A new report  from the Institute on Taxation and Economic Policy and Prosperity Now takes a look at the federal tax cut bill passed by Congress and signed into law last year by President Trump and its impact on growing the racial wealth gap. Previous reports have shown that the tax cuts in the Tax Cuts and Jobs Act (TCJA) were heavily tilted to the wealthy, while leaving very little for middle- and low-income families.

While the TCJA contributed to greater income inequality by gearing the bulk of its tax cuts to the very wealthy, it also contributed to the ever-growing racial wealth divide. Because America’s wealthiest families are overwhelmingly White, it is inevitable that a tax cut that benefits the wealthy would also benefit White households relative to the overall population and households of color. 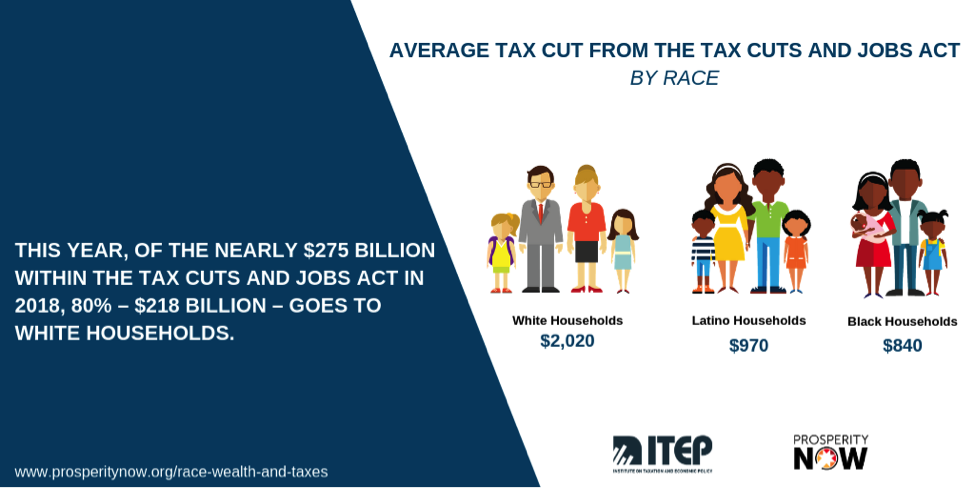 By concocting a tax reform that provides the vast majority of its benefits to the wealthy at the expense of low- and middle-income families Congress and President Trump have failed to provide these families, regardless of race, with the economic support they were promised. But also, by creating a law that concentrates an overwhelming amount of its benefits in the hands of wealthy, mostly White households, rather than providing the support needed to improve the economic circumstances of communities of color, the TCJA is actively making the racial wealth gap worse.