Blog Posts > Should West Virginia look to Virginia as a model for funding transportation?
October 17, 2013

Should West Virginia look to Virginia as a model for funding transportation?

The Charleston Gazette reported this morning that three West Virginia lawmakers are planning a trip to Richmond, Virginia to learn how they recently restructured funding for their ailing transportation system. According to a recent report by the Virginia-based Common Wealth Institute, there are several major flaws with the transportation funding package that was signed into law in Virginia this year. The major flaws cited in the report include  shifting the cost burden away from drivers, who benefit the most from the roads, tax increases that fall heavily on low and moderate income Virginians, and federal action that is unlikely to take place.

2) Increasing the statewide sales and use tax from 5 percent to 5.3 percent and to 6 percent in Northern Virginia and Hampton Roads.

3) Increasing the hybrid registration fee from $50 to $64 dollars on electric motor vehicles and establishes a new $64 fee on hybrid electric vehicles and alternative fuel cars.

4) Increasing the car titling fee from 3 percent to 4.15 percent.

5) The package also requires federal action to allow remote sellers in Virginia to collect and remit sales taxes on purchases by Virginia residents – also known as the Marketplace Fairness Act –  that would be diverted to the state’s transportation fund.  If federal action is not taken, the wholesale tax on gasoline increases from 3.5 percent to 5.1 percent.

6) Other regional provisions include implementing a “regional congestion fee” of 15 cents per $100 of property value and an increase in the hotel tax by 2 percent in Northern Virginia. In Hampton Roads, the whole sale tax on motor fuels would be increased by 2.1 percent beyond its current rate.

If Virginia’s transportation package works out how lawmakers intend, it would boost revenues by $6 billion over the next five years. Only 11 percent – $667 million – would come from driving-related revenues (whole sale tax on gasoline and diesel fuels) while over $3.2 billion would come from sales and use tax collections (statewide sales tax, remote seller legislation, and sales tax diversion). The increase in the hybrid registration fee only brings in $43 million while the car titling tax increase is expected to bring in $1.1 million. By replacing the cent-per-gallon tax and replacing it with a tax on the wholesale price fuels it stands to lose $847 million over the next five years. Relying so heavily on the sales tax for transportation funding – instead of the gasoline tax – Virginia is moving away from the longstanding tradition of using the benefits principle of taxation to fund roads.

As this Commonwealth Institute graph makes clear, these tax changes  would fall  heavily on low and moderate income families who struggling to make ends meet. For middle income households it would raise taxes by $80 statewide and by $150 for households in Northern Virginia and Hampton Roads region. 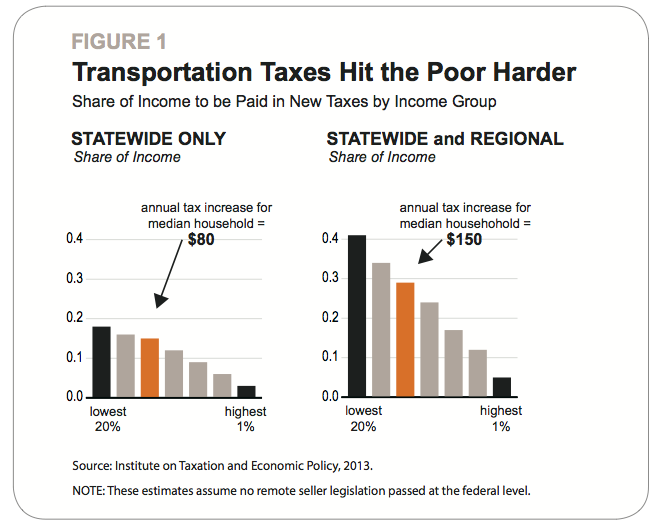 So, what can we learn from all of this?

First, it makes little sense to rely so heavily on revenue that depends on the U.S. House of Representatives to pass the Marketplace Fairness Act. If the debt default debacle has taught us anything, it’s that getting the House to pass anything with bi-partisan support is not easy.

Second, shifting transportation funding from its heaviest users (gas tax) to those who do not use the roads as much (sales tax) puts an undo burden on folks that are carpooling, use transit, walking to work, and those that are deciding to live near where they work. Moving away from the gas tax also means that it lets out of state drivers mostly off the hook. This is really important in West Virginia where we have a high share of out-of-state drivers.

Lastly, Virginia’s plan shifts the burden on those with the least ability to pay. As readers of this blog may know, state and local taxes are regressive and they already take a larger chunk out of low and moderate income families income that higher income families. By relying more heavily on low-income people who are barley able to make ends meet we are exacerbating income inequality.

While Virginia should be applauded for investing in its transportation system, it’s important for West Virginia lawmakers to learn from Virginia’s experience (and mistakes) so that we can equitably fund our transportation system which provides a solid foundation for economic growth and improves the quality of life in our state.

So far, it appears that the Governor’s Blue Ribbon Task Force is headed in the right direction by ensuring that out-of-state drivers pay their fair share and that we continue to tie our transportation funding to those that use our roads  the most while not placing an undo burden on those with the least ability to pay.

Correction: The hybrid registration fee for hybrid electric and alternative fuel vehicles is a new fee ($64), not one that was increased from $50 to $64 dollars. Thank you, Bill Tracey, for alerting me to this mistake.