Last month, the United States Department of Agriculture (USDA) and the Trump Administration unveiled their third attack in a year on the nation’s nutrition safety net, the Supplemental Nutrition Assistance Program (SNAP). This latest proposal would essentially force families to choose between paying their utilities and putting food on the table.

The proposed rule, which the USDA is currently accepting public comment on, would prevent states from establishing utility and housing allowances, which are used in determining SNAP benefits for families based on state-specific housing costs and needs. This provision, called the Standard Utility Allowance (SUA), is primarily utilized by low-income families, seniors, and people with disabilities who have significant housing and shelter costs, including utilities. States are able to use the current flexibility allowed within SUAs to assess how much income families have available to purchase food after accounting for their other household expenses.  If the USDA implements this rule, SNAP recipients in 29 states, including West Virginia, will lose $1.54 billion annually in critical food assistance. In addition to increasing food insecurity among the individuals and families who would be impacted by this proposal, the rule will also harm local retailers and grocers by reducing dollars spent on food budgets in communities around the country.

West Virginia is among the states that would be most negatively impacted by this new proposal. Over 71,000 households, or 43 percent of the approximately 167,000 households in WV that rely on SNAP, would have their benefits cut by an average of $30 per month or $360 per year. Overall, this proposal would cost the state $23 million annually in SNAP- dollars no longer feeding families or boosting local economies. The end result would be families forced to choose between buying food and paying their utility bills. 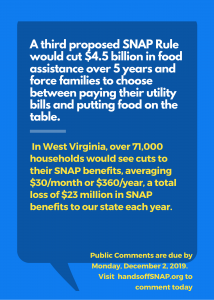 The proposal follows two other attempts this year by the Trump Administration to shrink SNAP, the country’s most effective anti-hunger program. First we saw a proposal that would reimpose time limits on SNAP benefits for individuals who are unable to meet strict work reporting requirements, which the USDA projected would result in 775,000 Americans going hungrier. In West Virginia, residents in 28 counties who are unable to document sufficient work hours face losing their food assistance, despite overwhelming evidence that these requirements only increase food insecurity and do nothing to help people find work.

Over the summer, a second proposed rule was released. This one would take away states’ ability to utilize categorical eligibility, or flexibility, in their SNAP programs. The USDA projects that three million individuals will lose SNAP benefits if this rule goes into effect. Dr. Joshua Lohnes of WVU detailed the potential impacts in West Virginia, where an estimated 25,000 residents will lose SNAP benefits. And just last month USDA had to reopen the public comment period for this rule after it was revealed that up to one million children are at risk of losing eligibility for free school lunches.

All of these rules taken together would result in billions of dollars of cuts to the SNAP program, harming individuals and families, further burdening charitable food providers, and weakening local economies. The onslaught of rules also reflects the Trump Administration’s ongoing efforts to sidestep Congress, which intentionally passed a Farm Bill without each of these harmful provisions in 2018.

The USDA is accepting public comments on the proposed rule to update SNAP Standard Utility Allowances through Monday, December 2, 2019. Comments can be submitted at handsoffSNAP.org.