USDA Proposed SNAP Rule Would Harm Residents and the Economy

Click here to see our full comments on the USDA’s proposed rule.

SNAP also lifts millions of families out of poverty, including 74,000 West Virginians. The food security offered by SNAP is critical, as West Virginia has not fully recovered from the recession. West Virginia was one of only two states to see an increase in the poverty rate from 2016 to 2017, with 19.1 percent of residents living below the poverty rate. Poverty is highest (32.9 percent) among West Virginians who did not graduate from high school, a population who is very likely to be affected by the USDA proposal.

The SNAP program relieves pressure on overwhelmed food banks, pantries, and other emergency food providers across the nation and in West Virginia. For every meal provided by the Feeding America network of foodbanks, SNAP provides twelve meals. The charitable and food bank sector simply would not be able to make up the loss of SNAP meals that would occur under the USDA proposed rule.

In 2016 and 2017, West Virginia implemented a pilot program in nine counties to place similar work and reporting requirements on the ABAWD population, and food pantries and soup kitchens saw drastic increases in need as the SNAP caseload declined. In Cabell County, one of the nine counties who was part of the pilot program, the Huntington City Mission saw a drastic increase in need when 1,131 individuals were removed from SNAP due to the time limits and work reporting requirements. The mission was forced to cut back to serving two hot meals per day rather than three. 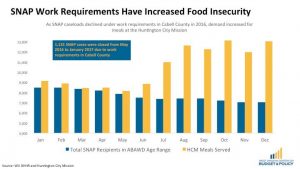 West Virginia currently has 37 counties who are waived from the ABAWD work and reporting requirements. If implemented, the changes in the proposed rule would mean that 28 of our currently-waived counties would lose their waivers in October 2019 due to their overall unemployment rate. 22 of these counties are designated as labor-surplus areas by the U.S. Department of Labor, meaning that they have unemployment rates that are at least 20 percent higher than the national average.

Data from the Bureau for Labor Statistics and American Community Survey shows that the average unemployment rates in the counties who would lose their waiver is 6.7 percent as of January 2019, which is significantly higher than the US average. The counties affected also experience high levels of overall poverty and a median household income far below the national average. Additionally, the counties affected are largely rural, and residents of these counties face significant barriers in access to public transportation, job training, and phone and internet access.

Volatile work hours and unstable employment are particularly common features of the jobs that employ working-class people who rely on SNAP. One indicator of this is the rate of involuntary part-time employment in the industries most likely to employee SNAP recipients (including home health aides, child care workers, retail salespersons, cooks, waiters, food preppers, maintenance workers, and janitors). The rate of involuntary part-time employment is very high in retail trade and leisure and hospitality work. In 2018, West Virginia had the second highest labor underutilization rate in the country at 9.8 percent.

Low-wage and working-class jobs are more likely to have schedules set by the employer with no possibility for change, unpredictable and irregular work, unpleasant or potentially dangerous work conditions, and a hostile/discriminatory work environment.

In an analysis of work requirement provisions in the 2018 House Farm Bill, researchers found that 9.8 million SNAP participants nationwide would be subject to the work requirement who do not work enough to meet it in at least one month during the year. Over half of those subject to the work reporting requirements, 5.1 million, do meet the requirement in at least one other month of the year but would still be at risk of losing SNAP benefits. This speaks to the volatility of low-wage jobs generally held by those who rely on SNAP and the importance of SNAP in sustaining food security during times of job and scheduling uncertainty.

West Virginia conducted a nine-county pilot program in 2016 and 2017 to voluntarily give up ABAWD waivers. The nine counties had an average unemployment rate of 5.5 percent in 2015 when the state’s Department of Health and Human Resources (DHHR) made the decision to re-implement ABAWD work reporting requirements in this counties. By 2017, the average unemployment rate in the nine counties was 6.7 percent and 15.6 percent of residents lived in poverty.

A report from the West Virginia DHHR stated, “Our best data does not indicate that the program has had a significant impact on employment figures for the ABAWD population in the 9 issuance-limited counties”. The agency also noted that they made 13,984 referrals to the SNAP E&T program during calendar year 2016. Of these, 259 gained employment while participating in the program. This indicates a success rate of 1.8 percent.

Over 5,400 West Virginians lost SNAP coverage in the nine county pilot in 2016, and the WV DHHR estimates that an additional 7,310 people would lose coverage if the waivers were lifted in the remaining counties across the state. The fact that this proposal did not budge unemployment in the nine-county pilot makes it very concerning to imagine it being implemented in an additional 28 counties who, by all indicators, are economically worse off. Additionally, West Virginia is one of only two states who saw an overall increase in poverty in 2018.

A growing body of research shows that vulnerable populations must have basic health and food security needs met in order to maintain steady employment- not the other way around. Years of experience, including in the nine county pilot here in West Virginia, have shown us that simply taking food assistance away from vulnerable populations does nothing to help them get back into the workforce. This proposal does not address the true barriers that are faced by the population who would be affected by this rule. Transportation, education, criminal history, mental and physical limitations, and lack of true training opportunities would all persist. Taking food away from people facing these barriers is only likely to make them worse off and less likely to engage in workforce participation.

If implemented, this proposal would harm individuals, communities, and the state and national economy. Rural economies rely on the federal dollars that SNAP brings into their communities, and struggling individuals are lifted out of poverty around the country by the food security provided by SNAP. Instead of making life harder for a population that is already facing challenges, federal agencies should address the root causes of chronic unemployment and lack of opportunity.