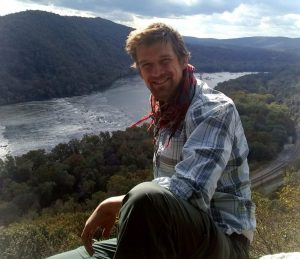 The Supplemental Nutrition Assistance Program (SNAP) is by far the most effective and reliable anti-hunger program in the United States. In West Virginia nearly 300,000 people rely on SNAP to source food from over 2,000 retailers across the state. The median household benefit is $208 each month, a mere $1.39 per person per meal. A third of all beneficiaries are children under the age of 18. The vast majority of participating households has at least one wage earner, often working in low-paying jobs that maintain them below the qualifying poverty threshold.

Households qualify for SNAP based on a number of factors including income, housing, childcare and utility expenses, household size and status. Federal law provides flexibility for states to adjust the program within certain limits and take advantage of administrative efficiencies that pair SNAP eligibility with other federal assistance programs such as Supplemental Security Income (SSI) or the Temporary Assistance to Needy Families (TANF) block grants. 42 jurisdictions have implemented these categorical eligibility provisions including West Virginia.

Through these provisions, called broad-based categorical eligibility, the West Virginia Department of Health and Human Resources (DHHR) is able to extend gross income limits from 130% of poverty to the maximum allowable 200%. It also relaxes asset limit tests that discourage program participants from saving for a rainy day. Such rules help mitigate the cliff effect that low-income families face when they suddenly lose access to the SNAP food budget they rely on to make ends meet due to slight changes in their household economy.

Last year, after significant work to achieve bi-partisan consensus, Congress maintained categorical eligibility provisions for SNAP in the 2018 Farm Bill. In direct opposition to this legislative process, the Trump administration published a proposed rule on July 24, 2019 that would eliminate the current flexibility provided to DHHR to administer SNAP and create a restrictive one-size-fits-all program that will have significant social and economic impacts in West Virginia.

The USDA Food and Nutrition Service estimates that approximately 9% of SNAP households will lose access to benefits under the proposed rule change, collectively impacting 5% of the overall funds allocated to the program. Loss of eligibility would be disproportionate among seniors (13.2%) and working families (12.5%). 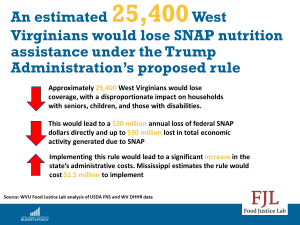 Though the full impacts are difficult to ascertain and DHHR has yet to publicly release its internal analysis, the Food Justice Lab at West Virginia University estimates that over 25,000 people would lose access to SNAP benefits resulting in a net reduction of nearly $20 million to the state’s food economy each year. Because SNAP is an economic multiplier the overall negative impact to GDP in the state may well run as high as $30 million. 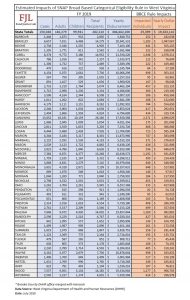 At a time when rural grocers are already struggling under increased competitive pressures in the food retail sector, the SNAP revenue losses in the state will exacerbate the food desert problems faced by many households vulnerable to food insecurity. Furthermore, the sudden loss of access to vital food resources will increase pressure on the state’s charitable food infrastructure which is already underfunded and stretched thin.

The impacts on DHHR will also be significant. Nationally, the rule would increase federal and state administrative costs by $2.3 billion a year, and increase inefficiencies in service delivery. Reorganizing eligibility standards will require significant internal changes to the SNAP application process and increase burdens on local county staff, creating delays in benefit approval for those households that do qualify for food assistance.

Public comment on the rule is open until September 23, 2019.