In May of 2016, West Virginia enacted a time limit on SNAP benefits for childless adults in the 9 counties with the lowest unemployment. Those 9 counties were Berkeley, Cabell, Harrison, Jefferson, Kanawha, Marion, Monongalia, Morgan and Putnam. While proponents maintained that cutting low-income childless adults from SNAP would boost employment, there is no evidence this happened. In fact, it appears that all it did was take food assistance away from people who face unique barriers to employment, increasing food insecurity across the board.

Food insecurity is directly linked to a host of other problems, including poor health outcomes and a negative impact on the ability of children to learn while they are in school. Policies that increase food insecurity by cutting low-income people off of SNAP also have a negative economic impact, as SNAP benefits are 100% federally subsidized and have an economic multiplier of $1.79 for every dollar spent.

A WV Department of Health and Human Resources analysis of the 9-County pilot on work requirements estimated that by removing more than 5400 recipients from SNAP through the time limit, more than $13 million federal food assistance dollars were eliminated annually from local economies. When adjusted for the multiplier effect, this amounts to a yearly, negative economic impact of almost $24 million dollars, and that’s just from the 9-County pilot. 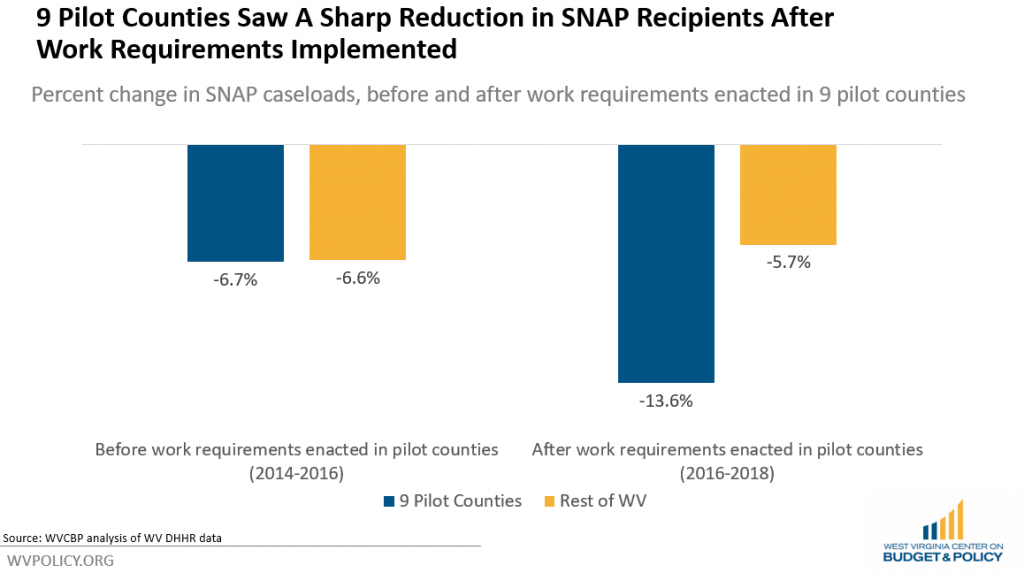 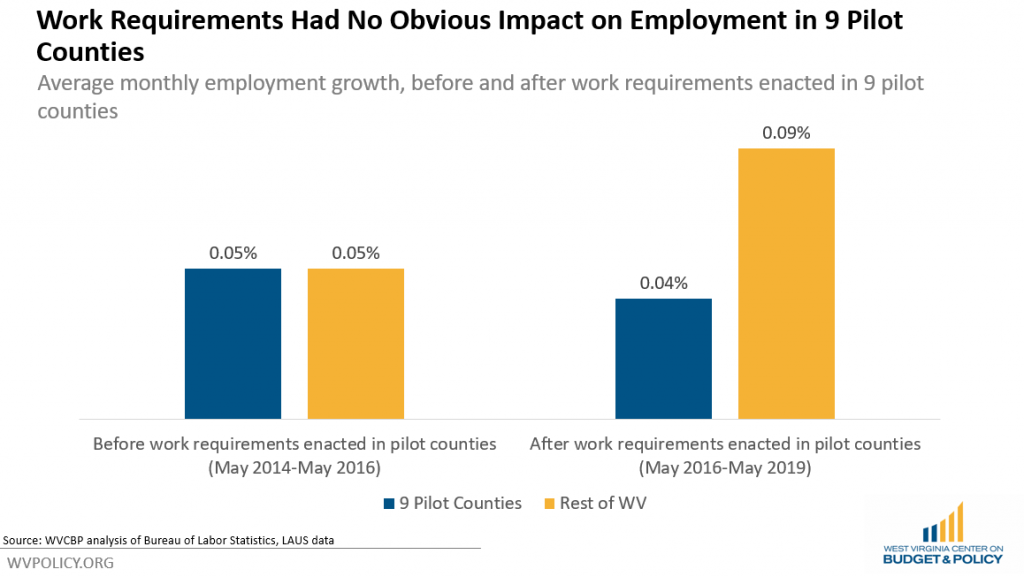 While the work requirements showed no impact on the number of people working in the 9 pilot counties, they also had no noticeable impact on encouraging people to look for work. The size of the labor force in the 9 pilot counties, or the number of people either working or looking for work, increased by only 1,500 people during the three years since the work requirements went into effect, an increase of roughly 0.53 percent. DHHR’s own estimate of childless adults removed from the SNAP program in the 9 county pilot during 2016 was over 5,400. In contrast, the labor force in the other 46 counties grew by 1.24 percent during that same time period. Again, there is no sign that the work requirements encouraged people to enter the labor force and find work.

There is, however, strong evidence the 9 county pilot increased demand at West Virginia’s food banks, hurting food security across the board. An analysis from WV Foodlink showed increases in demand at food banks and soup kitchens (upwards of 29%) in the 9 counties impacted by the pilot. For example, in Cabell County, which saw SNAP enrollment decline by 1,100 people when the work requirement was implemented, the Huntington City Mission had to cut back meal services from three to two per day because of increases in demand. 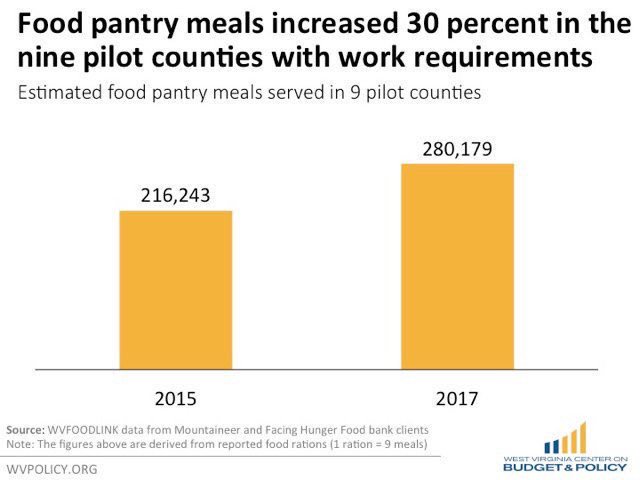 Despite no evidence showing that taking away federal food assistance helps improve employment outcomes for low-income childless adults, West Virginia is doubling down by expanding SNAP time limits for childless adults to more counties. During the 2018 regular session, the legislature passed and the governor quietly signed House Bill 4001, which would further roll out SNAP time limits. Counties meeting the criteria for proposed expansion of SNAP time limits at the time of the bill’s passage were Doddridge, Greenbrier, Hampshire, Monroe, Ohio, Pendleton, Preston, Taylor and Tucker.

While a complete analysis of SNAP enrollment for 2019 will be done when all the data is available, a quick look at food pantry visits paints an ominous picture, especially considering the more rural nature of many of the proposed expansion counties vs. that of the original 9 counties in the pilot project. With the expansion of SNAP time limits for the new proposed counties rolled out in early 2019, let’s have a look at some initial numbers from folks directly on the ground. 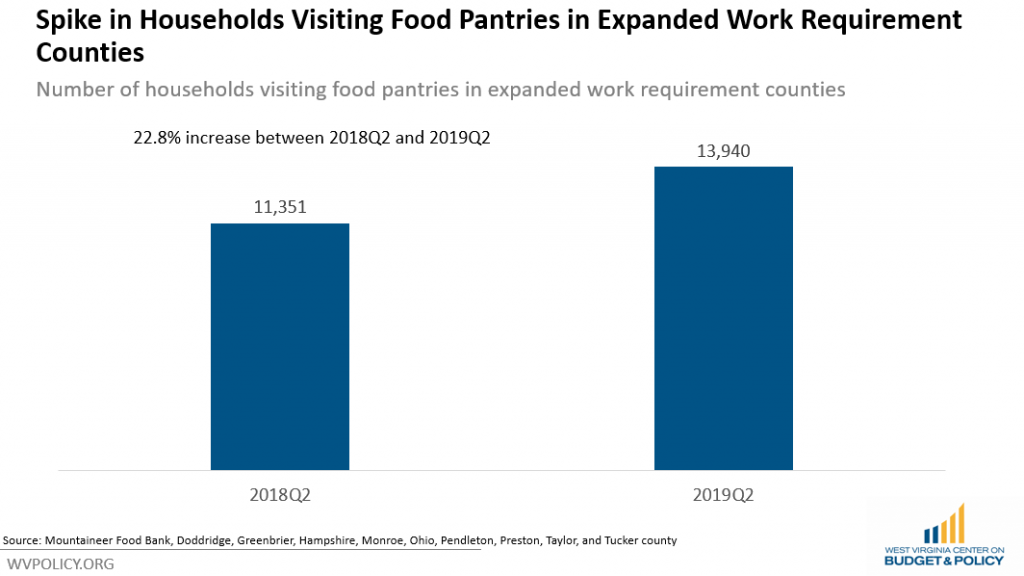 This comes at a very distressing time, with trade wars stoking fears of a recession, and West Virginia suffering from some of the highest poverty in the nation. Policymakers should be making access to safety net programs easier, not harder.

Furthermore, it’s time for a data-driven approach that invests in our people with good-paying stable jobs. Clearly the data from the 9 county pilot shows that SNAP time limits do not expand employment or the labor force, and early indicators from the expansion of this policy failure are only showing more of the same: increased demand on our community food banks that they are unable to meet and millions of federal food assistance dollars removed from West Virginia’s economy. Instead of increasing food insecurity, policymakers should pass legislation to improve access to summer meals for West Virginia’s children, expand access to hot meals for certain SNAP recipients, invest in the ability of families to capitalize on SNAP dollars when they shop at local farmer’s markets, and close the Senior SNAP gap.