The Profits of Non-Profit Hospitals

Hospitals serve a vital role in any community, providing life-saving care to the injured and ill while contributing significant dollars and hours to community service.  For example, an article in yesterday’s Charleston Daily Mail proclaims that the Charleston Area Medical Center (CAMC) “reports $115 million in area benefit” in 2012.  These benefits included training classes for hospitals and clinicians around the state, charity care, and other community health improvement services.

On top of that, hospitals also tend to be huge economic drivers, often being the largest employers in a region, providing good paying jobs that stimulate the local economy.  Most hospitals in West Virginia are also non-profit, meaning they are not required to pay most federal, state, or local taxes.  As non-profits, they do not answer to a Board of Shareholders or need to worry about their stock prices or quarterly dividend payments, however, that doesn’t mean they have no concern about their bottom line.

The 10 largest non-profit hospitals in West Virginia generated a combined $3.4 billion in gross revenue in 2011. 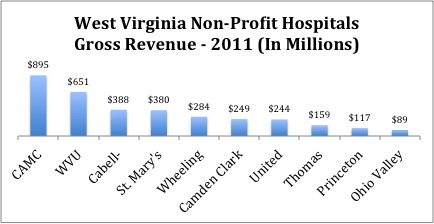 Of that $3.4 billion in total revenue, $227 million was net profit after all expenses, which includes salaries, charity care, bad debt, operating costs, and everything else. 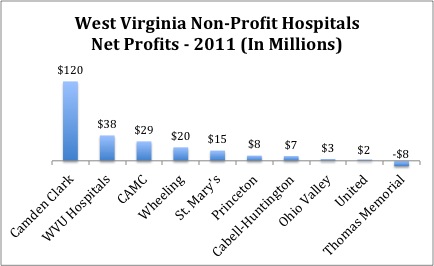 Running a large hospital is certainly a daunting challenge, which means that hospital CEOs and other administrators are often well compensated.  For better or worse, most of these CEOs have backgrounds in business management with no clinical experience as physicians or nurses.  The total compensation in 2011 for the CEOs of the largest non-profits in West Virginia is found in the chart below. 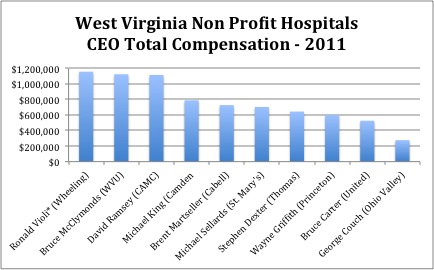 Source: IRS 990 filings, accessed at www.guidestar.org, 2011 most recent year for which reports were available.

*Wheeling Hospital CEO Ronald Violi is paid as a contract employee through his consulting firm R&V Associates. Wheeling Hospital states his salary as CEO was $1,155,000 in 2011, however his firm received total compensation of $3,529,030 directly from the hospital, for “services as CEO and other consulting services.”

Earlier this year, the mayor of Pittsburgh made headlines when he announced he would be challenging the University of Pittsburgh Medical Center’s tax-exempt status, claiming the hospital does not perform enough charity care for the nearly $6 billion in gross revenue it takes in annually.  His position does not come without precedent, however, as a number of cities around the country have begun exploring Payment in Lieu of Taxes, or PILOT, programs.  PILOTs target non-profit organizations like hospitals and universities that often generate millions of dollars or more yearly but do not pay local property or income taxes. According to the Lincoln Institute of Land Policy, which has published a number of reports on the topic, non-profits may provide essential benefits to the people of a city, region or state yet they still pose a cost on the municipalities in which they are located by consuming public services, such as police protection and roads.
While going so far as to challenge a hospital’s non-profit status in West Virginia is overkill, it may be worth examining PILOTs around the state, especially as municipal budgets continue to shrink and hospitals continue to grow.
EDIT: Updated CEO compensation graph to reflect officially listed salary of Ronald Violi at Wheeling Hospital rather than the $3.5 million his consulting firm received as initially posted.-bm
WVCBP
Categories: Blog, Health
Published on August 7, 2013
Donate Today!