Blog Posts > Revenue Is Not Keeping Pace With State’s Economy Because of Tax Cuts
December 20, 2016

Recent data shows that West Virginia’s economy remains sluggish. While nonfarm employment grew by a little over 10,000 jobs in November, this was almost entirely driven largely by a huge jump in local government employment from temporary hiring of election workers. According to the Bureau of Economic Analysis, personal income growth in West Virginia grew by only 0.8 percent from 2nd quarter of 2016 to the 3rd quarter of 2016. The biggest factors in West Virginia’s sluggish personal income growth over this period was declines in state and local earnings from depressed state spending, along with lower mining earnings from declining coal production and low natural prices.

While the state’s economy is struggling to grow jobs, the aggregate amount of income in the state’s economy has grown. Between 2010 and 2016, per capita income grew from $31,579 to $37,189. This is difference of about $2,225 after adjusting for inflation. Despite growth in income in West Virginia, the state is collecting far less tax revenue. 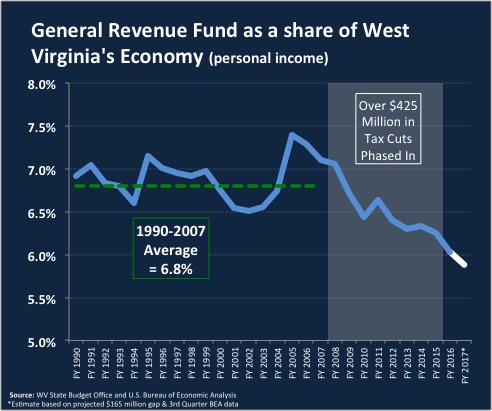 One of the central factors behind this large drop in revenue collections as a share of the economy is major tax cuts that were enacted between 2007 and 2015. This included the phase out of the business franchise tax and grocery tax on food, along with the reduction of the corporate net income tax rate to 6.5 percent from 9 percent and some smaller reductions. All together, it is estimated that these tax cuts have resulted in at least $425 million in lost annual revenue. If West Virginia was collecting the average share of personal income it did before the tax cuts (FY1990 to FY2007), the state’s general revenue fund would have an additional $627 million in revenue. This is  $200 million more than the projected $400 million budget gap the state is facing next year.

To get our state’s fiscal house in order, and to avoid more harmful cuts that are holding our economic recovery back, lawmakers will have to deal with the state’s growing revenue and investment problem. This means raising taxes on things that are making our state unhealthy, asking the wealthy and large corporations to pay their fair share, and closing loopholes in our sales and corporate income tax. Without additional needed revenue, the state will likely continue to cut investments in schools, roads, public colleges, and public safety.