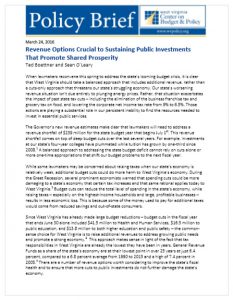 When lawmakers reconvene this spring to address the state’s looming budget crisis, it is clear that West Virginia should take a balanced approach that includes additional revenue, rather than a cuts-only approach that threatens our state’s struggling economy. Our state’s worsening revenue situation isn’t due entirely to plunging energy prices. Rather, that situation exacerbates the impact of past state tax cuts – including the elimination of the business franchise tax and grocery tax on food, and lowering the corporate net income tax rate from 9% to 6.5%. Those actions are playing a substantial role in our persistent inability to find the resources needed to invest in essential public services. Read PDF of report.

The Governor’s new revenue estimates make clear that lawmakers will need to address a revenue shortfall of $239 million for the state budget year that begins July 1st. This revenue shortfall comes on top of deep budget cuts over the last several years. For example, investments at our state’s four-year colleges have plummeted while tuition has grown by one-third since 2008. A balanced approach to addressing the state budget deficit cannot rely on cuts alone or more one-time appropriations that shift our budget problems to the next fiscal year.

While some lawmakers may be concerned about raising taxes when our state’s economy is relatively weak, additional budget cuts could do more harm to West Virginia’s economy. During the Great Recession, several prominent economists warned that spending cuts could be more damaging to a state’s economy that certain tax increases and that same rational applies today to West Virginia. Budget cuts can reduce the total level of spending in the state’s economy, while raising taxes – especially on the highest-income households and large, profitable businesses – results in less economic loss. This is because some of the money used to pay for additional taxes would come from reduced savings and out-of-state consumers.

Since West Virginia has already made large budget reductions – budget cuts in the fiscal year that ends June 30 alone included $41.5 million to Health and Human Services, $16.5 million to public education, and $13.8 million to both higher education and public safety – the common-sense choice for West Virginia is to raise additional revenues to address growing public needs and promote a strong economy.  This approach makes sense in light of the fact that tax responsibilities in West Virginia are already the lowest they have been in years. General Revenue Funds as a share of the state’s economy are at their lowest point in over 25 years at just 6.4 percent, compared to a 6.8 percent average from 1990 to 2015 and a high of 7.4 percent in 2005. There are a number of revenue options worth considering to improve the state’s fiscal health and to ensure that more cuts to public investments do not further damage the state’s economy.

Apply the sales tax to digital downloads: West Virginia has not updated its sales tax to reflect today’s economy. A good step is to cover various goods and services sold and delivered on the Internet – including books, music, movies, and other digital products downloaded electronically. There is an element of equity here because West Virginia taxes the sales of identical items sold in stores. This change would also slightly reduce the extent to which the sales tax falls disproportionally on lower-income households, since most digital goods are more likely to be purchased by higher-income households that make more online purchases. According to the West Virginia Tax Department, the revenue forgone from this exclusion is $10 million per year.

Scale back personal income tax exemptions: West Virginians are provided a $2,000 personal exemption from their state income tax for each household member. Unlike the federal government, which phases out personal exemptions as income rises, West Virginia does not. If the $2,000 per person exemption were phased out for joint filers between $150,000 and $200,000 and eliminated for those over $200,000, it would increase revenue by an estimated $9.9 million and help make the state’s income tax based more on the ability to pay.

Modernize Personal Income Tax Rates and Brackets: West Virginia’s personal income tax schedule has not changed since 1987, when the state’s top personal income rate was reduced from 13 to 6.5 percent. Adjusting brackets and rates would better reflect modern income levels. This could include adopting a new bracket for higher-income earners and perhaps even lower rates for low- and middle-income residents. For example, a new top bracket of 7.4 percent on taxable income above $150,000 would increase revenue by an estimated $44.8 million.

Increase tobacco taxes: Governor Tomblin’s proposal of a modest tax increase on various tobacco products won’t be enough to provide long-term funding for services such as Medicaid nor will it help reduce health care costs and save lives associated with tobacco use. Increasing the cigarette tax to $1.55 per pack from 55 cents, the wholesale tax on other tobacco products to 50 percent from seven percent, and instituting a 7.5-cent per milliliter tax on electronic cigarettes would provide an additional $61 million beyond Governor Tomblin’s tobacco tax proposal, bringing the total to $139 million.

Increase the Soda Tax: West Virginia levies an excise tax of one cent on each 16.9 fluid ounces of bottled soft drinks, 80 cents per gallon of soft drink syrup, and one-cent per 28.35 grams of dry mixture for making soft drinks. Bipartisan legislation introduced in the state Senate (SB 604) in 2016 would have raised these taxes five-fold and increased state revenue by an estimated $50.5 million in the next fiscal year. While a soda tax is not a silver bullet for addressing the state’s childhood obesity epidemic, it can, by raising the price of unhealthy beverages, reduce consumption, improve health – especially among low-income populations – and provide much needed revenue for Medicaid in West Virginia.

Because many of the above revenue options would fall harder on households with lower incomes, policymakers should couple any of these tax increases – including excise taxes and sales tax increases – with a bottom-up tax cut for working families.

Here’s how — Enact a West Virginia Earned Income Tax Credit (EITC): Twenty-six states and the District of Columbia have enacted Earned Income Tax Credits for working people to help them offset the cost of the various state and local taxes they pay.  The EITC is a proven tool to fight poverty, increase labor force participation, and help low-income working families afford necessities. The benefits are lasting, such as improving the health, educational achievement, and earnings of children who are EITC recipients.  A state EITC at 15 percent of the federal credit would cost approximately $47 million and could be paired with a tobacco tax increase or a sales tax increase to help offset the impact of other taxes that hit hardest at low income levels.

When all state and local taxes are considered, low-income households pay a higher share of their income in taxes than the wealthy. West Virginia has the opportunity to turn that upside-down system right-side up and raise resources needed to invest in broad prosperity. That is a far better option than more cuts to services essential to West Virginians.

See Peter Orszag and Joseph Stiglitz, “Budget Cuts vs. Tax Increases at the State Level: Is One More Counter-Pro­ductive than the other during a recession?” Center on Budget and Policy Priorities revised November 6, 2008, Retrieved from http://www.cbpp.org/archiveSite/10-30-01sfp.pdf; and John Buhl, “Economist Tells Governors to Consider Tax Increases to Balance Budgets,” Tax Analysts, Febru­ary 23, 2010.

Estimates provided by the Institute for Taxation and Economic Policy.