Momentum for Paid Leave is Growing in West Virginia: A Breakdown of State-Level Proposals

Too often, West Virginians are forced to choose between financial/job security and taking care of themselves, a new child, or a seriously ill family member. Recognizing these problems, legislators have introduced three strong bills this session to provide paid family and medical leave (PFML). PFML policies help families achieve financial security, strengthen businesses and the public-sector, and grow the economy.

Currently, only about 16 percent of private-sector workers nationally have access to paid family and medical leave. While the 1993 Family and Medical Leave Act (FMLA) provides eligible workers with an entitlement to unpaid leave for family health and caregiving needs, unpaid leave is often unworkable for families struggling to stay afloat when a new child arrives or serious illness strikes. Further, not every worker is eligible for FMLA. 61 percent of West Virginians cannot utilize FMLA, meaning they have no access to paid or unpaid leave, either because of their employer size or because they cannot afford to take unpaid leave. This is a problem for families and our economy as paid leave encourages labor force participation, especially among women and low-wage workers, keeping businesses stable and increasing employment rates in communities.

(1) Parental leave, which can be used when a child is born, adopted, or fostered;

(2) Illness leave, or time off when the worker has his/her own chronic or serious illness;

(3) Caregiving leave, when a worker needs time off to provide care for a seriously ill family member; and

(4) Military exigency leave, when a spouse or family member takes time off to prepare for their family member’s deployment or for rest and recuperation (R&R) leave.

House Bill 4189 would provide state employees and public school teachers with up to twelve weeks of paid leave for the birth or adoption of a child. Initially, the bill included paid leave for public sector workers who need caregiving leave, or time off to care for a seriously ill family member. That provision was removed in the House Judiciary committee due to cost concerns.

HB 4189 also does not offer paid leave for the employee’s own illness, likely because it mirrors the unpaid leave that state workers are currently entitled to under the state’s Parental Leave Act. Employees who need paid time off for their own illnesses may be covered by short-term disability, but this benefit is optional and the cost is fully paid for by the employee. This means that an unplanned serious illness, as often happens, may leave a worker without any access to paid leave if they could not afford or chose not to take the coverage during their open enrollment.

Caregiving leave only represents a small fraction of leaves taken by workers, but it is a critical aspect of a system that prioritizes families and financial security, especially in an aging state like West Virginia. 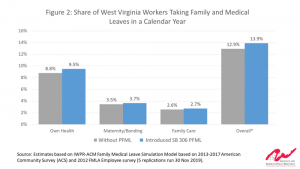 According to the fiscal note discussed in committee but not released as of publication, the bill as stands with paid parental leave for state employees and public school teachers will cost approximately $5 million each year.

According to an Institute for Women’s Policy Research (IWPR) actuarial analysis, approximately 2.7 percent of workers would utilize caregiving leave were it offered and would take an average of 3.8 weeks off per year. Based on those estimates and the average weekly wages of the state’s 41,000 state employees, caregiving leave could be expected to cost an additional $3.6 million, though that estimate does not account for the fact that the bill requires public employees to exhaust all of their paid sick time and personal time before utilizing the leave provided under this bill. Public employees can carry over up to 320 hours (8 weeks) of personal leave from year to year and unlimited amounts of sick leave, so presumably many public employees wouldn’t exhaust their banked time in order to begin using the paid leave provided by this policy.

For example, if the average public employee has 10 days of combined sick and personal leave that they must exhaust before utilizing this program, the caregiving leave cost drops to $1.7 million annually.

This bill comes on the heels of similar proposals from Tennessee and New Mexico, where governors of both states issued executive orders granting paid leave to state employees. While funding for the Tennessee program is unclear, New Mexico’s is estimated to cost under $5 million annually,

While this bill could be strengthened by reintegrating paid caregiving leave, adding coverage for paid time off when a foster child is placed with a family, expanding the definition of covered family members to include unmarried partners and leave for grandparents who have caregiving responsibilities for grandchildren, and by covering military exigency leave, passage of HB 4189 would reflect a step forward for West Virginia and a significant new support for the state’s public employees.

Two additional bills (SB 65/HB 4385) have been introduced during this session that would provide up to twelve weeks of comprehensive paid leave for private- and public-sector workers and self-employed individuals, including when a child is born, adopted or fostered, the employee’s own chronic illness, for caregiving of a family member with a serious illness, and for military exigencies.

These bills would be funded by a joint contribution from employers and employees into an insurance fund. The joint contribution cost per employee is approximately 0.62% of the worker’s salary, on average under $3 per employee per week. When a worker takes paid family and medical leave, their wage replacement comes out of the insurance fund and is is replaced at 67 percent of their regular weekly wage.

The PFML program is self-sustaining, meaning that the contributions cover both workers’ wage replacement while on leave and the administrative costs to the state of running the program. The funding mechanism in the bill sets aside 5 percent of the program cost for administrative costs (approximately $8 million/year), which is also funded through the joint employer/employee contribution. 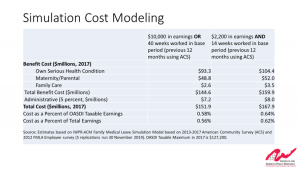 These bills are strong because they cover all four areas of leave that may be needed by a worker, and they would extend the paid leave benefit to nearly all West Virginia workers, including those in the public- and private-sector.

Nine states including the District of Columbia have similar paid leave laws. Surveys in states that have implemented these programs show reduced employee turnover and increased worker morale and productivity, making these policies good for workers and families, employers, and our overall economy.

No worker should have to choose between their own health, or that of a family member, and their job. Enacting paid leave policies in West Virginia will help to ensure that workers and families can be both healthy and financially secure. 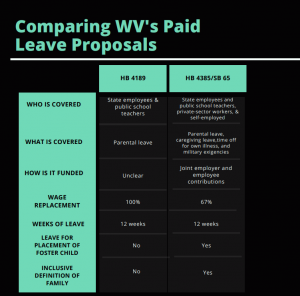