How is West Virginia Balancing its FY 2016 Budget?

On Tuesday, Governor Tomblin announced at a bi-partisan press conference that he is proposing to transfer $44 million from the teacher’s retirement account (TERS) to help close an estimated $195 million gap in the FY 2016 state budget.

The state is able to use the $44 million from TERS, according to the governor, because the investment returns where higher than expected. Originally, the governor’s proposed using $68.6 million from Rainy Day Fund A  to balance the budget, but now the plan is to use just $24.6 million. The announcement came on the heels of warnings from Senate President Bill Cole, House Speaker Tim Armstead and Senate Minority Leader Jeff Kessler that they did not want to balance the budget using money from the rainy day fund.

If not taking money from the state’s rainy day fund stems from the idea that credit rating agencies could possibly downgrade the state’s credit score, it is not clear that rating agencies would prefer the state to take money from its pension accounts as opposed to its rainy day fund (they’re assets on a balance sheet). While TERS has had an above-average investment rate of return this year, it may not have the same success next year. If the pension fund goes below its assumed 7.5 percent investment rate of return next year, the state may have to appropriate more to the teacher’s retirement account next year.

Below is a breakdown of how the governor plans to close the estimated $195 million gap in the base budget, which includes general revenue, lottery funds, and special revenue accounts. On top of the $44 million from TERS and the $25 million from the rainy day fund to fund the state’s share of Medicaid, he is proposing $18.3 million from surplus lottery to go toward Medicaid, $24 million in additional revenue from statutory changes (redirecting $19.5 million from Consumer Sales and Use Tax revenue from Road Fund and School Building Authority , $4.3 from the Corporation Net Income Tax that went to the Public Port Authority, and $0.5 million in severance taxes transferred from Infrastructure Bond Fond), $11.9 million in other base-budget adjustments, and $72.1 million in base-budget cuts. 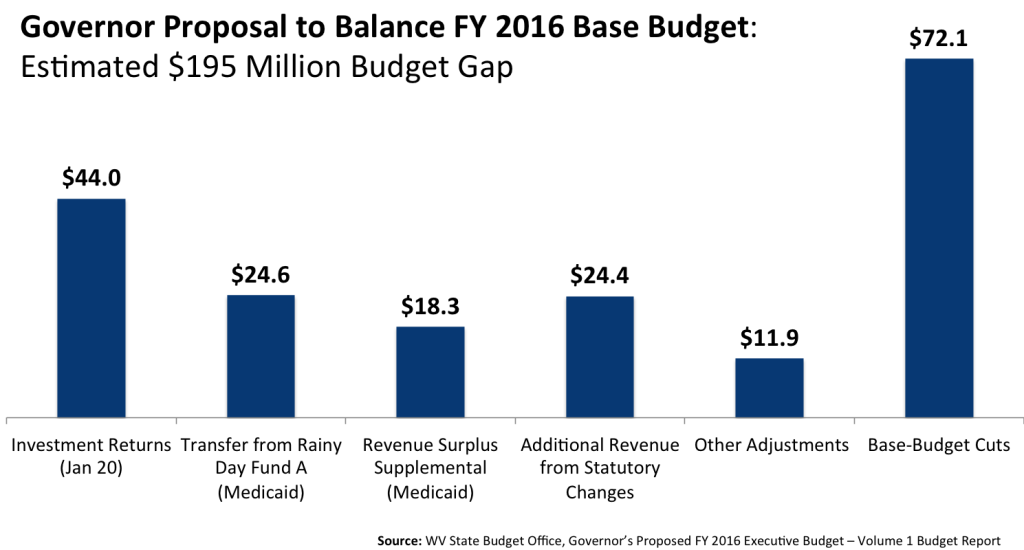 The major budget cuts include: $12.2 million for higher education, $3.6 million for primary care support, $2.1 million for Health Right Free Clinics, $1.9 million in local economic development assistance, $943,431 for behavioral health, and over $800,000 in budget bill changes to family programs. The governor is also reducing appropriations sent to local school boards via the school aid formula by $63 million, largely because of a drop in school enrollment that allows less state aid to public schools.

As we’ve noted for several years (see here, here, and here), the budget cuts this year and over the last decade are primarily due to a slew of tax cuts that were enacted in 2006 and 2007, including the repeal of the grocery tax, phase-out of the business franchise tax, and the reduction in the corporate net income tax rate. These tax cuts, along with the impact of the Great Recession, have been downward pressure on the state’s revenues and have led the governor and legislature to scramble each year looking for pots of money.