With faltering revenue collections, Governor Justice has ordered a $100 million budget cut for the current budget year, with more cuts likely for the FY 2021 budget. And, as with past budget cuts, higher education appears to be a prime target. This is all happening on the heels of a new report from the Center on Budget and Policy Priorities detailing how state budget cuts have increased the costs of higher education and worsened inequality, particularly in West Virginia.

After a decade of cuts to public colleges and universities, tuition continues to rise and West Virginia students and families are struggling to find ways to pay. Students who already face the greatest economic and racial barriers to higher education are particularly at risk, with cuts and rising tuition jeopardizing West Virginians’ futures and communities.

These cuts have helped drive up the cost of public colleges and universities, imposing the greatest cost burden on families of color and those with low incomes. Average published tuition at public four-year universities in West Virginia grew by 52.8% between 2008 and 2018 after adjusting for inflation. Meanwhile, median household income for West Virginians has remained stagnant for nearly two decades. West Virginia was one of 12 states where tuition has increased by more than 50%.

West Virginia can increase the skills and diversity of its workforce, and dramatically improve the future of its children and communities, by restoring higher education funding and making it more affordable. What the state should avoid is more costly business tax cuts, like the renewed attempt to remove property taxes on business inventory and machinery. The end result of business tax cuts is never the promised economic growth, but hundreds of millions of dollars in lost revenue and cuts to areas of the budget like higher education.

In fact, West Virginia has the opportunity to move in the opposite direction. While the state recently passed a $64.5 million severance tax cut for coal that has so far failed to “bring coal back,” or even prevent further bankruptcies, and is eyeing a potential business property tax cut that could cost up to $400 million. However, the costs of these tax cuts, even in a scaled back form, is far more than reducing the cost of higher education. In fact, the tax cuts are more expensive than simply making four-year public colleges in West Virginia tuition-free for instate students.

Last year, the state passed SB 1, which using a “last dollar in” approach, provides free in-state college tuition at the state’s community and technical colleges to qualified applicants, at a cost of about $8 million annually. As we’ve pointed out before, expanding free in-state tuition of all public colleges is surprisingly affordable, especially compared to the costs of business tax cuts.

According to the WV Higher Education Policy Commission, in 2017 there were approximately 30,952 in-state undergraduate students in West Virginia’s four-year public colleges and universities. The total estimated cost of full tuition for these students is about $242.2 million.

But that is not what it would cost the state to provide free tuition. West Virginia already provides financial assistance to college students through the PROMISE scholarship, the Higher Education Adult Part-Time Student (HEAPS) Grant Program, and the West Virginia Higher Education Grant (WVHEG) Program. The estimated costs of these programs for students in four-year public colleges and universities is $60.5 million. Since the state is already spending $60.5 million on financial assistance for these students, that would bring the net cost of free tuition for all West Virginia students down to $181.6 million.

Applying both Pell Grants and the state’s PROMISE, WVGEG, and HEAPS programs drops the total cost of free tuition for all West Virginia students down to $129 million, less than last year’s proposal to eliminate the personal property tax on industrial machinery, inventory and equipment, which would have cost $140 million annually, and, as mentioned, is likely to be revived this upcoming session, and far less than the current ongoing costs of the cuts to the corporate income and business franchise taxes.

Another potential option is to charge all students a flat rate. For example, if each student was required to pay $1,000, the total cost of eliminating the rest of tuition at four-year colleges for in-state students would be just $98.5 million. 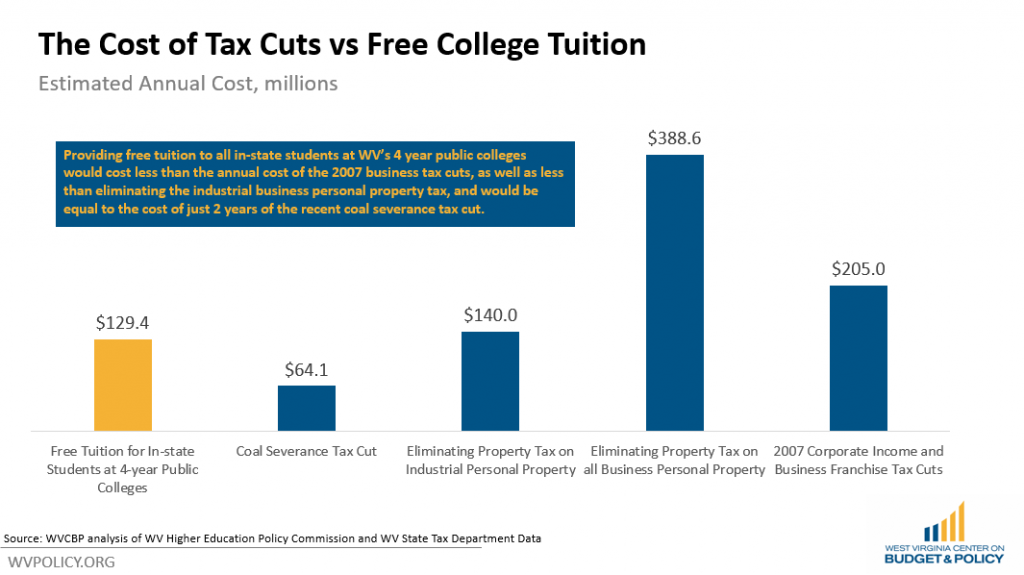