SJR 9 Another Business Tax Cut Unlikely to Pay Off

This week the Senate introduced SJR 9, or the Just Cut Taxes and Win Amendment. SJR 9 would call for a constitutional amendment to eliminate the business personal property tax for certain industries. As you might tell from the title of the resolution, this is the state’s latest effort to spur job and economic growth through business tax cuts, and the latest in a long line of attempts to eliminate the business personal property tax.

In order for the amendment to be placed on the ballot, it would require the approval of two-thirds of legislators in the Senate (23 out of 34 members) and House (66 out of 100 members). To be ratified, a simple majority of voters is needed.

As we’ve noted before, simply eliminating the business personal property tax without replacing the revenue would be a fiscal disaster for local governments and schools, which rely heavily on property taxes. SJR 9 gets around this problem by requiring the state to distribute replacement revenue to counties, municipalities, and schools. The replacement revenue would start out at $20 million in the first year of the phase out and reach $140 million per year once the tax is fully phased out.

So while paying for the replacement revenue due to the tax cut will likely result in tax increases or program cuts at the state level, it is unlikely that the tax cut will do much to generate economic growth.

Academic research largely does not support the claim that state and local business taxes significantly affect economic growth. Even studies that examined state-level inventory and other personal property taxes concluded they rarely impact business location decisions or have a significant effect on employment in manufacturing, wholesale, and retail industries (see here, here, and here). In fact, in the past 5 years, more manufacturing jobs have been added in states with the “job-killing” business inventory and equipment tax than in states without it. 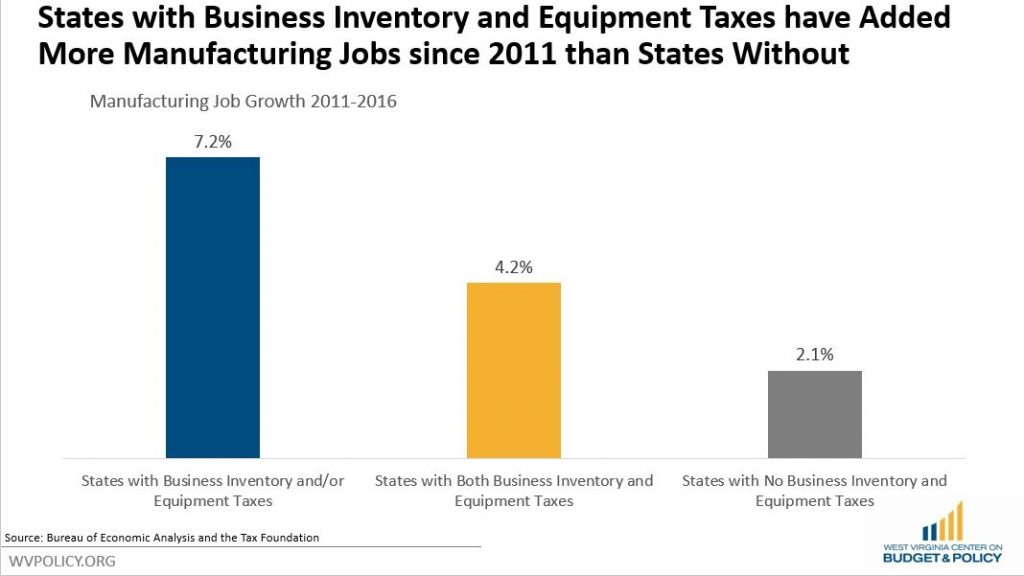 One reason the job-killer label for the business personal property tax doesn’t hold water is that fact that it is highly exportable. According to the state of Minnesota’s tax incidence model, 75 percent of their industrial property tax burden is exported out of state. The benefits of cutting or eliminating the tax would be felt elsewhere, not in West Virginia.

SJR 9 would also introduce inequity in our property tax system. Under the current system, all business machinery, equipment, fixtures, and inventory is assessed and taxed at the same rate. SJR 9 would change that, giving preferential tax treatment to the manufacturing, coal, and natural gas industries.

West Virginia has a broad property base, with low and equal rates, that result in tax burden directly proportional to a business’s property value. SJR 9 would create a narrower property tax base, with unequal rates, and a burden more influenced by what type of property a business owned and what industry it is in, rather than its value.

The state’s ability to generate revenue and invest in its many needs has been already been compromised by hundreds of millions in business tax cuts and that have not delivered on their promise. Further eroding state and local revenues can only have more detrimental effects.