Governor Jim Justice has not introduced any tax measures yet, but in his State of the State Address and his executive budget  there are plans to enact several tax increases to close the Fiscal Year 2018 budget gap of $500 million and address the state’s declining road fund that pays for highway construction, maintenance, and road repairs. This includes an estimated $450.2 million in the proposed general revenue fund revenue enhancements and $177 million in new revenue for the state road fund. While Governor Justice should be commended for putting forth much-needed revenue to address the state’s growing budget crisis, the combined impact of his tax increases will fall harder on low-income West Virginians. Instead of just relying on regressive tax measures, Governor Justice should include revenue enhancements that ask a little more from the folks that have received most of the income gains in the state over the last several decades.

The specifics of the revenue enhancements listed above are unknown, but it is clear that the brunt of the changes will fall harder on low-income West Virginians compared to those with higher incomes. The chart below illustrates this point by looking at the tax impact of the proposed sales tax changes, enactment of a new commercial activities tax, and the 10 cent gas tax increase. For West Virginians that only make $11,000 annually (lowest 20 percent), they will pay on average 1.3 percent more of their income in additional taxes or $133 dollars. For West Virginians in the top one percent who make on average $778,000, they will pay an additional 0.2 percent of their income in taxes under Justice’s revenue plan. While the amount of taxes paid by income group increases with income, the tax change as a share of income decreases – meaning that it takes a larger bit out of low and middle income taxpayers than higher income West Virginians. 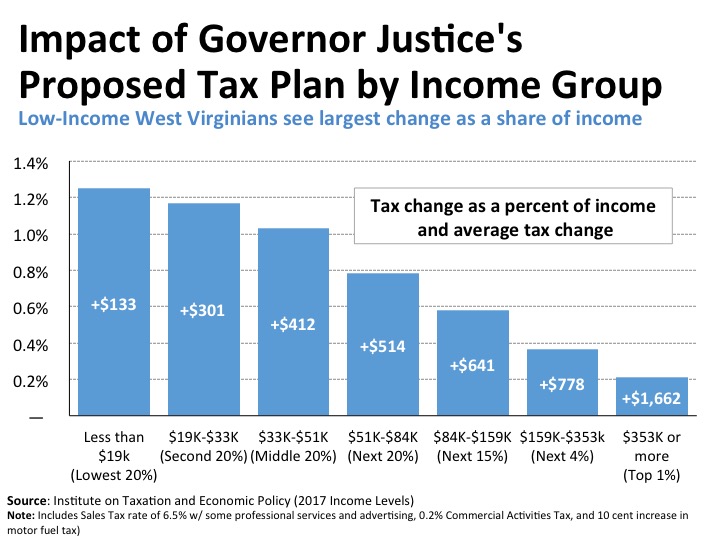 Until Governor Justice’s revenue plan is introduced, it will be difficult to measure exactly how it will impact working families in the state. That said, it is clear that it would fall hardest on low-income people in the state. There are number of options that exist to make his plan more balanced. This could include reinstating the business franchise tax and raising the corporate net income tax to their 2006 levels, increasing the severance tax on natural gas from 5 percent to 6.5 percent, enacting a three percent income tax surcharge on incomes above $200,000, and creating a refundable state Earned Income Tax Credit that is available in 26 other states. Lawmakers could also include expanding the sales tax base to include digital downloads and other personal services.

Though Justice’s tax plan is not perfect, it offers a real opportunity for lawmakers to include more progressive revenue enhancements that will ensure that state addresses its huge budget crisis while ensuring that it takes a balanced approach to tax increases that is more closely aligned with the ability to pay.