Yesterday, the House Health Committee passed out HB 2132 that imposes a statewide three-month time limit for SNAP food assistance for childless adults that are working fewer than 20 hours per week. This bill mirrors a similar provision found in SB 60 and HB 2741 that was discussed previously in this blog.

If enacted, these bills would bar the state from applying for a federal waiver to temporarily suspend the federal requirement that limits SNAP to three months out of every three years for childless, non-disabled adults unless they are working at least 80 hours per month, participating in a qualified job training program, or in workfare. States are allowed to apply for the waiver to suspend the time limit in areas of sustained high unemployment. While West Virginia used the waiver to suspend the time limit statewide in years past, Governor Tomblin ended the waiver in nine counties beginning January 1, 2016 that had low unemployment. These bills would suspend the waiver statewide indefinitely regardless of whether there is high unemployment or a major crisis such as a flood or natural disaster.

Though work requirements may sound good – especially in a state with historically low workforce participation – denying food assistance to unemployed and part-time workers will do little to encourage employment. It will, however, increase food insecurity for thousands of West Virginians, drain millions of federal dollars from our economy, and put additional strain on our food pantries, soup kitchens, and charities that are already stretched thin.

SNAP Time Limits Put the Poorest and Most Vulnerable at Risk

The population subject to the three-month time limit are childless adults who are unemployed or working below 20 hours a week. These individuals are extremely poor, most only have a high school degree, and many are veterans, homeless people, noncustodial parents, and people with a mental and physical limitation. Most childless adults on SNAP are also strongly tied to the workforce. According to a recent report from the Center on Budget and Policy Priorities:

In 2015, the Ohio Association of Foodbanks released a report that assessed about 5,000 childless adults on SNAP who were referred to a work experience program in Franklin County, Ohio. The report found that many low-income childless adults face multiple challenges to employment, including little access to transportation, criminal records, mental and physical limitations, frequent job dismissals, no drivers license, and homelessness. 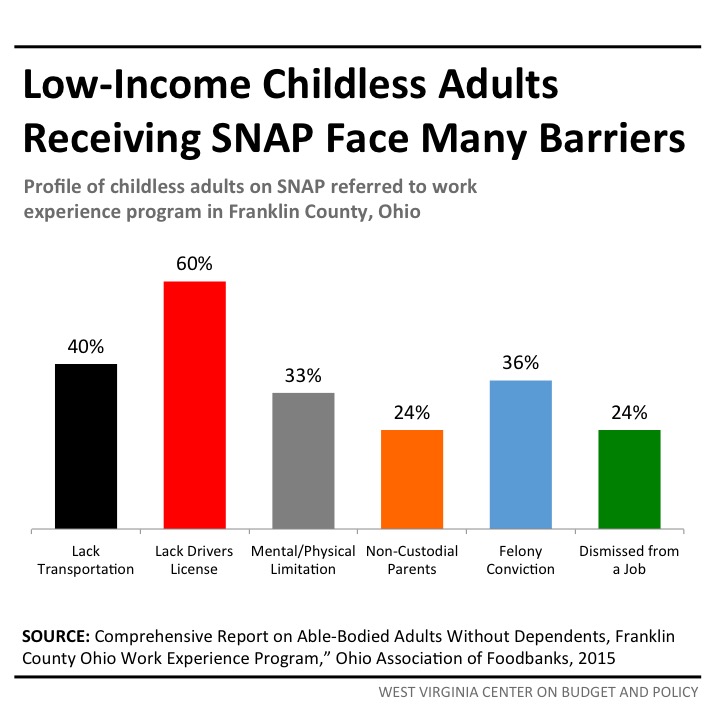 Because many childless adults on SNAP have these barriers to employment and independence, there are limited job or volunteer opportunities that match their abilities.

While most of the nation has recovered from the Great Recession, West Virginia has not. Most counties are still struggling with very high unemployment. Enacting a time limit to food assistance in areas of high unemployment and a lack of job opportunities when a temporary waiver of the time limit is available makes no sense. As discussed earlier, West Virginia has already ended the waiver in nine counties in West Virginia that had relatively low unemployment and higher population density (i.e. access to more jobs) and expanding it to distressed areas of the state will only makes things worse for low-income adults. Many of these areas have been hit particularly hard by the recent decline in coal production, such as Mingo County that has an unemployment rate of almost 10 percent. 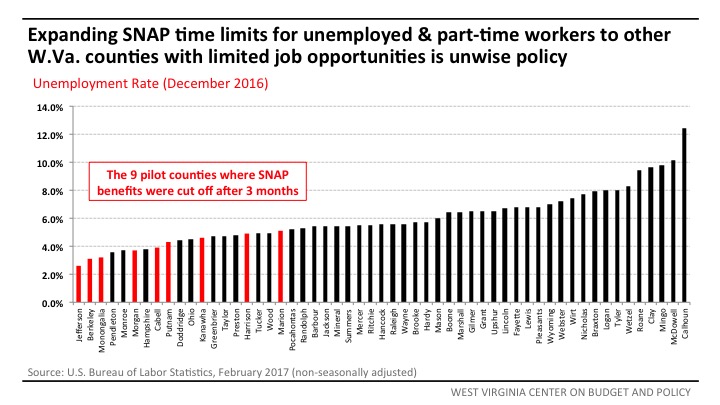 According to the Department of Health and Human Services (DHHR), there are 7,310 non-exempt childless adults  on SNAP in the other 46 counties in West Virginia that would be cut off of food assistance if the state is forced to implement a three month limit. DHHR has already cut 5,417 people off of SNAP in the nine pilot counties where the federal work requirement restriction was put into place on January 1, 2016.

Though it is unknown how many childless adults on SNAP found employment after being cut off, DHHR found that the program has not “had a significant impact on employment figures for the ABAWD population in the nine issuance-limited counties” and that they have not seen a “clear increase in the number of ABAWDs maintaining benefits sue to meeting the work requirements.” In fact, of the 13,984 state-wide referrals made to the SNAP Employment & Training Program in 2016, only 259 gained employment. Most likely, this means most people lost food assistance because they had barriers (see above) to meeting the work requirement.

While some proponents of imposing a three month time limit on SNAP highlight that it has been effective in raising employment, a careful analysis of the evidence suggests that imposing the time limit had little effect on work but did cause thousands of poor residents in Kansas to lose food assistance. The chart below looks at the number of childless non-disabled adults in SNAP before Kansas imposed its three-month time limit (Quarter 3, 2013) and a year after it was imposed (Quarter 1, 2015). Over 20,000 people stopped participating in SNAP after the Kansas benefit cutoff. The number of non-disabled childless adults on SNAP that were working also declined, from about 6,200 to 3,570. Though some have touted this as a success since the share of people working increased (from 21 percent to 42 percent), it really just reflects the number of caseload changes, not improved circumstances. 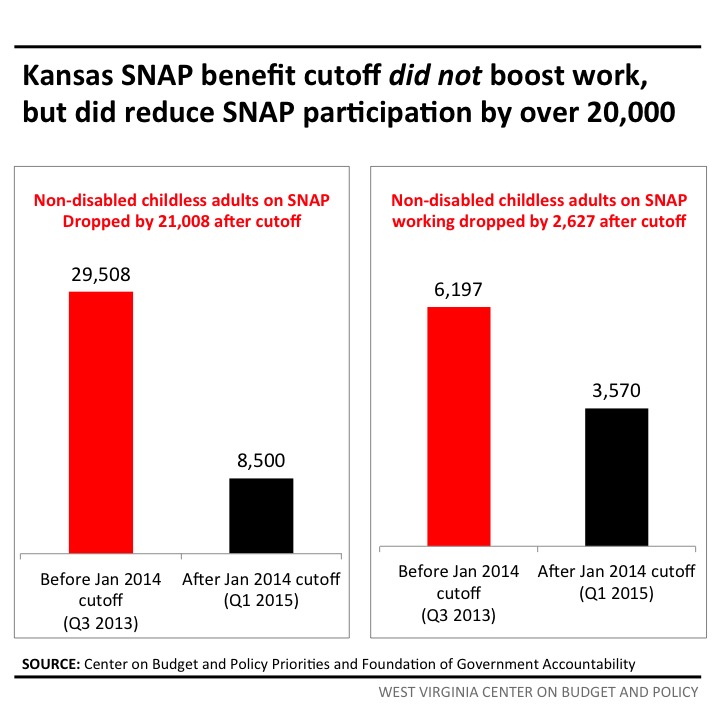 The much larger and important question is what happened to those that were cutoff of SNAP in Kansas. While we don’t know about what happened in Kansas, research in other states has found that most remain poor and that many do not find work and struggle with various other problems, including a lack of health insurance, adequate housing, and trouble paying monthly bills.

The loss of federal dollars from SNAP flowing into the state is significant. According to DHHR, the average monthly SNAP benefit is $203.20. This means the state lost approximately $15 million in federal SNAP benefits that would other wise be in the state’s economy in 2016. If the state is forced to impose the time limit on the other 46 counties, this would amount to $17.8 million in lost federal money for the state. This does not take into account that SNAP has a high economic multiplier, which will lower economic growth. For every $1 in new SNAP benefits, it results in an estimated $1.80 in total economic activity.  Imposing the time limit would also strain local nonprofits and private charities who will have to serve this population with food assistance and other supportive services.

Another major concern about the existing three month time limit in the nine pilot counties, and expanding to the other 46 counties, is that capacity of DHHR to work in rural areas to connect these individuals to jobs and training. As discussed above, this population faces several barriers to employment or volunteer work because of a lack of transportation and other challenges that are more acute in rural counties. DHHR estimates that it would cost over  $2 million  to extend the SNAP E&T program to these other counties, draining the state of resources when it faces a $500 million budget shortfall this year.

Instead of cutting thousands of more low-income people from food assistance by permanently tying the Governor’s hands from providing food assistance in areas that are struggling with job opportunities, the legislature should be exploring non-punitive ways to help connect more people to jobs and to ensure our most vulnerable residents have access to the services they need to achieve self-sufficiency.