Proposed Asset Limit for Food Assistance is Counterproductive and Expensive

The legislation contains three core provisions that aim to limit food assistance, including prohibiting low-income families with very modest resources from qualifying for SNAP; eliminating SNAP for unemployed and part-time workers after three months if they live in areas of high unemployment, even when they are looking for work; and giving a costly hand-out to private companies to set up duplicative verification systems. This post will focus on the first provision – creating a new asset limit or “asset test” for SNAP recipients, while the next posts will examine the other two provisions.

SB 60 and HB 2714  both require reinstating a federal “asset test” on how much a family can have in assets in order to be eligible for federal food assistance or SNAP. In 2002, the federal government made asset limits an option for states, allowing them to raise their asset limit or eliminate it entirely.

As of August 2016, 34 states – including West Virginia – and the District of Columbia have eliminated the “asset test” for SNAP. Five states have asset limits higher than the federal limit ($5,000 in Idaho, Maine, Michigan, and Texas and $25,000 in Nebraska), while 11 states retain the federal asset limit of $2,250 and $3,250 for households with an elderly or disabled member (See Map Below). Virginia is the only border state that adheres to the federal standard. 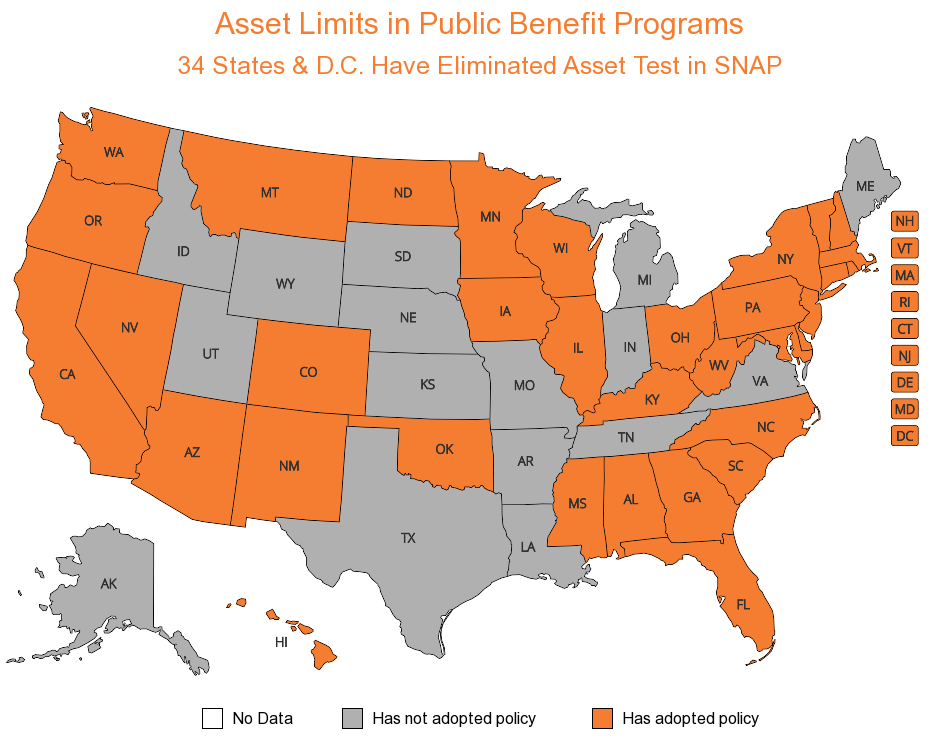 The reason most states have removed their asset test from SNAP is that they recognized that it was counter-productive and punishes families for saving money for emergencies or for their children’s future while they are temporarily enrolled in SNAP.  By removing the asset test or limit, it simplifies the application process, reduces errors associated with assets and vehicle information.

Studies have shown that asset limits reduce savings substantially due to the eligibility condition. A recent study (2016) by the Urban Institute found that states with relaxed asset limits (those not following the federal asset limits), “increase low-income households savings and participation in mainstream financial markets (i.e., having a bank account), and reduce the likelihood that households cycle on and off SNAP (referred to as churn).”  Having a bank account is important because it helps families save for emergencies,  conduct basic financial transactions, build credit history, and gain access to credit. Putting in place a restrictive and extremely low asset test will harm seniors and people with disabilities living on fixed incomes who have modest savings set aside for emergencies. Because SNAP works as a temporary stopgap – with 58 percent of new receipts leaving the program within a year – it is vital for them to retain their savings as they get back on their feet. Studies have also shown that asset limits (and more stringent vehicles asset tests) have no impact on the length of stay in SNAP.

A recent study conducted from the U.S. Department of Agriculture that explored the impact of asset limits on SNAP participation found that asset tests reduce eligibility by 3 percent (1.2 million households). The same study also found that if states reimposed the federal asset limit, 15.6 percent of SNAP eligible households would become ineligible.  This means that if West Virginia enacted the federal asset test the state would not only  increase food insecurity and economic hardship, it would also reduce the amount of SNAP dollars in West Virginia’s economy. Because SNAP has a high economic multiplier (every dollar in new SNAP benefits results in $1.80 in total economic activity) the reduction in benefits would likely reducing economic growth and employment.

States have also found that administering an asset test for SNAP can be costly and difficult, requiring additional resources and staff. Since low asset limits can increase the amount of churning in SNAP, this also increases administrative costs as people exit and then reenter SNAP. Most recently, Pennsylvania eliminated its SNAP asset test because they found that it cost the state $3.5 million a year to administer and resulted in $1.5 million in reduced SNAP benefits due to errors by caseworkers. Studies that have looked at the asset test in the Temporary Assistance for Needy Families (TANF) have also concluded that it can cost more to administer that it can potentially save.

While federal SNAP rules count the market value of most vehicles above a dollar threshold ($4,850) toward the asset limits, West Virginia, like 39 states, excludes the value of all vehicles while 11 states exclude at least one vehicle. SB 60 and HB 2714 would only allow for the exclusion of one vehicle, which can force families to sell a car and be left with fewer assets down the road.

West Virginia should not reinstate its asset limit for SNAP.  It would not only increase economic hardship and food insecurity among vulnerable populations, it would raise state administrative burdens and costs, and hurt our state’s economy by reducing federal SNAP benefits that flow into our state’s rural economy.