Aside from General Revenue appropriations for Medicaid, nearly every other area of the budget is cut compared to FY 2017. Executive Branch agencies are cut by $2.7 million, the Department of Commerce is cut by $4.1 million, the State Department of Education is cut by $12.9 million, Education and the Arts is cut by $2.4 million, DHHR other than Medicaid is cut by $7.7 million, and Higher Education is cut by a total of $19 million. The only areas of the budget to see a significant increase over FY 2017 are payments to the Teacher’s Retirement System Unfunded Liability (+$23.3 million) and the WV State Police (+$7.1 million). The table below details all of the changes from FY 2017 to FY 2018. 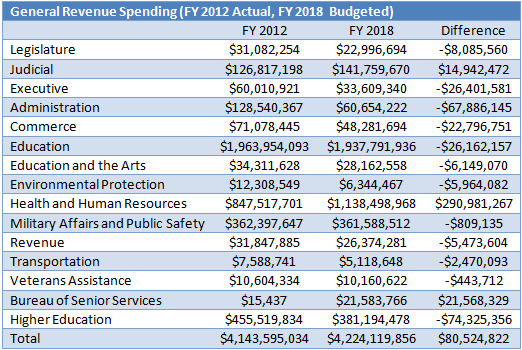