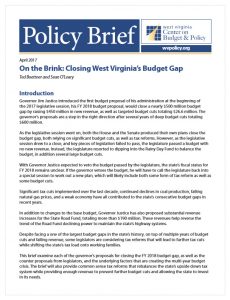 The legislature passed a budget with major cuts to education and health care, no new revenue, and, again, dipped into the state’s Rainy Day Fund to balance the budget. With Governor Justice expected to veto the budget passed by the legislature, the state’s fiscal status remains unclear. Significant tax cuts implemented over the last decade, continued declines in coal production, falling natural gas prices, and a weak economy have all contributed to the state’s consecutive budget gaps in recent years.