A bill making its way through the West Virginia Senate would create a three-county pilot program to drug test recipients of cash assistance.

At its current projected costs, the drug testing program would cost over $600 per cash assistance recipient. To put that amount into perspective, the maximum monthly benefit amount for a family of three in West Virginia is only $340.

Read more about this costly proposal and the lackluster results it has had in other states in Sean’s blog post.

Yesterday, the Senate passed its version of the prevailing wage bill. Arguably one of the most talked about pieces of legislation this session, the bill’s opponents were able to get it amended prior to passage. Construction projects costing less than $500,000 would be exempted from having to pay the prevailing wage. In addition, the responsibility of calculating the prevailing wage would be moved to Work Force West Virginia from the Department of Labor.

Growth in Economy Not Making it to People’s Wallets

While West Virginia’s economy is recovering from the Great Recession, its residents continue to struggle with stagnant wages. In fact, from 2008 to 2013, the median household income in West Virginia declined even as the economy grew: 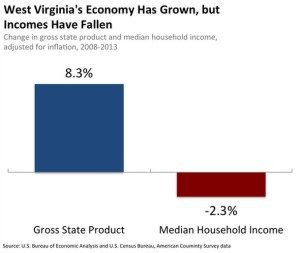 The deadline to sign up for health insurance under the Affordable Care Act is just two days way on February 15. When the final numbers are in, it is expected that 35,000 West Virginians will have enrolled this year. Read more from the Charleston Gazette.

An Undoing Racism Workshop will be held April 8-10, 2015 at the Pope John XXIII Pastoral Center, 100 Hodges Road, Charleston, WV. It is sponsored by American Friends Service Committee and led by: the People’s Institute for Survival and Beyond.

Workshop Description: The People’s Institute for Survival and Beyond focuses on understanding what racism is, where it comes from, how it functions, why it persists and how it can be undone. Our workshops utilize a systemic approach that emphasizes learning from history, developing leadership, maintaining accountability to communities, creating networks, undoing internalized racial oppression and understanding the role of organizational gate keeping as a mechanism for perpetuating racism.

Workshop registration information is available here. Applications are due February 27.

February 15 is the deadline for the discounted registration fee for this year’s Try This conference. Register here.

Be there for two idea-packed, inspiring days with like-minded people from all over the state. Trade ideas, join forces. Get inspired, learn, plan your next steps.
40 workshops packed with healthy community ideas and strategies.