Blog Posts > A Marriage Not Made in Heaven: A State EITC Without an Income Tax
February 28, 2017

A Marriage Not Made in Heaven: A State EITC Without an Income Tax

Last Friday, the Senate Select Committee on Tax Reform explored the idea of amending SB 335 to include a version of a refundable state Earned Income Tax Credit. As noted previously, SB 335 would replace the personal and corporate income tax, along with the sales and use tax, with a general consumption tax of 8 percent. One major problem with this idea is that if West Virginia ceases to have an income tax , how could it create an WV EITC that is based on someones state income tax liability (see here for how a WV EITC would work)? How big would a WV EITC have to be to offset the increased tax liabilities for low-income West Virginians if SB 335 is enacted?

Let’s look at the first question. Washington State is the only state in the country that does not have a state income tax that currently has a refundable state tax credit based on the federal EITC (10%) called the Working Families Tax Exemption (WFTE). While the WFTE was enacted in 2008, it has never been activated or funded because of ongoing budget problems. Another major problem with the WFTE is that it has very high administrative costs because the state does not have an income tax ($4.4 million) which complicates the application process. So, while it is possible to have a refundable state EITC without an state income tax, it is not a marriage made in heaven. 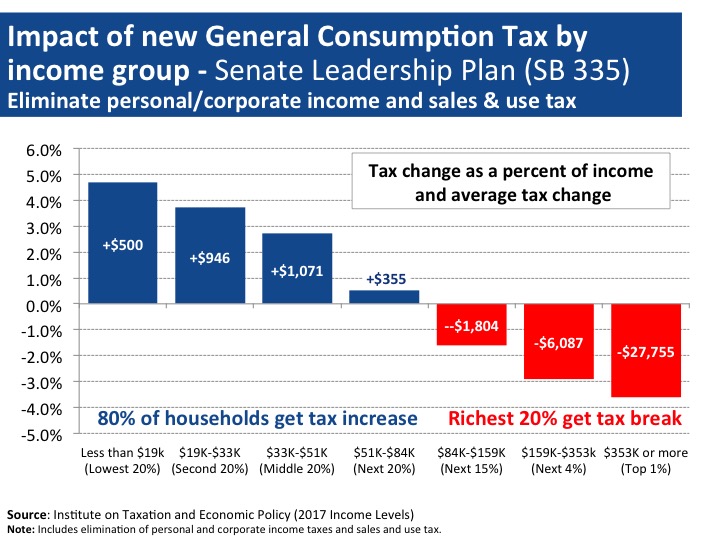 For example, in 2014, the average EITC credit was $2,241 in West Virginia. At 115 percent of the federal credit, the average state EITC would be $2,577 in West Virginia. If this person is in the second 20 percent, this means that may see a net tax decrease of over $1,600 on average ($2,577-$946= $1,631). The central reason for the discrepancy is only a portion of those in the bottom 40 percent of taxpayers receive benefits from the EITC, as mentioned above. In 2014, approximately 161,000 tax filers in West Virginia received the federal EITC while 513,000 tax filers had income within the EITC income limits that did not receive a EITC.  In other words, EITC recipients only make up about one-third of tax filers below $50,000 (EITC max income range), not including those with low incomes that didn’t file taxes at all. If you only use a refundable state EITC to offset the total tax increase ($412 million for bottom 40 percent as a whole), people that are eligible for the EITC will likely receive a tax cut while others that receive little to nothing from the EITC will continue to see a large tax increase. This was a major point of confusion at the committee meeting, but I hope this helps clarify why a WV EITC would only offset the tax hikes for those that are eligible for an EITC.

Of course, none of this analysis takes away from the fact that this bill would offer huge tax cuts for the wealthy and that to make low-income West Virginians hole would require a large drop in the amount of revenue that the new consumption tax brings to the budget. This would likly mean large budget cuts, which takes us in the opposite direction we want to go when we are facing a $500 million budget gap this year.