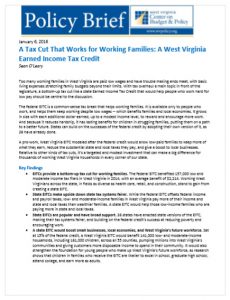 Too many working families in West Virginia are paid low wages and have trouble making ends meet, with basic living expenses stretching family budgets beyond their limits. With tax overhaul a main topic in front of the legislature, a bottom-up tax cut like a state Earned Income Tax Credit that would help people who work hard for low pay should be central to the discussion. Read PDF of report.

The federal EITC is a common-sense tax break that helps working families. It is available only to people who work, and helps them keep working despite low wages — which benefits families and local economies. It grows in size with each additional dollar earned, up to a modest income level, to reward and encourage more work. And because it reduces hardship, it has lasting benefits for children in struggling families, putting them on a path to a better future. States can build on the successes of the federal credit by adopting their own version of it, as 26 have already done.

A pro-work, West Virginia EITC modeled after the federal credit would allow low-paid families to keep more of what they earn, reduce the substantial state and local taxes they pay, and give a boost to local businesses. Relative to other kinds of tax cuts, it’s a targeted and modest investment that can make a big difference for thousands of working West Virginia households in every corner of our state.