Young Children in West Virginia are Uninsured at Pre-ACA Rates 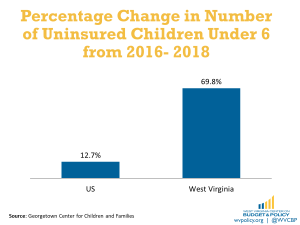 We’ve talked before about rising uninsured rates among West Virginia adults, and it seems that the same issues are also driving an alarming increase in young children in our state becoming uninsured. This is not surprising, as the Affordable Care Act has a well-documented “welcome mat” effect, where kids are more likely to be enrolled into health programs when their parents are also eligible. A Health Affairs study found that over 700,000 children across the country gained health coverage when their parents became eligible in states that expanded Medicaid. Conversely, we can infer that when parents are no longer covered by Medicaid, their kids are less likely to keep their coverage.

Between 2016 and 2018, when uninsured rates among West Virginia children and adults increased, several political and policy changes occurred.

-Funding for programs that help people enroll in Medicaid and Affordable Care Act plans was slashed by 83 percent.

-The 2017 Tax Cuts and Jobs Act reduced the individual mandate, or penalty for going without health insurance, to zero dollars.

-Federal efforts to repeal the Affordable Care Act in 2017 likely led to confusion about the law’s status.

-Changes in eligibility for other safety net programs like the Supplemental Nutrition Assistance Program (SNAP) and Temporary Aid to Needy Families (TANF) may have led residents to believe they were no longer eligible for any public assistance.

It has become increasingly clear that when parents face barriers or confusion in obtaining health coverage, children are more likely to be uninsured. We should do everything possible to reverse the backsliding in children’s health coverage that has placed us back at pre-ACA uninsured rates. West Virginia policymakers should focus on expanding access to health care for the entire family, because it’s good policy and it will help kids.