West Virginia experienced historic gains in the number of residents insured when the Affordable Care Act and Medicaid expansion were implemented. In fact, West Virginia arguably benefited more than any other state from the provisions of the Affordable Care Act. In 2013, prior to implementation, the state’s uninsured rate was 14 percent. By 2016, it was down to 5.3 percent.

As the uninsured rate increased in 2017, so did poverty- West Virginia was one of only two states in the nation to see an increase in poverty in 2017.  And the job growth that has occurred in the state over the past year is largely attributable to temporary pipeline construction, not long-term jobs for West Virginians. 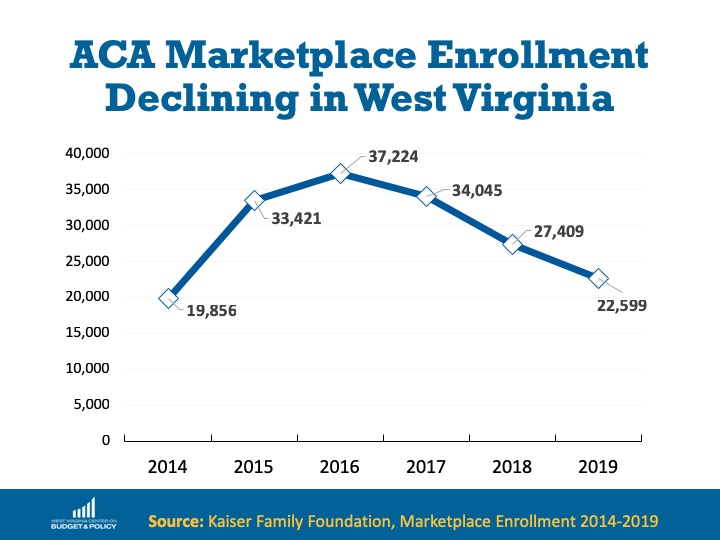 So why are more West Virginians uninsured now despite the persistence of the landmark health care law and the Medicaid expansion?

Paperwork Barriers A new report by Families USA looks at churn rates on Medicaid due to bureaucratic barriers and complex redetermination processes. Over 17,000 West Virginians lost Medicaid coverage in 2018 due to paperwork barriers, which often cause people who do qualify for Medicaid to lose coverage when they are unable to jump through the hoops placed in their way. There is strong evidence that state policy decisions to enact punitive coverage redetermination processes are driving these coverage losses.

Additional barriers that should be considered are the chilling effects of drug testing and the challenges of complying with work requirements in other safety net programs. SNAP has work requirements in many counties and TANF benefits for very low-income individuals require drug testing. Though Medicaid eligibility is not contingent on either drug testing or work reporting requirements, would-be applicants may not know that due to the unified application process.

West Virginia’s Decision Not to Silver-load In 2017, the Trump Administration cut off payments to insurers that were called cost-sharing reductions (CSRs). These payments helped cover the deductibles and out-of-pocket costs for low-income folks who purchased coverage on the ACA’s Marketplaces to ensure that plans remained affordable relative to their incomes.

In response, insurers made up their losses by pricing the cost of the CSRs into insurance premiums. Since cost-sharing reductions are only available on silver plans, one of three categories of plans available in each state, many states made the decision to instruct insurers to only price the cost of CSRs onto silver plans. This approach, called “silver-loading”, makes coverage much more affordable for individuals purchasing plans on the marketplace. That is because the subsidy that an individual receives to help pay for their plan is based on the cost of a benchmark silver-level plan, but the subsidy can be used to purchase any plan- bronze, silver, or gold. The subsidy increase caused by silver-loading makes bronze and gold plans significantly cheaper not only for consumers who would have qualified for cost-sharing reductions, but for all consumers who qualified for premium tax credits.

At least 43 states have adopted a silver-loading approach, which has increased the financial help available to people who purchase coverage on the Marketplace. West Virginia did not adopt this approach and instead distributed the cost-sharing reductions across all plans (bronze, silver, and gold). This made premium subsidies in West Virginia smaller than they otherwise could have been, and unsubsidized customers (those with incomes too high to qualify for subsidies) also faced higher premiums because of CSR-related adjustments regardless of which level of coverage they would have selected.

Many states who utilized silver-loading saw enrollment increases rather than declines, likely due to the availability of more affordable plans.

Confusion About the Law’s Status Federal efforts to repeal the Affordable Care Act in 2017 may have led to confusion about whether the Affordable Care Act was still in place. An Urban Institute study found that the tone of news coverage in a state played a role in enrollment numbers. In states that saw enrollment increases in 2018, elected officials spoke positively of the ACA amid repeal attempts and made sure that their constituents were aware of the availability of health coverage.

Advertising was also key in states that saw enrollment increases. The Trump Administration slashed the open enrollment advertising budget by 90 percent, which also could have contributed to a lack of awareness about the law’s status. Advertising often continued in states that run their own exchanges, and insurers often placed advertisements in states with two or more insurers competing statewide, which also helped awareness. West Virginia has two insurers, but only one offers statewide plans, and we do not run our own marketplace exchange.

Less in-person assistance During the first four years of the Affordable Care Act’s implementation, the federal government allotted funding for in-person enrollment assistance covering the entire state. That funding was cut by 83 percent in 2018. In-person assisters specialized in helping West Virginians who would otherwise have difficulty navigating the health care enrollment system due to internet access barriers, low-health literacy, language barriers, and other difficulties. These populations may have had difficulty enrolling when in-person assistance was no longer available statewide.

Mandate Repeal With the passage of the 2017 Tax Law, the individual mandate, or penalty for going without health coverage, was reduced to zero. Though it was never considered to be a strong incentive for people to sign up for health coverage who may not otherwise want it, the removal of the tax penalty may have caused some to give up their health coverage.

Sabotage, barriers, and confusion have all contributed to making a very complex health care system even more difficult for West Virginians to navigate. The Medicaid expansion and Affordable Care Act have brought vast economic and health benefits to our state. Policymakers at the state and federal levels should build on the gains of the Affordable Care Act and Medicaid by extending Medicaid to post-partum women, expanding Medicaid to include dental coverage, increasing prescription drug price transparency, and considering a Medicaid buy-in rather than enacting barriers and tearing them down.