Over the last several years, West Virginia has reduced its two main business taxes on the promise that it will boost revenue and jobs. As recent budget cuts show, there is little evidence that cuts to the corporate net income and business franchise tax have “broadened the base” or led to significant job gains.

In fact, as the chart below highlights, business tax revenue was lower in FY 2013 (July 2012-June 2013) than it was fourteen years earlier in FY 1999.  While these two business taxes made up 12.7 percent of the general revenue fund in 1990, today they only account for 5.7 percent. Furthermore, this trend is expected to continue in the years ahead as the business franchise tax is eliminated and the corporate net income tax rate drops to 6.5 percent by 2016. 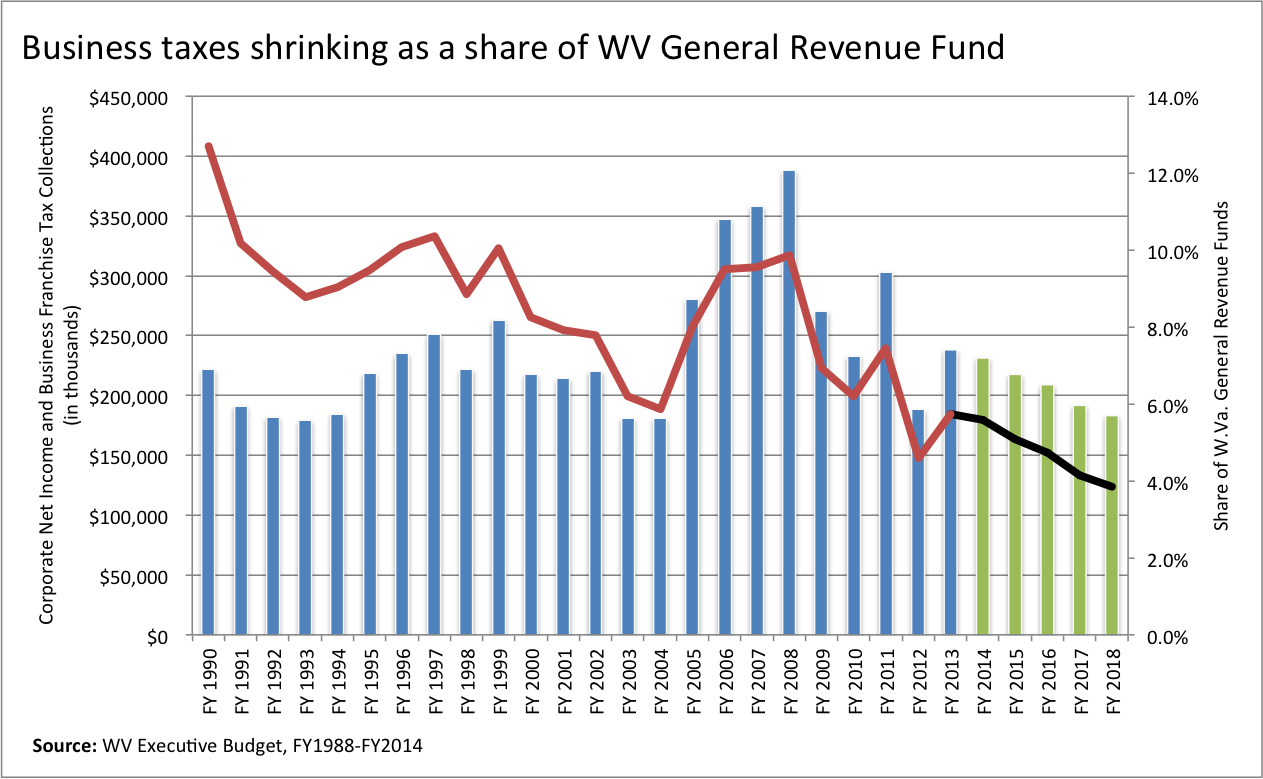 The larger reason for why these business tax cuts will do little to boost investment or jobs is that they are a small cost of doing business compared to other interstate differences, such as labor, energy, transportation, occupancy, and other costs of production.

Based on the above estimates, the corporate net income and business franchise tax made up just 0.2 percent of the cost of doing business in West Virginia.* You would be hard pressed to make the case that reducing this amount from 0.2 to 0.1 percent would significantly impact economic growth. A much better case can be made that the real goal of reducing these two business taxes has to do with good ole fashion rent-seeking (aka lobbying) not economic evidence or theory.

To help further illustrate this point,  let’s look at the effective tax rate of these two business taxes on the coal industry. According to the WV Department of Revenue, the total production value of coal sold in West Virginia was $9.5 billion in 2010 and the total corporate net income and business franchise taxes paid by the coal industry was $32.9 million. This is an effective tax rate of just 0.35 percent. To put this in perspective, the coal industry paid $1.6 billion in wages in 2010 or 17.2 percent of its production value.

Since cutting these two corporate taxes only reduces business costs by a very tiny amount, it is clear that business location and investment decisions hinge on factors other than taxes and that cutting business taxes are an inefficient way to boost economic growth and job creation. This is especially true when you look at who likely benefits from corporate tax cuts and what sacrifices have to be made in order to balance the budget with less revenue.

For example, most scholars maintain that corporate taxes largely fall on capital or shareholders and that the benefits of corporate tax reductions mostly go to high-income taxpayers and those living out of the state. Since most large businesses in the state that pay the lion’s share of corporate net income and business franchise taxes are headquartered out-of-state and whose shareholders live mostly out-of-state, this means most of the tax savings – $82.3 million in 2013 – flows outside of the state’s borders. Meanwhile, when the state has to cut higher education funding and raise tuition for in-state students because of these tax cuts the result is a tax increase on the state’s college students and parents.

While it is very important for our state to be a place where businesses can thrive and prosper, slightly reducing business costs is not going to make this happen. By investing in the important public structures that provide a foundation for economic growth and a better quality of life, we are much more likely to get a better bang for our buck and make the state a better place to live, work, and raise a family.

*These figures assume that the total cost of corporate business expenses in West Virginia was $140 billion based on dividing this amount by 2.5% using the COST estimates of $3.5 billion in total state and local taxes paid in 2010 ($3.6 billion/2.5% = $140 billion). The $140 billion estimate equates to being 0.56% of the total ($25 trillion) U.S. business expenses in 2010. This estimate is reasonable given that in 2010 West Virginia’s private sector GDP ($51.5 billion) comprised 0.41% of U.S. GDP ($12.5 trillion).  For a more in-depth understanding of using the above IRS & COST data see footnote #4 of this paper. Also for a more exhaustive understanding of the relationship of state and local business taxes on econmic growth, see Dr. Peter Fisher’s paper “Corporate Tax and State Economic Growth.”