Who Owns West Virginia in the 21st Century? 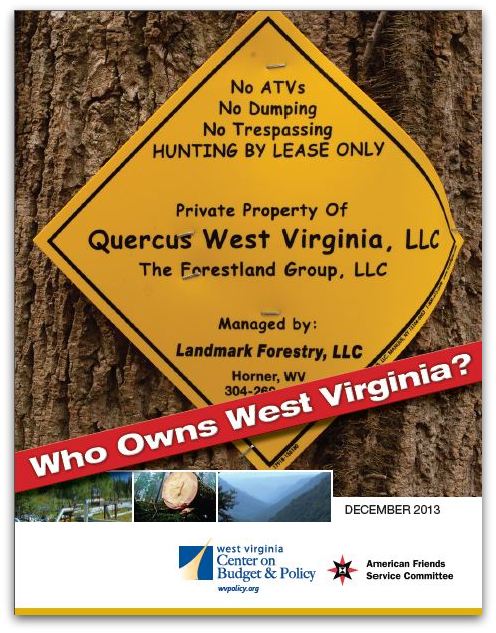 For the better part of the 20th century, land ownership patterns in West Virginia remained virtually unchanged. Large energy and land-holding corporations bought up mineral-rich acres and held them until market conditions were favorable for mining, drilling or leasing. Two separate investigations – one by reporter Tom Miller in 1974 and another by the Appalachian Land Ownership Task Force later that decade – found that vast acres, especially those in the southern coalfields, were controlled by a handful of mostly absentee corporations. Read PDF of report. Read Executive Summary.

While much of the state’s private land is still owned by large, mainly absentee corporations, the list of top owners – once dominated by energy, land holding and paper companies – now includes major timber management concerns, which are in essence money-managers for investors. The North Carolina-based Heartwood Forestland Fund, a timberland investment company that owns 500,366 acres in 31 counties, is West Virginia’s largest landowner.

Although the purchase of West Virginia’s land by timber management companies is perhaps the most interesting finding by investigators for this report, researchers also found:

This study has only scratched the surface of analyzing and understanding land ownership patterns in West Virginia.

While this report has identified changes in overall patterns of land ownership, there are undoubtedly many other comparisons that can be made by examining the 1974 Miller study, the 1981 Appalachian Land Ownership Task Force study and the present data.

Furthermore, a more detailed analysis of land ownership by county might reveal the role that absentee and local land ownership, as well as highly concentrated and widely distributed land ownership, has played in the county’s economic development over time.