Blog Posts > What Would Eliminating the Income Tax Mean for West Virginia?
February 17, 2017

What Would Eliminating the Income Tax Mean for West Virginia? 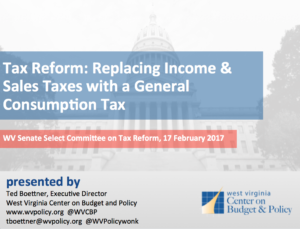 Eliminating the income tax is a strategy that has been tried over and over in other states with little or nothing to show, other than revenue erosion that brings cuts in support for schools, transportation and other true building blocks of broad prosperity. A better course for West Virginia would be to reform the tax system in ways that would close our looming budget gap, tie what people owe more closely to their ability to pay, and help more hardworking men and women provide their families with a secure future

State Senate leadership and Governor Justice said their goal is to eliminate the income tax altogether. Income tax cuts and proposals in other states have involved significant increases in other taxes – those that affect low- and middle-class households more than the wealthy – and major cuts to essential services.

On Friday, February 17, WVCBP Executive Director Ted Boettner presented at the Senate Select Committee at the Capitol on how a shift from income and sales tax to a general consumption tax would benefit the wealthy and destabilize the state’s revenue system. View his presentation here.