What Does the Election Mean for State Economic Policy in West Virginia?

Last week, to many people’s surprise, West Virginia’s legislature flipped from blue to red with the GOP picking up 18 seats in the House of Delegates and eight seats in the State Senate. It appears that Mercer County State Senator and car dealership owner Bill Cole will become the new Senate President and that current minority leader and lawyer Tim Armstead from Kanawha County will become the new Speaker of the House of Delegates.

So far, it is unclear who will take leadership positions in the House. (If I had to guess, I would say Patrick Lane would be appointed chair of the  judiciary committee and either Eric Nelson or Ron Walters could chair the finance committee. Perhaps Daryl Cowles will be majority leader.)

As the graphs below illustrate, the shift from blue to red has been in the making for some time, especially over the last several years. Nonetheless, the drastic change in party composition was nothing less than a seismic shift that has left some feeling ‘shell-shocked.’ The shift in party composition also means a shift in the state’s political balance of power, with a Democratic governor and a Republican-controlled legislature. 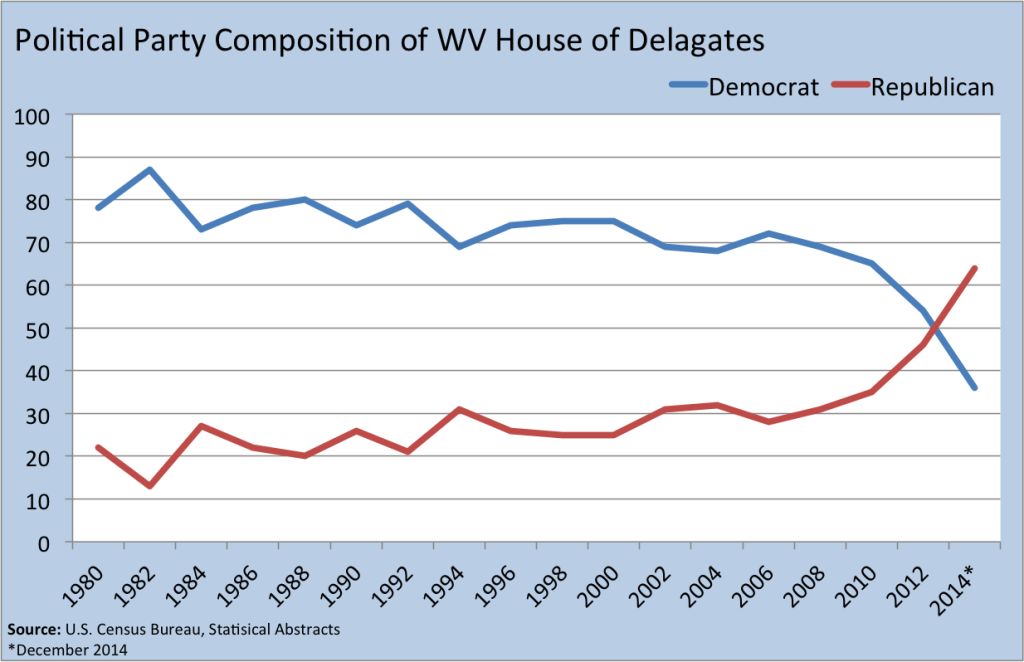 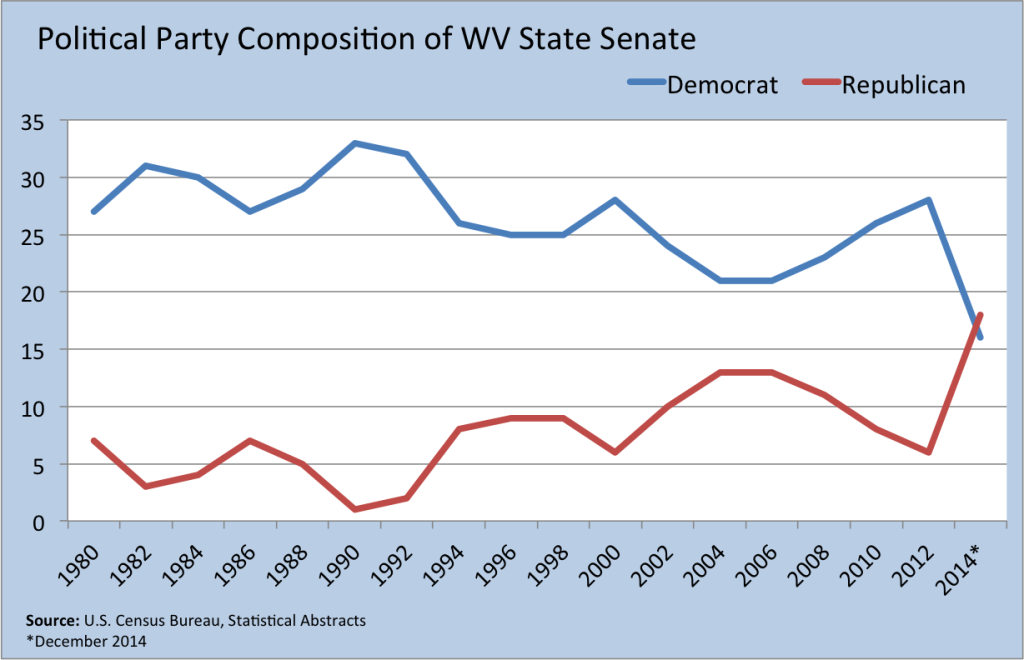 Before we get to the policy proposals we are likely to see in 2015, it’s important to look at the state’s procedural rules that could have a dramatic impact on policy outcomes. While the budget bill (or supplementary appropriations bills) requires two-thirds of each house to override a governor’s veto in West Virginia, it only takes a simple majority to override the governor’s veto of other bills (West Virginia is one of only six states that only requires a majority). Upon passage of a bill, the governor only has five days to veto it during the session (15 after the session ends). This means there could be a lot of bills passed early in the session if the legislature wants to ensure that they become law.

With that being said, what kind of economic policies should we expect during the 2015 Legislative Session? How will the new leadership impact the state budget next year and beyond? While it is impossible to know what the future holds – as Yogi Berra once said it is hard to make predictions, especially about the future – we can look at the policy priorities of the current leadership  prior to Tuesday’s election. (You can also look to Russ Sobel’s Unleashing Capitalism, which the GOP called its “party platform” for policy change in West Virginia in 2007.)

Let’s start with a few:

Right-to-Work: This has been a policy priority for the Charleston Daily Mail and several GOP members of the House introduced right-to-work legislation in 2013, including Ron Walters and John McCuskey. It was also included in  the WV GOP party platform in 2012. Tim Armstead also serves on the National Right-to-Work Committee and has been very vocal in his support of the policy. As we’ve stressed, this law would give workers less freedom, depress their wages, erode pensions, and have no real impact on job growth.

Prevailing Wage: In 2014, Senator Cole was the lead sponsor (along with five other GOP senators) of a bill to repeal the state’s prevailing wage provisions for state construction projects. This bill was also introduced in the House by GOP members. Similar to Right-to-Work laws, eliminating prevailing wages for construction workers lead to lower wages, health and pension coverage. They also lead to a less-trained workforce and higher injury rates.

Repeal of Business Personal Property Tax: While eliminating the business personal property tax has enjoyed bi-partisan support in the legislature, it has been a difficult thing to do because it would leave the state with close to $500 million in lost revenue at the local level (not to mention the millions in additional money that would be needed for state aid to schools) and it would likely result in a giant tax shift to home owners if any of the revenue is replaced.

Another stumbling block is that it would require amending our state constitution. This would require two-thirds of the elected members in both houses in order for it to be placed on the ballot. Another avenue that could be taken by the GOP would be to make all business personal property subject to be taxed on its salvage value, which would lower the appraised value from 100% to just 5%. This is precisely what the legislature did a couple of years ago in efforts to attract an ethane cracker facility. Also, keep in mind that governors across the country are putting in large tax cuts without replacing the revenue. For more info, see our 2011 report on why eliminating the business property tax is fiscally irresponsible and a boon to mostly out-of-state mining companies.

End of Medicaid Expansion: While the Senator Hall has said that the WV State Senate may not eliminate Medicaid expansion to over 150,000 low-income West Virginians, he believes the House could move to eliminate it in 2015. It is also unclear whether Governor Tomblin would veto a bill eliminating Medicaid expansion if  does not include an appropriation.

More Budget Cuts?: Currently, the state has a deficit of $37.5 million in FY 2015. In January 2014, the governor projected a deficit of $126.3 million for the FY 2016 budget. In his veto letter in March 2014, he stated he would use the Rainy Day Fund to plug the FY 2016 budget hole which might grow even bigger with time. Last year, most of the GOP leadership argued against taking money from the rainy day fund and did not push for any tax increases to balance the budget. So, don’t be surprised if the new leadership pushes for more cuts in the FY 2016 budget along with other tax cuts that could lead to more future budget cuts. Another important thing to keep in mind is that the Governor’s veto authority over the budget only extends to reducing line-items not increasing them. For example, if the the legislature decides to make across the board budget cuts instead of tapping the rainy day fund next year, there is little that the Governor can do except veto the entire budget bill and call the legislature back into the session- which would be highly unlikely.

Budget Transparency: One of the more progressive measures that GOP leadership has taken is looking at ways to increase transparency in the budget process. This is something that we’ve worked on for some time and that might have a much better chance to be realized because of the change in the political balance of power.

Other fiscal policies that might come up in the 2015 Legislative Session could be school vouchers, a Tax Payer’s Bill of Rights (TABOR), and more corporate tax cuts, While these are all just a sample of what might come to pass, there is also a good chance that the new leadership will work to find common ground and that our budget process might be more open and more subject to public scrutiny. Let’s hope for the best!