On Friday, the Bureau of Labor Statistics (BLS) released its employment and unemployment survey for July 2015 and the news for West Virginia’s economy continues to be bad. West Virginia not only has the highest unemployment rate in the nation at 7.5 percent, it is also the only state to have lost a statistically significant number of jobs since July of last year.

West Virginia’s economy has performed particularly poorly over the last six months. Between January and July of 2015, West Virginia has lost 22,500 jobs or about 2.9 percent of its job base, after adjusting for seasonal patterns.

While there have been recent news stories about local government layoffs due to the decline in the local share of coal severance taxes, we need to wait a few months to see if the data jump back up now that school is back in session.

Outside of local government, the sectors that have suffered the worst job losses are construction and mining. Over the last six months, the state has lost 4,000 construction and 3,400 mining jobs, largely due to the sharp drop in energy prices, especially natural gas, and the continuing decline of West Virginia coal production. Other sectors that lost a lot of jobs over the last six months include finance and insurance (-1,200), professional business services (-900), and leisure  and hospitality (-800).

Since the beginning of the Great Recession in December 2007, West Virginia has had the third-worst job growth in the nation at -2.6 percent, behind only New Mexico and Alabama. Outside of Ohio, each of our neighboring states has more jobs today than before the Great Recession. West Virginia had 19,700 fewer jobs in July 2015 than in December 2007.

Back to the Future?

Moving from the establishment survey, which counts the number of jobs by industry, to the household survey that looks at unemployment, West Virginia’s doesn’t look any healthier than it did in 1980. The number of West Virginians employed and the size of the labor force is roughly what it was nearly 35 years ago. Similar to 1980, there are about 785,000 people in the state’s labor force and between 720,000 and 725,000 people employed. 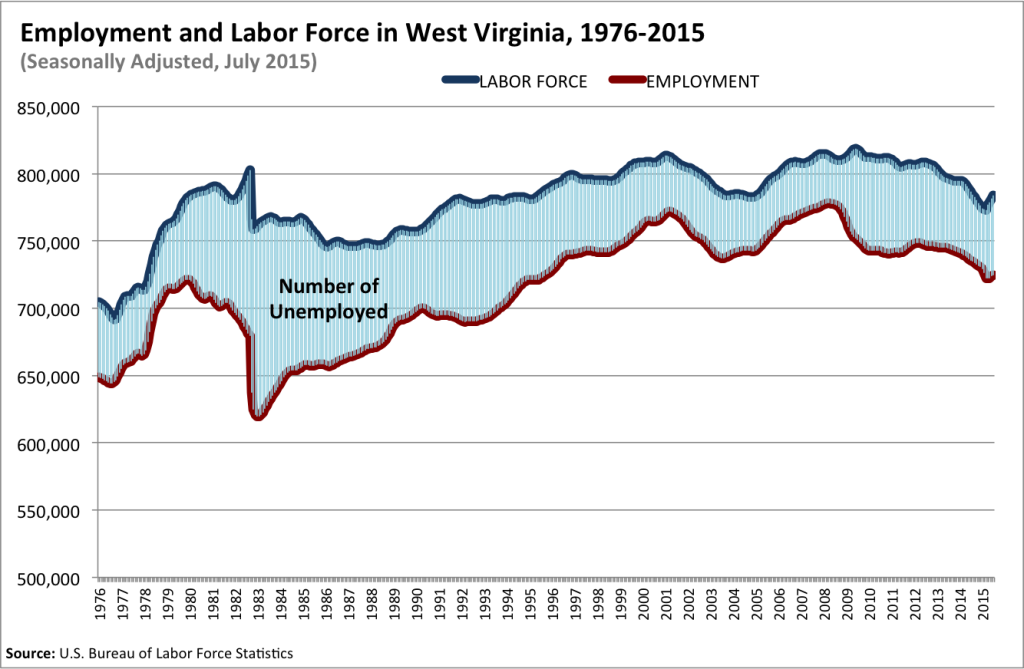 Time to Power Up

While an aging population and lack of population growth appear to be large factors negatively affecting employment, the state’s energy sector is being hit hard by low prices, competition, and public demand for clean energy. One way West Virginia policymakers could boost the state’s economy would  be to push hard for the White House’s POWER Plus Plan that includes over $5 billion in funding to coal states to help them diversify their economies and help coal miners retrain and retool. Letting politics and ideology get in the way of this investment would not only be a disservice to working families, but will ensure that our coalfield communities continue to decline and deteriorate.