It has been over seven years since the beginning of the Great Recession. While the country is finally beginning to recover from the biggest recession since the Great Depression, West Virginia’s rocky recovery has yet to fully materialize. In fact, over the last couple of years the state’s job growth has been non-existent. At the same time, the state is also seeing its population decline faster than any other state.

According to the U.S. Bureau of Labor Statistics, the number of jobs in West Virginia was lower in 2014 than it was 2008 in each of its four major employment surveys. This includes the household survey (Local Area Unemployment Statistics – LAUS), establishment survey (Current Employment Statistics- CES), occupation survey (Occupational Employment Survey- OES), and the survey of covered employees (Quarterly Census of Employment and Wages – QCEW). While of these surveys have a different definition of “employed”, none of them shows positive job growth over this period.

Three other surveys of employment also show no job gains since 2008. The annual American Community Survey and County Business Patterns survey both show declines in employment, while the Bureau of Economic Analysis also indicates that jobs have declined in West Virginia.

If we take a look at just the establishment survey – which includes residents and non-residents employed at West Virginia businesses – the jobs picture is better but relatively poor compared to other states. Between the start of the Great Recession in December 2007 and February 2015, West Virginia only gained 400 jobs or 0.05 percent job growth. The United States, on the other hand, has experienced job growth of two percent over this period, adding 2.8 million jobs. While the establishment survey shows some spikes in job growth over the economic recovery in the spring of 2012 and 2014, employment seems to be on the downward trend. The state’s biggest job losses since the beginning of the recession have been in manufacturing (-9,800), construction (-5,900), and retail trade (-3,500), 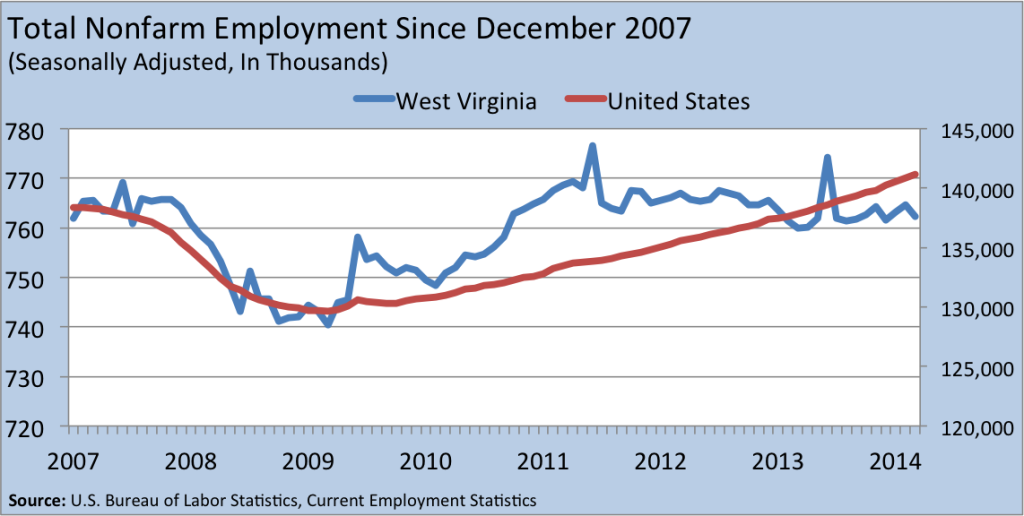 There could be a number of reasons for the state’s weak job performance over the last couple of years. The shrinking of the state’s working age population, the growing reliance on a boom and bust natural resource-based economy, crumbing infrastructure and lack of broad-band connectivity, disinvestment in higher education or our state’s continuing disregard for social inclusion and environmental standards that improve the quality of life in the state.

While it is difficult to discern what is at the root of West Virginia’s recent economic woes, it’s clear that the “shale-boom” has yet to provide the state with a manufacturing renaissance or any significant job growth. The state has also not reaped any noticeable rewards for the hundreds of millions in corporate tax cuts since 2007 or the budget austerity that has weakened our ability to invest in our people and communities.

Instead of pursing trickle-down economics and a race to the bottom on environmental rules that keep us safe and promote our well being, our state needs to pursue policies that grow our economy from the middle-out and that make our state a better place to live, work, and raise a family.