West Virginia is Risking the Future of the U.S. Constitution (Updated)

by Betty Rivard and Ted Boettner

West Virginia has been targeted by a number of conservative groups to adopt a resolution calling on Congress to convene a constitutional convention of the states, with the goal of adopting a balanced budget amendment (BBA). Opponents from across the full political spectrum are alarmed that a convention of the states can create turmoil in the country, jeopardize the U.S. Constitution, and divert the nation and the states from the critical issues that they need to resolve on an ongoing basis. It was reported today that Ohio Governor John Kasich will be in Charleston West Virginia this Thursday ( February 19) to promote a constitutional convention.

The focus on amendments to impose fiscal restraints on the federal government also puts the country and its economy at risk. Our state’s Senate Concurrent Resolution (SCR) 13, introduced today, seeks a constitutional convention to propose a balanced budget amendment under Article V of the U.S. Constitution. And SCR 21, calling for fiscal restraints and term limits, is on tomorrow’s agenda for the Senate Interstate Cooperation Committee. A companion resolution, HCR 47, with 60 sponsors, has been introduced in the House. These resolutions are based on model legislation from the American Legislative Exchange Council and others,  not a constituent-driven action. The House also has a bill,  H.B. 2424,  that  attempts to define the delegate process for the convention. 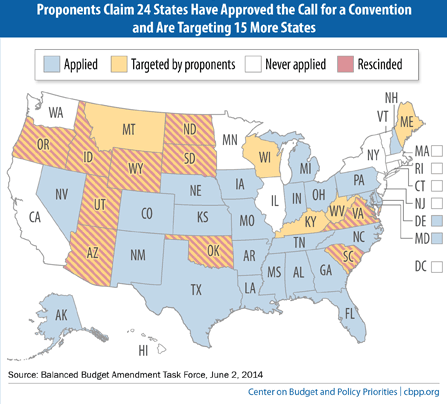 Why is a constitutional convention a serious risk? What are some of the implications of these limits to federal power and, specifically, fiscal restraints?

The most critical risk is that the country and our state could be thrown into extreme turmoil due to the lack of legal agreement about what is involved in a convention of the states. While Article V of the U.S. Constitution provides for the option of amendment via a convention, there is no direction on how this option is to be implemented.

Despite reassurances from conservative groups, there is no consensus among legal scholars that either the states or Congress can control what happens once a convention is convened, even if states specify that it is only for a balanced budget amendment or other limited purpose. Convention delegates could consider any changes to the U.S. Constitution that they want to introduce. The only check and balance is the ratification by at least 38 states, via either their legislature or a convention, before an amendment is adopted. Some legal experts believe that even this ratification process could be open to change by the convention.

As the Center on Budget and Policy Priorities highlights in a recent report:

A number of prominent legal experts have warned that states cannot control a constitutional convention or that calling one could open up the Constitution to significant and unpredictable changes.  For instance:

“I certainly would not want a constitutional convention.  Whoa!  Who knows what would come out of it?”a
Supreme Court Justice Antonin Scalia

“There is no enforceable mechanism to prevent a convention from reporting out wholesale changes to our Constitution and Bill of Rights.”c
Former Supreme Court Justice Arthur Goldberg

“First of all, we have developed orderly procedures over the past couple of centuries for resolving ambiguities , but no comparable procedures for resolving . Second, difficult interpretive questions about the Bill of Rights or the scope of the taxing power or the commerce power tend to arise one at a time, while questions surrounding the convention process would more or less need to be resolved all at once.  And third, the stakes in this case in this instance are vastly greater, because what you’re doing is putting the whole Constitution up for grabs.”d
Professor Laurence Tribe, Harvard Law School

“tate legislators do not have the right to dictate the terms of constitutional debate.  On the contrary, they may be eliminated entirely if Congress decides that state conventions would be more appropriate vehicles for ratification.  The states have the last say on amendments, but the Constitution permits them to consider only those proposals that emerge from a national institution free to consider all possible responses to an alleged constitutional deficiency. . . Nobody thinks we are now in the midst of constitutional crisis. Why, then, should we put the work of the first convention in jeopardy?”e
Professor Bruce Ackerman, Yale Law School

Leaders across the political spectrum have expressed their concerns about a “runaway convention.” Many states have rescinded resolutions that were passed as early as the 1980s, although a number have replaced these with new resolutions in recent years. This earlier move for a convention was stopped just before reaching the required number of 34 states when some states realized the risk of signing on. South Dakota and Utah rejected the new call to action in 2014.

While SCR 13 stipulates that only a balanced budget amendment would be considered during a proposed constitutional convention, this is not the case.

Further Resolved, If the convention called by the Congress is not limited to considering a balanced budget amendment, then any delegates, representatives or participants from the State of West Virginia asked to participate in the convention are authorized to debate and vote only on a proposed amendment or amendments to the United States Constitution requiring that, in the absence of a national emergency, the total of all federal appropriations made by the Congress for any fiscal year may not exceed the total of all estimated federal revenues for that fiscal year, together with any related and appropriate fiscal restraints;

As the Center on Budget and Policy Priorities notes, this final clause (bolded above) “opens the door to any constitutional amendments that a convention might decide fit under this broad rubric, including placing a rigid ceiling on federal spending so that all (or virtually all) deficit reduction has to come from cutting federal programs such as Social Security or Medicare, with little or none coming from revenue-raising measures. Such a ceiling would reduce or eliminate any pressure to produce deficit-reduction packages that pair spending reductions with increased revenue from closing unproductive special-interest tax loopholes or from combating tax avoidance by powerful corporations.”

While H.B. 2424 attempts to lay out a detailed process for delegates and their duties and responsibilities for  a constitutional convention of the states, Article V is silent about how delegates are chosen and what these responsibilities may be. According to a recent study by the Congressional Research Service:

…Congress has traditionally laid claim to broad responsibilities in connection with a convention, including (1) receiving, judging, and recording state applications; (2) establishing procedures to summon a convention; (3) setting the amount of time allotted to its deliberations; (4) determining the number and selection process for its delegates; (5) setting internal convention procedures, including formulae for allocation of votes among the states; and (6) arranging for the formal transmission of any proposed amendments to the states.

Risks of amending the U.S. Constitution to establish new limits on federal powers

The fiscal restraints are in and of themselves a serious risk to the stability of the country. The core principle of most BBA proposals is that the federal government could only pay out what it takes in during the course of a year. This principle jeopardizes benefits to individuals, such as Social Security and Medicare, which depend on the use of a trust fund that carries over from one year to the next. We also know that in hard times the federal government may need to borrow in order to compensate for the revenue shortfalls for our states and our citizens.

Both states and families use controlled indebtedness in order to cover planned expenditures that they cannot afford with their yearly earnings. For example, our School Building Authority uses bonds in order to help build and repair schools. Many of our families have mortgages or student loans to pay for housing and higher education. The BBA would prevent the federal government from using these kinds of common sense fiscal tools.

A BBA, in particular, seems like a simple solution, and there is a lot of popular support for pursuing it. The best response to concerns about deficit spending is to demonstrate real leadership on fiscal policy at every level of government and to make these decisions in a thoughtful and balanced way instead of focusing on arbitrary ways to cut spending. As Robert C. Byrd said over two decades ago:  “I support a balanced budget, and I want to lower the federal deficits…But the answer must not be to perform a lobotomy on our nation’s most sacred principles of checks and balances and separation of powers . . . simply because we are frustrated.”

The leaders of our new legislative majority now have an opportunity to prove their ideas for improving the state’s economy. The fact is that, just like other states, we depend on federal funds in order to function. This is especially true for our aging population that relies heavily on Social Security, Medicare, and Medicaid.

Oppose a Constitutional Convention of the States

Whatever your opinions are about a balanced budget amendment, we all agree that the U.S. Constitution is the backbone of our democracy and that any attempt to risk the foundation that it has provided for our country is misguided at best and disastrous at worst.