The Affordable Care Act has been an undeniable success in West Virginia, both in terms of insuring our residents and boosting our economy. Unfortunately, since 2017, our uninsured rate has increased and enrollment in the ACA marketplace has declined sharply. This is likely due to several factors, including reduced Medicaid participation and confusion over the status of the ACA. But there’s one factor- the difficulty many people have affording their health insurance premiums- that could be alleviated with a simple fix.

Marketplace plans cost thousands of West Virginia residents more than they should because our state is one of only three states where insurers aren’t using a technique called “silver loading” when calculating their premiums. For 2020 health plans, affected West Virginia consumers across the state could have saved thousands of dollars if the state had allowed insurers to utilize silver loading. 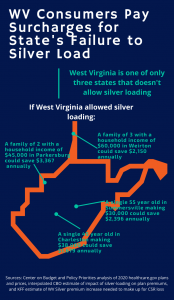 To understand why silver loading is important, we need to go back to 2017, when the Trump Administration stopped reimbursing insurers for providing cost-sharing reductions (CSRs). CSRs lower the deductibles, copayments, and other out-of-pocket spending that low-income marketplace enrollees pay under their plans. CSRs are available only to people with incomes up to 250 percent of the federal poverty level (less than about $62,000 for a family of four) who enroll in a silver plan. Under the ACA, insurers are required to provide CSR plans (silver plans with reduced cost sharing charges) to consumers who qualify. When the Administration stopped paying for CSRs, marketplace insurers still had to provide them and raised their premiums to make up the difference.

In response, most states allowed or required insurers to silver load, which means they built the cost of CSRs into silver plan premiums only. But six states, including West Virginia, required insurers to “broad load,” meaning they built CSR costs into premiums for all metal levels. Since then, three more states shifted from broad loading to silver loading. But not West Virginia.

While enrollment in the ACA’s marketplaces declined by nine percent nationally between 2017 and 2019, West Virginia’s Marketplace saw a much larger drop of 34 percent, the second-highest decline in the nation. Silver loading has driven a significant drop in the premiums that subsidy-eligible enrollees pay in most states, but in West Virginia net premiums for this population have increased by 16 percent, the largest increase in the country. 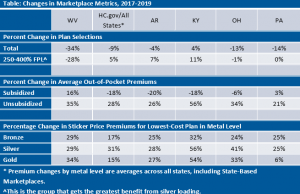 Based on actual 2019 plan selections, 6,791 West Virginia marketplace consumers would be paying less in monthly premiums had the state adopted silver loading. If trends that we’ve seen in other silver-loading states occurred where consumers tend to shift toward non-silver plans, more than 9,000 consumers would pay less under silver loading, compared to about 500 who would pay more (and it’s worth noting that those 500 consumers could avoid paying more by enrolling in a bronze or gold plan instead).

With open enrollment starting on November 1, rates have been finalized for 2020. But soon enough, insurers will start developing their premiums for 2021 marketplace plans. Our state insurance department should allow them to silver load and help make premiums more affordable for thousands of West Virginians. If this doesn’t happen, our residents will continue to pay the price.

NOTE: While consumers could see significant savings if West Virginia were to silver load, there are still affordable plans available for the majority of West Virginia consumers. West Virginians who are not eligible for health coverage through Medicare, Medicaid, or an employer, as well as those who currently purchase health insurance through the exchange via www.healthcare.gov should take the time to look at their options. In 2019, 88 percent of Marketplace consumers were eligible for premium tax credits, which lowered the cost of their monthly premiums, and 70 percent of consumers will qualify for a plan that costs less than $150 per month. Open enrollment for 2020 health plans will take place between November 1- December 15, 2019. Visit healthcare.gov for more information, and find local in-person help at wvinsurance.gov.