Blog Posts > The Historical and Future Decline of the Coal Economy
August 17, 2010

The Historical and Future Decline of the Coal Economy

A few blogs posts ago, I showed a chart that illustrated the historical decline in coal employment and production in West Virginia. In 1975, the coal industry directly employed 55,000 workers and accounted for about 20 percent of our state’s economy (GrossState Product).  Today, the coal industry directly employs 19,000 workers and makes up just six percent of our state’s economy.

So, what does the future hold for the coal economy in the Mountain State? Both West Virginia University  and the U.S. Energy Information Administration are forecasting a decline in coal production over the next 20 years. However, there’s a sizable gap between there respective forecasts. EIA is projecting a decline of 35% (164m tons to 107m in 2030) and WVU is expecting a 17% decline in production (158m tons to 130m in 2030). Either way, the trend is downward. 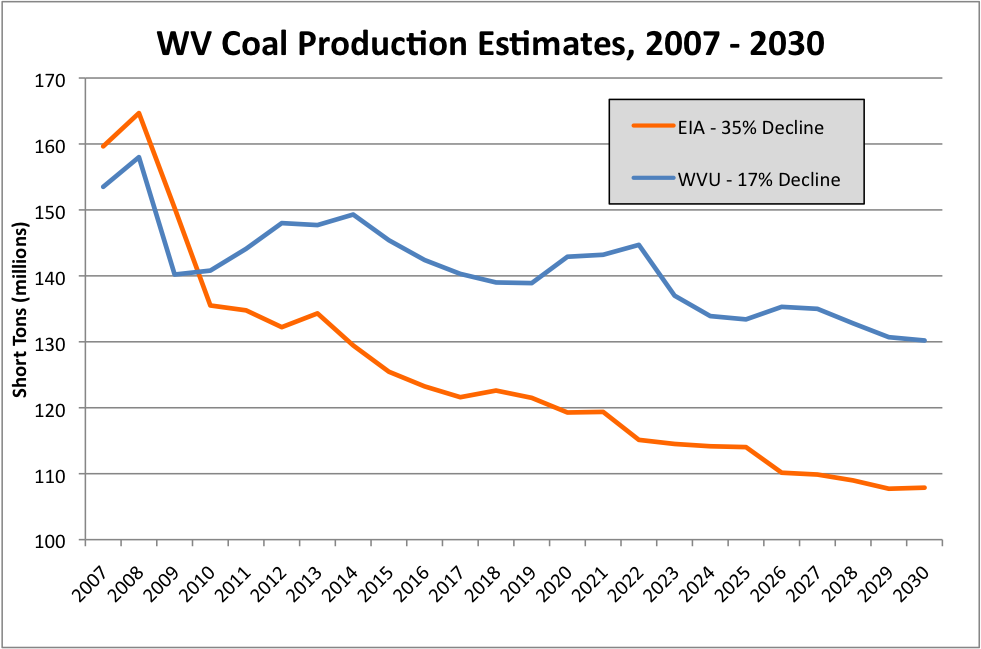 It’s important to note that both forecasts are based on 2009 state and federal laws; so neither takes into consideration MTR regulations or pending climate change legislation. The projected decline is based primarily on economic forces out of the state’s control, such as lower labor productivity (short ton per worker), thinner seams, and competition from other coal producing regions (e.g. Powder River Basin) and for other energy sources like natural gas (DOE predicts that 90% of new power plants built in the next 20 years will burn natural gas).
In the face of further erosion of coal-related jobs, you’d think West Virginia’s Congressional delegation would be trying to develop new strategies to diversity and transition our state economy. One great place to start would be heed the call of the late Senator Byrd to join others in passing a comprehensive clean energy and climate change bill that protects our workers and communities. As the ole political saying goes, you’re either at the table or on the table.