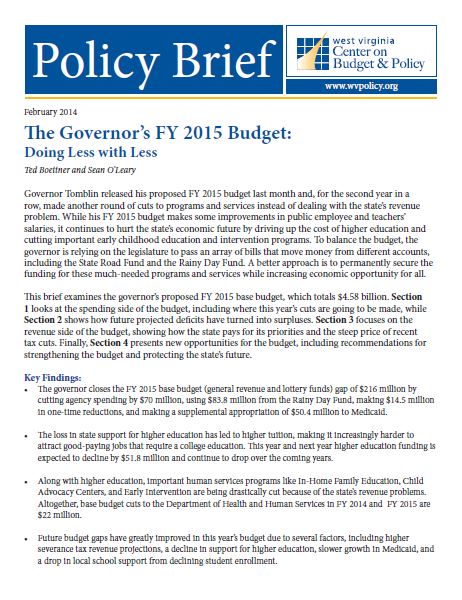 Governor Tomblin released his proposed FY 2015 budget last month and, for the second year in a row, made another round of cuts to programs and services instead of dealing with the state’s revenue problem. While his FY 2015 budget makes some improvements in public employee and teachers’ salaries, it continues to hurt the state’s economic future by driving up the cost of higher education and cutting important early childhood education and intervention programs. To balance the budget, the governor is relying on the legislature to pass an array of bills that move money from different accounts, including the State Road Fund and the Rainy Day Fund. A better approach is to permanently secure the funding for these much-needed programs and services while increasing economic opportunity for all. Read PDF of report.

This brief examines the governor’s proposed FY 2015 base budget, which totals $4.58 billion. Section 1 looks at the spending side of the budget, including where this year’s cuts are going to be made, while Section 2 shows how future projected deficits have turned into surpluses. Section 3 focuses on the revenue side of the budget, showing how the state pays for its priorities and the steep price of recent tax cuts. Finally, Section 4 presents new opportunities for the budget, including recommendations for strengthening the budget and protecting the state’s future.

• The governor closes the FY 2015 base budget (general revenue and lottery funds) gap of $216 million by cutting agency spending by $70 million, using $83.8 million from the Rainy Day Fund, making $14.5 million in one-time reductions, and making a supplemental appropriation of $50.4 million to Medicaid.

• The loss in state support for higher education has led to higher tuition, making it increasingly harder to attract good-paying jobs that require a college education. This year and next year higher education funding is expected to decline by $51.8 million and continue to drop over the coming years.

• Along with higher education, important human services programs like In-Home Family Education, Child Advocacy Centers, and Early Intervention are being drastically cut because of the state’s revenue problems. Altogether, base budget cuts to the Department of Health and Human Services in FY 2014 and FY 2015 are $22 million.

• Future budget gaps have greatly improved in this year’s budget due to several factors, including higher severance tax revenue projections, a decline in support for higher education, slower growth in Medicaid, and a drop in local school support from declining student enrollment.

• The base budget for FY 2015 is lower than seven years ago. This decline is primarily associated with major tax cuts enacted in 2006 and 2007 that will lower revenues by an estimated $425 million in FY 2015.

• Because of the large reduction to its revenue base, the state is investing less than it did before the tax cuts were enacted. General revenue funds as a share of state personal income have declined from above seven percent in 2006 to 6.2 percent in 2013 and will continue to fall in the coming years.

• The only major source of revenue growth from FY 2015 to FY 2018 will be in severance, personal income, and sales and use taxes.

• To grow our economy and build a shared prosperity, the state will have to have the resources necessary to invest in areas like higher education and human services. Options include increasing the tobacco products tax, expanding the sales tax to more services, taxing high-income earners that have more discretionary income, scaling back personal income exemptions and coal tax preferences, and extending the workers’ compensation debt taxes on natural resources.