The Charleston Tax Shift: Is It Worth It?

Today we learned that Charleston Mayor Danny Jones is proposing a tax reform package to pay for upgrades to the Charleston Civic Center. The tax reform package includes both tax reductions and the adoption of a city sales tax. The tax reductions include eliminating the Business and Occupation (B&O) tax on manufacturing and reducing the B&O tax on retail in the city from 0.5 to 0.35 percent. Under the state’s home-rule pilot project, the city would implement a 0.5 percent sales tax on everything but automobiles and non-prepared foods.

According to city officials, the $3.6 million in estimated new revenue would go toward renovating the Civic Center  – which is estimated to cost between $45 and $60 million once all renovations are complete. While the Civic Center may need to be renovated, what is unclear is why the city would use this as an opportunity to lower taxes on manufacturers who likely sell much of their products out of state. On the other hand, the strategy of lowering the B&O rate on retailers is more clear. I imagine it is because most sales tax revenues are collected by retailers and that they are afraid that increasing the sales tax will hurt their businesses, therefore they need to lower their B&O tax.

However, instead of lowering their B&O tax why not impose a smaller sales tax rate? For instance, based on the figures above, a 0.3 percent sales tax would produce $3.7 million and lower the rate for consumers. One thing we know for certain is that a new sales tax will fall heavily on low- and middle-income taxpayers. As the chart below from ITEP’s “Who Pays?” report highlights, sales taxes are highly regressive and fall disproportionately on families with low incomes. For example, the bottom 20 percent of West Virginia families paid 3.1 percent of their family income in sales taxes (6.4% if you include sales and excise taxes) while the top one percent of income earners only pay 0.6 percent of their income in sales taxes (1% if you include all sales and excise taxes). 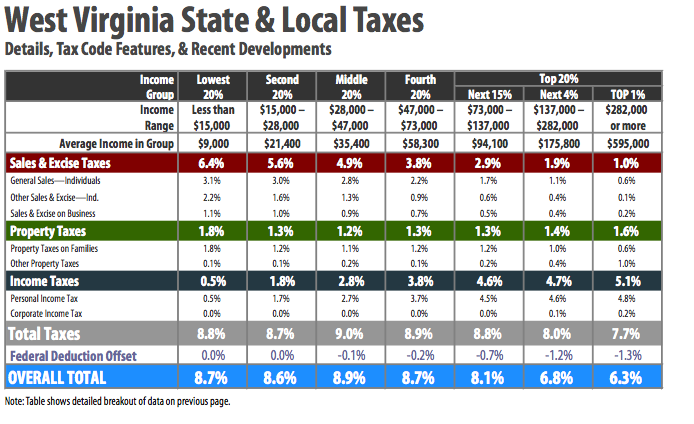 The Business & Occupation tax functions as a gross receipts tax on annual gross income of business.  While no one knows for sure who ultimately pays the local B&O tax, much of it may be exported out of state (perhaps close to 50%), a lot of it falls on consumers, some may fall on workers, and a good portion falls on business owners as a cost of doing business. The last part is probably why businesses prefer the sales tax, because the B&O tax may be harder to pass along to consumers in a competitive market.

Another question is why city residents should pay for the Civic Center renovations instead of the hotels and retail stores that will be the biggest beneficiaries? If I was wearing my libertarian policy wonk hat, I’d say that if the Civic Center renovations are needed so badly why doesn’t the private sector make the investment? Don’t they know a good investment when they see one?  While I am all for jobs and a strong economy in Charleston, I need to know that businesses have some more skin in the game. After all, they benefit just as much as families from emergency services and public goods and it is important that they also contribute their fair share.