Today, the House will vote on HB 2933, the latest version of “tax reform” in the state. HB 2933 would broaden the sales tax base, lower the sales tax rate to 5%, and create a flat 5.1% income tax rate. The bill would drastically increase West Virginia’s already regressive tax system. The vast majority of West Virginians would pay more in state taxes under the proposal, while the wealthiest 1% would receive an average tax cut of over $6,000. 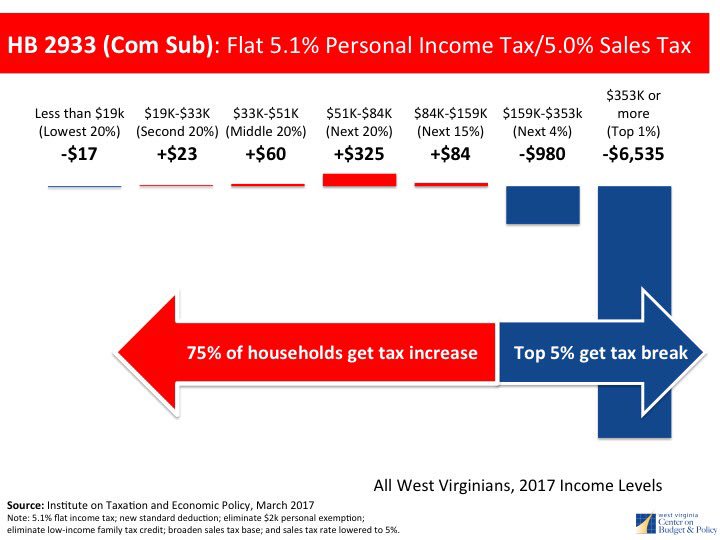 HB 2933, along with the other tax-reform proposals floated by the legislature, is little more than a tax cut for the wealthy, paid for by higher taxes on the poor and middle class, and budget cuts. But not to worry, says the conservative Tax Foundation. According to the Tax Foundation, cutting taxes on the richest 5% of West Virginians and raising them on nearly everyone else would give the state the 10th best Business Tax Climate in the country, 8 spots higher than its current rank of 18th. West Virginia would be more competitive and have an advantage over our neighboring states. Sounds great, right? West Virginia is rarely in the top 10 of anything, and being one of the top states for business taxes has got to be good for the struggling state, right? Unfortunately, we’ve heard this song and dance before, and it always ends the same way.

If all this is ringing a bell, it’s because we’ve heard it all before. The Tax Foundation said the same thing 10 years ago, the last time West Virginia was on the verge of a major tax reform. The Tax Foundation said that the 2007 tax reform was, “What West Virginia Needs to Do in Order to Compete in the 21st Century.” And West Virginia listened. The state phased in a series of major business tax cuts that reduced business taxes by $225 million by 2015. And, as a result, the state’s “Business Tax Climate” improved from 34th in 2007 to 18th in 2017, an improvement of 16 spots. Only two states have had a greater increase in their Business Tax Climate ranking than West Virginia since 2007.

And, all the while, as the state’s Business Tax Climate dramatically improved, the tax cuts blew a hole in the state’s budget, putting the state in a near-perpetual budget crisis. This has led to, among other things, major cuts to higher education, making college less affordable in a state with the least-educated workforce.

One thing our improving tax climate didn’t translate into was any discernible economic growth. While West Virginia has one of the most improved Business Tax Climates in the country, its job growth has been non-existent. In fact, West Virginia had more private-sector jobs in 2007 than it does today.

So don’t get too excited about the Tax Foundation’s claims. As we’ve noted before, their rankings are a poor predictor of economic growth, and have served West Virginia poorly. The Tax Foundation has an anti-tax ideology, and that comes first in its rankings, regardless of the effect of its policies on the public investments that states like West Virginia need to prosper, like infrastructure and education.

Just as it was 10 years ago, the Tax Foundation’s favored policies are tax cuts for businesses and the wealthy at the expense of everything else that matters. And West Virginia learned the hard way, that recipe did little more than deprive the state of its ability to invest in the future. Why would we expect anything different this time?