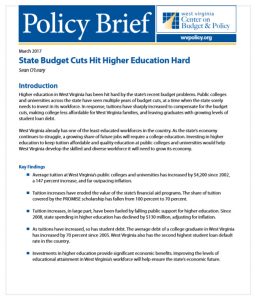 Higher education in West Virginia has been hit hard by the state’s recent budget problems. Public colleges and universities across the state have seen multiple years of budget cuts, at a time when the state sorely needs to invest in its workforce. In response, tuitions have sharply increased to compensate for the budget cuts, making college less affordable for West Virginia families, and leaving graduates with growing levels of student loan debt. Read PDF here.

West Virginia already has one of the least-educated workforces in the country. As the state’s economy continues to struggle, a growing share of future jobs will require a college education. Investing in higher education to keep tuition affordable and quality education at public colleges and universities would help West Virginia develop the skilled and diverse workforce it will need to grow its economy.