State of Working West Virginia 2012 — In Depth: The Gas Boom and Coal Bust 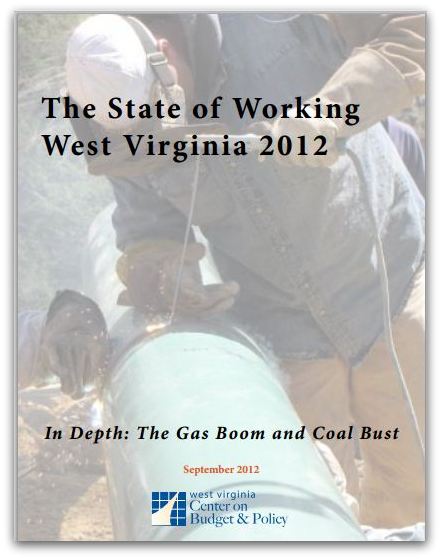 While the state slowly recovers from the Great Recession, struggles remain. There is only one job opening for every four people looking for work, the state has the lowest workforce participation rate in the nation, and West Virginia workers earn, on average, one dollar less an hour than the national average. Raising the minimum wage, creating a “Future Fund” by setting aside part of the severance tax on coal and gas, and expanding Medicaid under the Affordable Care Act are just a few of the policy recommendations in this year’s report. Read

It is not unusual in West Virginia to hear strident warnings about the state’s business climate, the status of which is said to range from healthy to “hellhole.” Whatever the merit of such statements, it is only fitting at least once a year to change the question and to ask instead what the climate is for West Virginia’s working people.

Working people, after all, are the drivers of our economy as well as just about everything that moves in the state. They mine the coal, extract the gas, manufacture the goods, deliver the goods and provide the services, and care for the people. Their compensation, in the form of wages and benefits, provides most of the demand that drives the economy. By virtue of their labor and spending, they are arguably our real wealth and job creators.

And, unlike the gas, oil and coal that lie beneath our soil, they can and do move all by themselves, often heading for better opportunities elsewhere when these are not to be found in the Mountain State. This report will examine the most recent data on the well-being of working families and make recommendations about policy decisions that could maximize their well-being.

This series, The State of Working West Virginia, was first released in early 2008 at the beginning of the Great Recession. Not surprisingly, each subsequent report has focused on the aftereffects of that economic disaster. Here are some key findings which are described at greater length in the ensuing report:

During the worst period the recession, which hit bottom in February 2010, West Virginia lost 21,300 jobs. Despite a long- term, if unsteady, upward trend, as of the summer of 2012 there were 3,200 fewer jobs then before the crash. West Virginia would have had to create 27,000 jobs to maintain pre-recession job levels given population growth.

Where the jobs are

More than half of all jobs in West Virginia are concentrated in three sectors: government; trade, transportation and utilities; and education and health services. The public sector is the largest employer, comprising over 20 percent of nonfarm employment. Given recent calls for slashing the state budget, which are due largely to tax cuts that did not pay for themselves, this sector could face a decline in employment.

How the jobs are

When viewed over several decades, job quality has declined in terms of work-related benefits. Less than half of state workers are covered by employer-provided pensions and only slightly over half receive employer-provided health insurance. Meanwhile, inflation-adjusted median wages declined between 2010 and 2011 and were over a dollar an hour below the national average, even though low-wage West Virginia workers are better educated than in the past. Moreover, what wage growth that did occur did so among higher paid workers, thus increasing inequality.

One disturbing trend about West Virginia’s workforce is its steady decline. Our labor force participation rate, which is the share of people 16 and older who are working or seeking work, is the lowest in the nation at 54.3 percent. Much of this drop has occurred among younger workers, aged 16 to 24, while workers 55 and older have tended to say on the job.

Compared with the national average, West Virginia’s labor force is older, less educated and less diverse. Nearly one in four state workers is aged 55 or older, a level exceeded by only six other states.

What are the long-term projections?

Long-term projections by West Virginia University’s Bureau of Business and Economic Research highlight the urgency of making West Virginia an attractive place for people to live and work. As detailed below, our state is projected to lose residents below the age of 65 both in terms of numbers and percentage of the population, while state residents above that age will dramatically increase. The most dramatic increase is in residents above age 75. Unless we can attract and retain working families, we are headed for a demographic disaster.

Who are the unemployed?
West Virginia’s unemployment rate has fluctuated in recent months but is still higher than pre-recession levels. Younger workers between the ages of 16 and 24 are especially hard hit by unemployment. Although they make up less than 15 percent of the workforce, they comprise a third of the unemployed. Unemployment rates are also higher than average for men, African-Americans of both sexes, and for those with low levels of educational attainment. Another disturbing trend is one toward long-term unemployment. About four in 10 jobless workers have been so for over six months.

Is there a mismatch?

It is frequently asserted that the structural cause of today’s unemployment is a mismatch between the skills of available workers and those required by employers. While that may be a contributing factor, low levels of demand are a much greater one. By June 2012, there were nearly four jobless West Virginians for every new job opening. This, too, is a legacy of the Great Recession.

The proverbial elephant in the room

Much talk, much of it very loud, in West Virginia today centers on mining and natural gas extraction. While many political leaders attribute coal industry woes to a regulatory “war on coal,” other factors such as cheap natural gas and competition from other coal markets are the driving forces, as we will argue below. Coal employment actually increased over the last decade, although there are signs of a downturn at present that is likely to continue. Projections from the U.S. Energy Information Administration are particularly grim for southern West Virginia, although northern West Virginia will likely fare better.

Meanwhile a southern coal bust is accompanied by a northern gas boom due to Marcellus Shale play. These shifting tides will provide challenges as well as opportunities. Rather than grandstanding, state leaders would do better to help West Virginians plan for an economic transition for areas of declining employment even as they must maximize the opportunities and minimize any damage created in areas of growth. State leaders should also take the steps necessary to create permanent sources of wealth from nonrenewable resources.

In sum, the economic situation for West Virginia’s workers at the moment is less dire than at the depth of the Great Recession, but aftershocks remain and even more serious challenges lie ahead. Improving the well-being of West Virginia’s working families is necessary for our very future—but it will not be easy nor happen without effort.