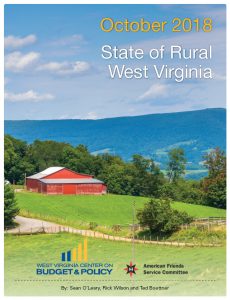 West Virginia’s population is increasingly living in urban areas, with those urban areas experiencing all the state’s job growth in the past quarter century, leaving rural West Virginia behind in many key areas, according to a new West Virginia Center on Budget and Policy report.

Over the past decade, West Virginia has been one of the few states to lose population, and that loss has largely occurred in the state’s rural areas. Between the 2000 and 2010 decennial Census, West Virginia’s metro areas saw an increase in population of nearly 50,000 people, a five percent increase. In contrast, rural West Virginia experienced a population loss of roughly 4,600 people, a 0.6 percent decline.

Sustainable growth and broader economic growth can occur in rural areas of the state if policymakers put forth policies that invest in the people and public structures that provide the foundation for economic opportunity and make necessary quality of life improvements.

These policies can include: expanding high-speed internet, addressing the opioid crisis and improving rural health, enacting policies to boost wages and labor force participation, tax reforms that would provide revenue to invest in the state and policies that reduce racial disparities.