Last week, the U.S. House passed a “farm bill” that for the first time in decades did not include food assistance or SNAP (formerly known as the Food Stamp Program) for vulnerable children and families. This move came on the heels of an earlier version passed by the U.S. House in June that reduced SNAP by $20.5 billion over the next decade by limiting eligibility options for states or what is known as  “categorical eligibility.” The House bill will also make it more difficult for the state to implement the West Virginia Feed to Achieve Act by not allowing children in SNAP to be automatically enrolled in the free school meals program.

Food assistance is crucial for low-income families in West Virginia, many of which work hard but are unable to afford basic necessities because of the low wages they are paid at places like Walmart. Cutting the nation’s most important anti-hunger program could have a damaging impact on vulnerable populations in West Virginia.

According to WV-DHHR, 341,516 people (about 1 in 5 people) received a SNAP benefits in May 2013 and the average monthly benefit per household member was $119 or just $1.35 per person per meal. So it is important to realize that this isn’t a lot of money to many people – try buying a meal for $1.35 – but it is enough to make a real difference in the lives of people at or near poverty. This is especially true for children.  Approximately 39 percent – or nearly two-fifths – of those who received SNAP benefits in the Mountain State are children and almost a quarter is adults living with children. SNAP is also important for seniors and people that are disabled, with 1 in 5 people on SNAP in the state who are either disabled or elderly. 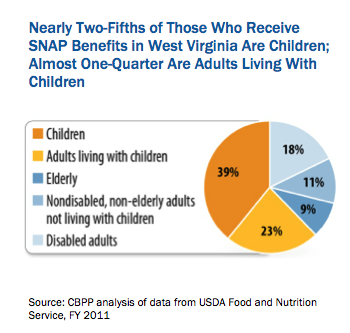 Before the Great Recession began, about 15 percent of the state’s population was enrolled in SNAP. Today, that number has jumped to about 19 percent.  The graph below looks at SNAP participation rates and the share of underemployed (U-6) in the state. The underemployment rate includes the unemployed, those looking for full-time work but are working part-time, and those who aren’t currently searching because no jobs are available. Therefore, it is a good measure of economic distress.

As you can see, and as the CBO pointed out nationally, the rise in SNAP participation increased dramatically as the number of underemployed in the state rose due to the recession and the slow recovery.

As such, SNAP has been a crucial part of our state’s economy recovery, pumping about $500 million into the state’s economy in 2012. Without these critical resources, our state would be suffering from higher underemployment and less economic activity. According to Moody’s Analytics, every $1 in SNAP benefits generates $1.70 in economic activity during a weak economy .

As the recovery picks up, participation in the program will subside and return back to pre-recession levels. This means that SNAP, unlike our expensive and inefficient health care system, is not contributing to our long-term budgetary problems. Therefore, there is little economic justification for imposing huge SNAP cuts on most vulnerable children and families out of deficit concerns.

SNAP is well-managed and effective

While some critics believe that SNAP is prone to a lot of waste, fraud, and abuse, this is not the case. In fact, SNAP is one of the most effective and efficient government program in the country. The  error rates for SNAP have dropped dramatically over the last decade, from more than 8 percent in the 1990s to an all-time low of 3.4 percent in 2012. According to the Center on Budget and Policy Priorities, “USDA has cut “trafficking” — the sale of SNAP benefits for cash, which violates federal law — by three-quarters over the past 15 years.” Today, only 1 percent, or $1 in every $100 of SNAP benefits, is trafficked.

The truth is SNAP works. Low-income people on SNAP are not only able to feed themselves and their families, but it allows them to use their limited incomes for other other purposes, such as paying rent, filling up the car with gas, or buying school supplies for their children. And the money they spend using SNAP goes right back into our economy and local grocery stores.

“McDowell County mines more coal than it ever has in its history, probably more coal than any county in the United States,” Kennedy said in a 1960 speech in Canton, Ohio.” Yet there are more people getting surplus food packages in McDowell County than any county in the United States. The reason is that machines are doing the jobs of men, and we have not been able to find jobs for those men.”

In fulfillment of his campaign promise, Kennedy signed an Executive Order announcing the food stamp pilot program.On May 29, 1961 Chloe and Alderson Muncy of McDowell County became the first recipients of food stamps. Today the program is called the Supplemental Nutrition Assistance Program and it serves over 47 million Americans and 323,000 West Virginians.

The SNAP program is a major national accomplishment. Before it emerged, many more West Virginians were growing up in hunger and in deep poverty. A recent academic study that appeared last year in the National Bureau of Economic Research bear this out. As noted by poverty expert Arloc Sherman, the “study found that the babies benefited from the introduction and expansion of food stamps in the 1960s and 1970s and found that they grew up to be healthier and more likely to finish high school than their peers born in counties where the program had not yet been instituted.”

As noted earlier, the bill passed by the House in June could make it more difficult for the state to implement the WV Feed to Achieve Act, which aims to maximize eligibility and funds available in the National School Lunch and Breakfast Program to provide universal free school meals to all students. Since the bill strips away automatic enrollment and eligibility for free school meals for those that receive SNAP, it could  reduce the number of children enrolled in the National School Lunch and Breakfast Program and limit county school board from maximizing participation in the program. According to the Congressional Budget Office, an estimated 210,000 children in families whose eligibility for free school meals is tied to their receipt of SNAP would lose free school meals.

Congress should protect and strengthen SNAP

While it is unclear how many children and families could be impacted by Congressional action to cut SNAP benefits, the program is vital to protecting our state’s children, seniors, and working families. According to the Food Research and Action Center, West Virginia ranks 3rd highest in the nation with 22.5 percent of our residents that did not have enough money to buy they food they needed for their families. Instead of increasing hunger in our state,  our congressional leaders should be exploring ways to strengthen the SNAP program instead of tearing it down.