As the Gazette reported on Wednesday, the WV Department of Highways is pushing a bill to study the feasibility of replacing or supplementing the motor fuel tax with a vehicle miles traveled (VMT)  tax to help address the declining State Road Fund revenue which is partly due to more fuel efficient vehicles. The VMT tax would place a small fee on cars and trucks for each mile they drove – often referred to as “pay-as-you-drive” tax –  instead of (or to complement) the state gasoline tax, which is 34.7 cents per gallon of gasoline. Before we look at the mechanics and the advantages and drawbacks of the VMT tax, it is important to first delve into the fiscal problems facing our state road fund.

Currently, the State Road Fund is made up of four central revenue sources, including federal matching funds, motor fuel taxes, registration fees, and a 5 percent sales (privilege) tax. All together, the state is planning to appropriate $1.2 billion for the Department of Highways in FY 2014. While federal funds are the largest single revenue source ($470.4 million), the state gas tax ($430 million), sales tax ($175.5 million), and registration fees ($92.7 million) are the the the central state sources of revenue of the State Road Fund. These funds are used to match federal funds for interstate construction and maintenance and for other state road and bridge construction. The state also pays for roads through general obligation debt such as road bonds. In FY 2013, the total outstanding debt on road bonds was $245 million in 2013.  (The state also collects toll fees on the WV Turnpike ($82.1 million in FY 2012) operated by the WV Parkways Authority, but this money is solely used for the I-64 Turnpike and it does not receive federal matching funds or go toward other roads.)

Over the last several decades, the sources of tax revenue to the State Road Fund has shifted away from registration fees and more toward the motor fuel taxes. From 1980 to 2014, fuels taxes have grown 417 percent, sales taxes by 332 percent, and registration fees by only 194 percent. In 1970, registration fees made up 30 percent of revenue and today it only comprises 13 percent.

Over the last several decades, the state has found that its central revenue source, the motor fuel tax (which contains a flat rate of 20.5 cents per gallon and a variable rate of 5 percent based on the wholesale price of gasoline), cannot catch up to the increasing fuel efficiency of cars and trucks in the state. But as fuel efficiency has increased, so has the number of miles driven in the state, putting more stress on maintaining roads and bridges. According to the Federal Highway Administration (FHA), from 1980 to 2010, the number of miles driven per vehicle in West Virginia has grown from  8,141 to 13, 377 and the average miles per gallon has grown from 11.3 to 16.8. So, people are driving father on less gas, which means less revenue for the state.

One way to look at the declining power of State Road Fund revenue to meet the increased use of roads is by looking at vehicle miles traveled (VMT) in the state. According to FHA, in 1980 the total VMT was 10.7 billion miles. By 2010, this number almost doubled reaching 19.2 billion.  The chart below looks at State Road Fund Revenue per VMT in West Virginia (FHA data) from 1980 to 2010. The blue line looks at inflation adjusted State Road Fund revenue using the CPI-U-RS (the standard inflation measure for urban consumers) and the red line uses the Producer Price Index (PPI) for highway and street construction  that was discontinued in 2010.

As you can see, the state is receiving less revenue per mile driven using either inflation measure. Using the CPI-U-RS (blue line), the state received about 5 cents per VMT in 1980 compared to about 3 cents per VMT in 2010. And the red line (using the more accurate measure of price changes in highway & street construction), shows that the state received about 4.6 cents per VMT in 1987 (the first year this inflation measure was available) compared to 3.2 cents in 2009 (the last year the PPI for highways was available). Either way you cut it, people are traveling more and the state is receiving less in revenue. Over this same time, the state has also seen a large growth in the number of trucks, growing from 387,000 in 1980 to 730,000 in 2010. Meanwhile, the total number of automobiles in the state has shrunk from 929,000 n 1980 to 703,00 in 2010. With more trucks on our state roads creating more stress, it is no wonder that the state is having trouble financing road construction.

So, with all of this in mind, should WV adopt a vehicle miles traveled (VMT) tax?

While the VMT tax is gaining momentum around the country, so far no state is using it to fund its transportation system. In 2006, the state of Oregon began studying the idea  and recently it tested the concept in a pilot program in the city of Portland, but it has not made plans to implement it statewide. Several other states are also studying the idea, including our neighboring states Pennsylvania and Maryland.  (This may partly explains why the WV DOH wants to study the concept as well. As we’ve talked about before, action at the state level usually encourages action at the federal level).  The federal government also been studying the idea for a number of years. Recently, the Congressional Budget Office (pdf) and the Government Accountability Office (pdf) examined the advantages and disadvantages of a VMT tax at the federal level and found that for the most part it was a good idea. The GAO concluded: “Mileage-­based user fee initiatives in the United States and abroad show that such fees can lead to more equitable and efficient use of roadways by charging drivers based on their actual road use and by providing pricing incentives to reduce road use.”

While there are distinct advantages to adopting a VMT tax in West Virginia, there are also several drawbacks.These include privacy issues, costs of implementation, how to charge out-of-state drivers, and how the VMT tax could discourage the use of more fuel efficient vehicles. A lot would also depend on how the state imposes the fees per mile on each vehicle. Would heavy trucks that cause more damage to the roads be charged more? Would we charge more during peak hours of traffic? Would we charge rural drivers the same as those that live in the cities? Lots of details to unpack. The table from the CBO report provides good comparison between the federal gas tax and a VMT tax. 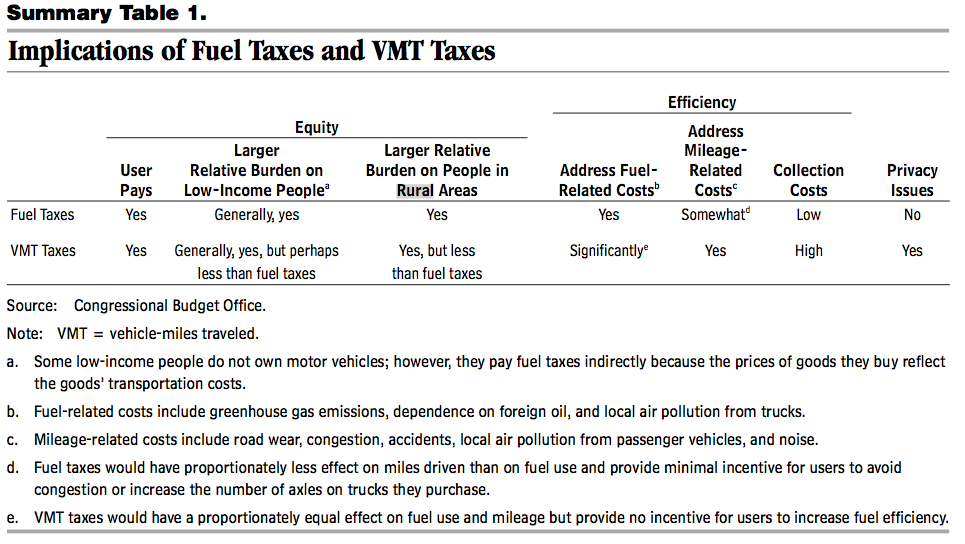 Currently, most states looking at the VMT tax want to attach a GPS device to your vehicle in order collect mileage and charge you a fee. There have been numerous complaints about this from civil liberty groups and the general public. Nobody likes big brother in their car and I imagine this would not go over well in the Mountain State. The good news is that the WV DOH has talked about using state inspection stations (your local gas station, usually) to collect your odometer reading each year when you get your car inspected. While this would be a much less intrusive way to collect mileage, it remains to be seen if it could be done efficiently and what the costs will be.

Perhaps the biggest hurdle would be how to collect mileage fees from out-of-state drivers who benefit from our state’s road system but would not have to pay. According to the WV Parkways Authority, only 24 percent of toll revenues from the WV Turnpike come from WV passenger cars (16%) and commercial vehicles (8%). Based on the 2010 annual mileage figures in West Virginia, a flat 3.3 cents-per-mile fee on vehicles traveled would have produce about $634 million in revenue in 2010 or about $441 annually per vehicle. However, if a large share of those vehicles are out-of-state drivers for whom we cannot collect fees from, than the mileage fee would have to be much higher to reach the same amount of revenue.

Another hurdle is fuel efficiency. As the CBO table highlights, VMT taxes would provide little incentive to purchase fuel efficiency vehicles. This could be partly overcome by implementing a “green fee” on vehicle registration and title fees as the Massachusetts Department of Highways has suggested in its 21st Century Transportation Plan. According the plan, “Under a ‘green fee,’ existing vehicle registration and title fees would be assessed additional fees based on a vehicle’s level of carbon emissions. Under a green fee scenario, owners of motorcycles and hybrid cars could pay an extra $15 every two years for registrations, car and hybrid SUV owners could pay an additional $30 every two years, SUV and light truck owners could pay an additional $60, and heavy truck owners could pay an additional $85. The fee would be adjusted to reflect the age of the vehicle and the anticipated emissions produced – higher polluting vehicles would pay more, while cleaner vehicles would pay less.”

West Virginia is not unique in that it is having problems shoring up its State Road Fund to pay for road construction and maintenance. All across the country, states are finding it increasingly difficult to fund their transportation systems with fuel taxes. While it is important that the state is looking at alternatives like the VMT tax, it could be decades until it is up and running unless the federal government adopts such a system. In the short-run, the state will need to find additional revenue if it wants to maintain its current infrastructure needs and they may want to look at other alternatives. In my next post, I will look what some of those alternatives could be.