Romney/Ryan Budgets: How Would They Impact West Virginia?

While there has been a lot of debate about how President Obama’s environmental policies would hurt West Virginia’s coal industry and economy, there has been very little discussion about the impact of  Governor Romney and Representative Paul Ryan‘s proposed policies on the Mountain State.

Both Romney and Ryan have proposed drastic changes to federal spending and programs that could dramatically impact families in West Virginia. These policies could especially impact elders and low-wage workers in the state.  While both Romney and Ryan have proposed repealing the Affordable Care Act, they have also outlined specific budget proposals that would cut federal programs such as Medicare, Medicaid, Social Security, and non-discretionary federal spending.

For example, in 2011 approximately $12.7 billion or 20.5 percent of the state’s $62 billion in personal income came from Medicare, Medicaid, and Social Security. The U.S. average was 12.8 percent.  Among the 50 states and the District of Columbia, West Virginia relies more heavily on these three programs for personal income than any other state in the country (see chart below). As mentioned above, the central reason why West Virginia relies heavily on these three programs is because the state has the second highest share of people over 65 years old in the country. Another reason is our state’s lack of economic diversity and opportunity, the high number of low-wage jobs (Wal-Mart is our #1 employer), and the long history of poverty associated with the booms and busts of the extractive industry. 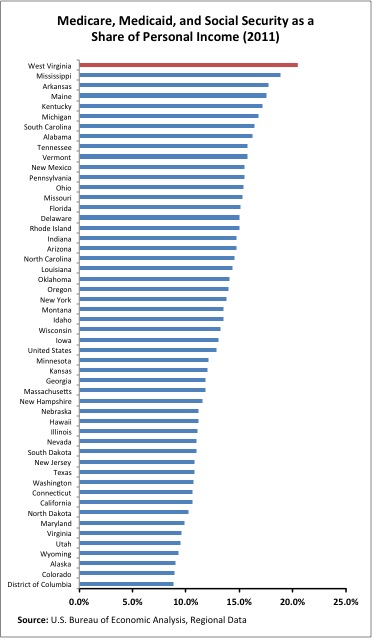 So how would Romney and Ryan’s proposed federal budget policies would impact the Mountain State? Let first look at the three programs discussed above.

Medicare: Rep. Ryan’s 2012 budget (which passed the House in March of 2012) would raise the eligibility age of Medicare from 65 to 67 and would replace Medicare’s guarantee of health coverage with premium-support payments (sometimes called vouchers) to seniors starting in 2023. The first change would mean many our state residents who are 65 or 66 years-old would lose health coverage because they would not have access to Medicare, employer-based plan (or PEIA if they are state employees or school teachers), or the health care exchanges. They would be forced to buy coverage in the individual market, which many could not afford. Because of the limited growth in premium support payments in the Ryan budget, the Congressional Budget Office projects that by 2022 an average 67-year-old beneficiary would see their out-of-pocket expenses nearly double – from $6,150 to $12,500 – compared to traditional Medicare. The Romney budget to cap total federal government spending at 20 percent  would reduce Medicare by $1 trillion from 2014-2022, according to a recent report by the Center on Budget and Policy Priorities. In 2011, WV received $4.1 billion in Medicare transfers or about 0.75% of total U.S. Medicare transfers. Assuming the same share of US costs, this would amount to $7.5 billion of lost Medicare payments in WV from 2014-2022.

Medicaid: Rep. Ryan’s budget would repeal the Affordable Care Act, thereby repealing the ACA Medicaid expansion, and turn Medicaid into a block grant program. According to a recent Kaiser Family Foundation report, this would reduce federal Medicaid spending by $1.7 trillion between 2013 and 2022. All together, this would reduce Medicaid spending in West Virginia by 38% or $15.9 billion over this time period. The report also points out that this would reduce enrollment in Medicaid between 216,000 and 259,000. If WV wants to avoid the cuts due to the block grant it will have to spend an additional $1.2 to $2 billion from 2013 to 2022.  An analysis of Romney’s budget shows that federal Medicaid spending would be reduced between 44 percent and 61 percent or $1.5 and $1.9 trillion from 2014 to 2022.

Social Security: While Ryan is on record of supporting the privatization of Social Security and his Road Map for American’s Future  includes plans to partially privatize the program, his budget proposal did not include any drastic changes to Social Security. Romney has been on record advocating for raising the retirement age, indexing benefits, and not increasing the payroll tax to shore up the solvency of the program. A recent report from the Center for Economic and Policy Research shows that this would hit low-income families the hardest and would increase income inequality.

Romney and Ryan’s budget would also dramatically reduce spending on a whole host of other federal programs. For example, under Romney’s budget would require deep cuts in SNAP (food stamps), Children’s Health Insurance Program (SCHIP), and  non-discretionary programs such as aid to elementary and secondary education, veterans’ health care, law enforcement, highways and mass transit, national parks, environmental protection, biomedical and scientific research, housing assistance, the weather service, and air traffic controllers. A recent analysis of Ryan’s budget shows that it would make deep cuts in SNAP that would impact WV. Of the proposed $134 billion in SNAP cuts in Ryan’s budget from 2013-2022, it would cost WV approximately $840 million over this ten year period. Under Ryan’s budget  plan, West Virginia would also lose an estimated 22 percent or $195 million in federal funding for education, clean water, law enforcement, and other state and local services in 2014 alone. Ryan’s plan also would shift other very large costs to West Virginia  by reducing sharply federal funding for highway construction and other transportation projects.

While it is unclear how these policies would unfold if Romney and Ryan are elected in November, it is very clear that they would have a dramatic impact on West Virginia’s economy and especially the state’s  elderly and working families.  While Obama’s proposed regulations on air-pollution and green house gases will impact  the state’s coal economy, it is abundantly clear that Romney/Ryan plans to repeal the Affordable Care Act, drastically reduce federal spending over the coming decades, turn Medicaid into a block grant, and replace Medicare with a voucher plan will have a far greater and pervasive impact on working families in the Mountain State.