On Tuesday, Governor Tomblin revised his estimates for the FY 2017 General Revenue Fund Budget. Since the legislature failed to pass the state budget during the regular session, the governor is expected to call a special session sometime this Spring to pass a budget for FY 2017.

Altogether, the FY 2017 revised revenue estimates for the state’s General Revenue Fund decrease revenues by about $239 million for FY 2017, or from $4.33 billion to about $4.09 billion. About two-thirds, or $147 million, of the lower revenue estimates was due to the legislature’s failure to adopt several of the governor’s proposed revenue measures. These included:

According to the governor, the remaining $92.4 million in decreased revenue for FY 2017 was due to “downward pressure on energy prices, and less economic growth than originally forecast for both the national and state economy.”

At $137.5 million, the state’s corporate net income and business franchise collections will be at an all-time low in FY 2017 if the revised estimates are realized. While this is largely due to the elimination of the business franchise tax and the reduction of the corporate net income tax rate from 9% to 6.5% in 2015, it highlights that the tax cuts failed to spur any supply-side effects and that these business tax cuts have made it much harder to fund crucial programs and services. At its peak in 2008 (the same fiscal year that the tax reduction went into effect), these two taxes accounted for $388 million in General Revenue Funds. In 1990, they accounted for over 12 percent of the General Revenue Fund budget compared to less than four percent today. 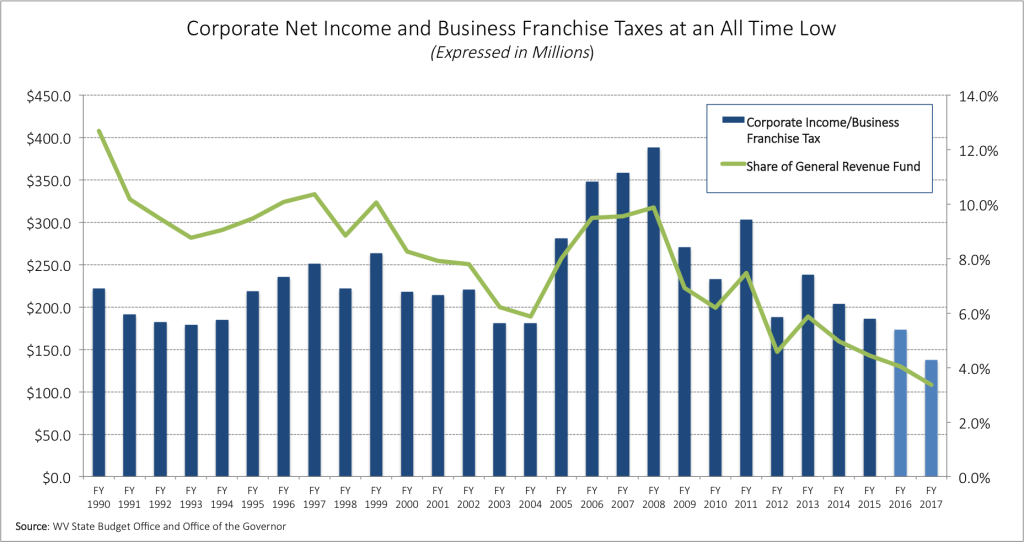 When the legislature reconvenes in early Spring to pass the state’s FY 2017 budget, it is clear that lawmakers will need to adopt additional revenues to avoid more harmful cuts in essential services and programs. As we highlighted in our recent analysis of the state’s budget this year, there are a number of avenues lawmakers could take to raise additional revenue in addition to what the governor is proposing, including expanding the sales tax to more personal services, modernizing the state’s personal income tax, adopting a higher tax on natural gas liquids, and scaling back or eliminating lottery funds subsidies.

When looking at revenue options, lawmakers should also consider taking a balanced approach that considers how tax increases would impact low- and middle-income families who already pay a higher share of their income in state and local taxes than the state’s wealthiest residents. This could include pairing any sales tax or sin tax increase with a refundable state Earned Income Tax Credit that would not only help balance out the negative impact of these regressive taxes but also help boost labor force participation, reduce poverty, and lead to better social and economic outcomes.