Repealing the Affordable Care Act: Hurting Our Health and Our Economy 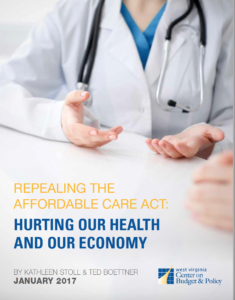 Repealing the ACA would have far-reaching effects throughout the Mountain State, including the dismantling of Medicaid expansion and the individual Marketplace, which would cause 184,000 West Virginians to lose their health insurance. West Virginia’s weak economy could falter with billions in federal funds evaporating, causing the loss of 16,000 jobs by 2019 and nearly $350 million in lost tax revenue over five years. Vital consumer protections for hundreds of thousands of West Virginians are at risk, including pre-existing conditions; insurance plan lifetime limits or caps; and free preventive care.

An ACA repeal could also decrease access to substance abuse treatments to battle the state’s opioid addition crisis with changes to Medicaid. As the debate in Washington about repealing the ACA continues, Congress and the President should continue deliberation while carefully evaluating any changes to the ACA that could increase health-care costs or lower the number of people with health insurance.