In November 2017, the WV Department of Health and Human Resources announced that they plan to modify the state’s Medicaid program through a waiver under Section 1115 of the Social Security Act in 2018. DHHR stated that they plan to align the proposed “work requirements” with the Supplemental Nutrition Assistance Program (SNAP) that imposes time limits or restrictions on unemployed adults that are not technically disabled.

While DHHR claims such a requirement for adults in the Medicaid expansion population will help “get folks into the workforce”, there is little or no evidence that such a move will increase employment of those enrolled in Medicaid. However, there is substantial evidence that it will drastically reduce health care coverage, increase administration costs, hurt many low-income West Virginians, and is contrary to the goals of the Medicaid program.

West Virginia has made significant progress under the Affordable Care Act including the Medicaid expansion, with the state’s overall uninsured rate dropping to 5.3 percent from 14 percent. A time limit or “work requirement” and other barriers to enrollment in Medicaid will not help West Virginia’s economy or improve the health of the state’s population, which is already one of the most unhealthy in the nation.

Over the next week, we will be publishing three blog posts examining the implications of implementing a “work requirement” for the state’s Medicaid expansion population. This will include looking at the importance of Medicaid and the Medicaid expansion under the ACA to the state’s health and economy, why so called “work requirements” fail to boost work, and how the proposed Medicaid waiver would reduce health care coverage for thousands of adults in West Virginia.

West Virginia’s Medicaid program is the state’s largest public health program, including approximately $3 billion in federal funds and $1 billion in state matching funds. Medicaid provides health coverage to more than 650,000 people per year in West Virginia. About one in three West Virginians – the highest in the nation – have health coverage provided by Medicaid. This includes thousands of working families, kids, veterans, seniors, pregnant women, and people with disabilities.

Over the last several years, West Virginia has established itself as a leader in reducing the number of uninsured in the state. The share of the working-age population (ages 18 to 64) without health insurance dropped from 21 percent to eight percent from 2013 to 2016 – the fourth largest drop in the uninsured rate in the nation. The central reason for the historical increase in coverage gains was the expansion of Medicaid to adults under 138 percent of the federal poverty level. Prior to Medicaid expansion, only adults with children below 17 percent of the federal poverty level qualified for Medicaid. Today, 168,000 West Virginians are enrolled in Medicaid expansion.

When Governor Tomblin and DHHR decided to expand in 2013, they outlined many of the benefits to West Virginia. This included creating “financial security for working families that experience medical hardships” and “end[ing] the disincentive to current Medicaid enrollees from working.” Governor Tomblin also found expanding Medicaid would reduce other budgetary costs, while adding billions to the state’s economy and health sector.

A 2015 report from Manatt Solutions found that West Virginia saved $3.8 million in 2014 from the enhanced federal match for pregnant women. The state has also saved money be having Medicaid cover costs for inmate care for those incarcerated. The ACA also allowed the state to close its high-risk health insurance pool, saving $4.8 million.

Based on independent analysis from other states. it is highly likely West Virginia also saved dollars in other programs such as behavioral health, community based services, public health, and disability services. Macroeconomic studies of Medicaid expansion have found that tax revenues would increase from the inflow of new federal dollars into the state. West Virginia hospitals have also reduced the amount they spend on uncompensated care largely because of the state’s decision to expand Medicaid. Between 2013 and 2014, about a dozen hospitals in West Virginia experienced a reduction of 47 percent or $265 million in uncompensated care.

Aside from budget savings and the direct economic benefits from Medicaid expansion on the state’s economy, Governor Tomblin also highlighted studies showing that expanding Medicaid would improve health outcomes that “translates into a more productive and effective workforce” with “decreased rates of delayed care and decreased mortality.” Rigorous research has shown that the Medicaid expansion in other states has improved health outcomes and access to preventive services. The Medicaid expansion is also a key part in the state’s fight in addressing the opioid epidemic, since many who qualify for Medicaid under the expans

The expansion of Medicaid has also helped fuel economic growth in West Virginia at a time when most major industries in the state have not recovered from the Great Recession. Between 2014 and the end of March 2016, approximately $1.8 billion of new federal funds have flowed to West Virginia to cover new adults in the state’s Medicaid expansion. As the chart below illustrates, employment in the health care and social service sector has reached new heights since the state expanded Medicaid in 2014. From January 2014 to November 2017, health care and social service sector jobs have grown by 4.7 percent (5,400 jobs) while overall job growth has declined by -1.5 percent (11,000 jobs) over this period. The health care sector now makes up 16.2 percent of total jobs – compared to 15.2 percent in January 2014 – and 9.8 percent of the state’s Gross Domestic Product (2nd Quarter of 2017) – compared to 9 percent in 2014 (1st Quarter of 2014). 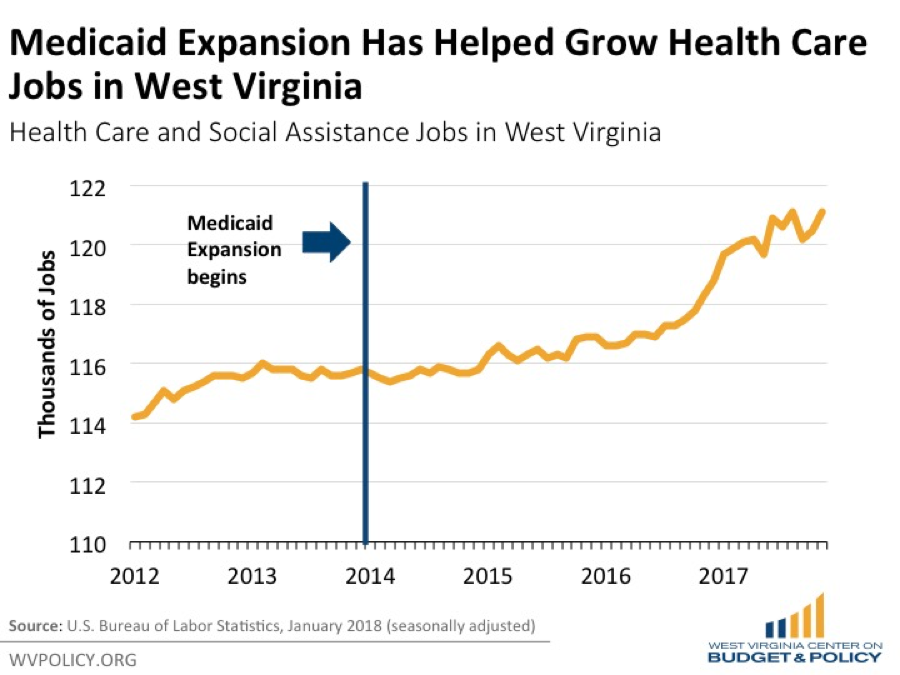 A 2017 study in the New England Journal of Medicine analyzed the impact of Medicaid expansion in Michigan and confirmed that it not only boosts economic activity and job creation, but that the state budget gains outweigh the added costs. The study estimated that Medicaid expansion will create over 30,000 jobs in the Michigan and that “[s]imilar economic benefits are almost certainly accruing to the other 30 states that have expanded Medicaid.”

It is clear that West Virginia has benefited greatly from Medicaid expansion, including its positive impact on our state’s economy, the budget savings being realized, and most importantly the 168,000 people that have health care coverage that most likely did not have it before. Imposing a “work requirement” on this population will take our state backwards. As the next two posts will highlight, not only would a “work requirement” likely be counter productive to the goals of Medicaid, but it would also mean reduced health coverage, poorer health, and could hurt our state’s fledgling economic recovery.