Blog Posts > Poverty Can’t Be Ignored When It Comes To Education
May 23, 2019

Poverty Can’t Be Ignored When It Comes To Education

With a special session on education reform looming, the Chamber of Commerce has weighed in with a “comprehensive” report on education outcomes in West Virginia. Like their previous report on the subject, the Chamber analysis focuses solely on education spending, concluding that West Virginia educational outcomes are too low despite the amount the state is spending on education. And, unsurprisingly, the Chamber concludes that directing tax dollars out of the public school system and into the private sector through charter schools and education savings accounts is the solution.

But with a single-minded focus on education spending, the Chamber once again misses the far more important factor of the economic and social conditions of the children in our schools. The Chamber’s report makes no mention of the well established connection between poverty and educational outcomes, despite the fact that 1 in 4 children in West Virginia are living in poverty, the 4th-highest rate in the country.

Looking at education outcomes with poverty in mind shows the stark effect that it has on children in disadvantaged households. For example, when controlling for the share of students who are eligible for free/reduced school lunches, West Virginia’s 4th grade math test scores jump from 37th to 11th, according to data from the Urban Institute. 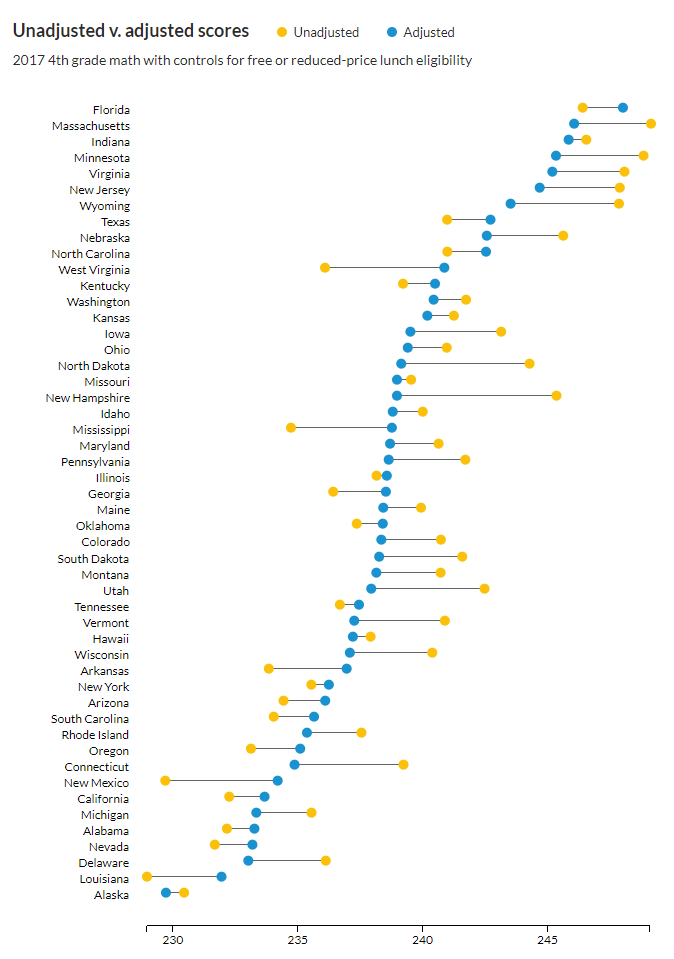 While the impact of poverty shows up in statewide educational outcome data, the impact is just as stark looking at individual schools, even in the same school district. For example, both George Washington High School and Riverside High School are in the Kanawha County school district. They both have similarly sized enrollments, both are governed by the same school board, with the same policies, bureaucracy, and curriculum. But George Washington High School’s math, reading, and science proficiency rates are 30, 23, and 36 percentage points higher respectively, than Riverside High School’s scores. So what is the difference between the two schools? Only 20% of George Washington’s students are eligible for free/reduced lunches, compared to nearly 40% for Riverside. Riverside has nearly twice as many low-income students as George Washington. Two schools in the same district with the same policies, and same funding source, with vastly different educational outcomes.

Looking at all the high schools in Kanawha County, there is a clear connection between low-income students and education outcomes. The following charts compare math, reading, and science proficiency rates with the share of students eligible for free/reduced lunch. And as the charts show, there is a clear connection, with the schools with a greater share of low-income students having lower proficiency rates. 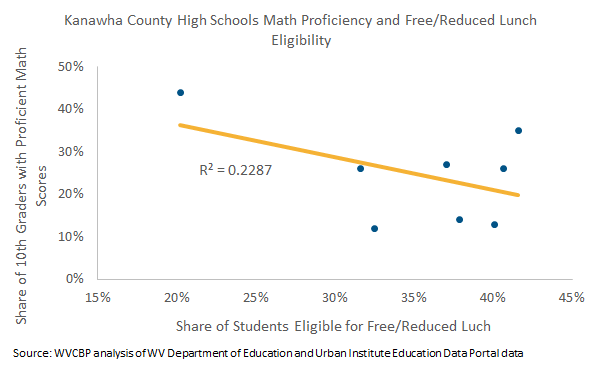 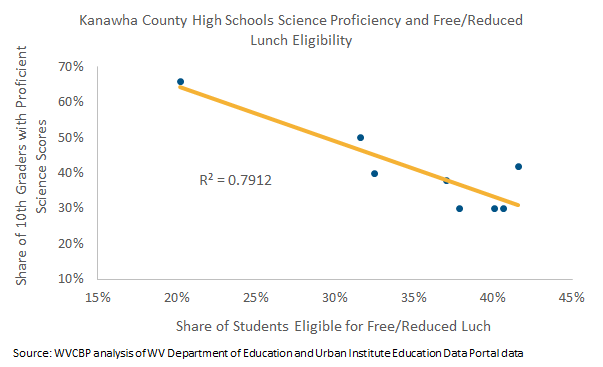 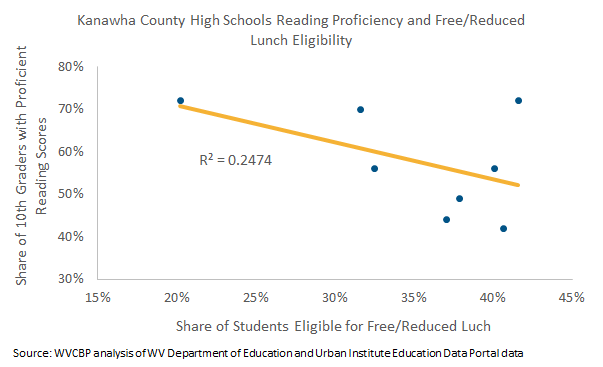 The vastly different educational outcomes within a single school district shows the folly of focusing on how much the state spends compared to other states, like the Chamber has consistently done. Most education reforms fail when they do not address the evidence that children in disadvantaged households on average perform less well in school. With a focus on the costs of education and the relationship between how much we spend and what our outcomes are, it is equally important to focus on the underlying problems like poverty that appear to play a much greater role. And if we want to lower child poverty in West Virginia, there are clear, evidence-based ways to do so at the federal and state level, such as expanding child care assistance, enacting a refundable earned income tax credit, creating a universal monthly child allowance, raising the minimum wage, to name just a few.