The West Virginia State Chamber of Commerce released an analysis of education spending in West Virginia, in light of the recent teacher strike over low pay and benefits. The report, subtitled “An Overview of Teacher Pay and Benefits, and Student Achievement,” contends that West Virginia is one of the top spenders per pupil on education, with an emphasis of teacher health and retirement benefits, but despite high levels of spending student performance continues to lag other states.

There are several shortfalls in the Chamber’s analysis of education spending. First, the analysis cites data from the National Education Association to show that West Virginia ranks in the top 15 states nationally for per pupil education expenditures, spending $3,000 more per student than the national average. However, that figure includes federal dollars, most of which from the Title I-A program that provides assistance to school districts with low achieving and low-income students. West Virginia gets a disproportionately high share of federal funding due to the fact that the state has a high share of low-income and low achieving students, so it makes sense that West Virginia would have higher expenditures when including federal dollars than states with higher achieving students. Since the Chamber’s report is drawing a connection between state spending and education performance, it makes little sense to include federal dollars. 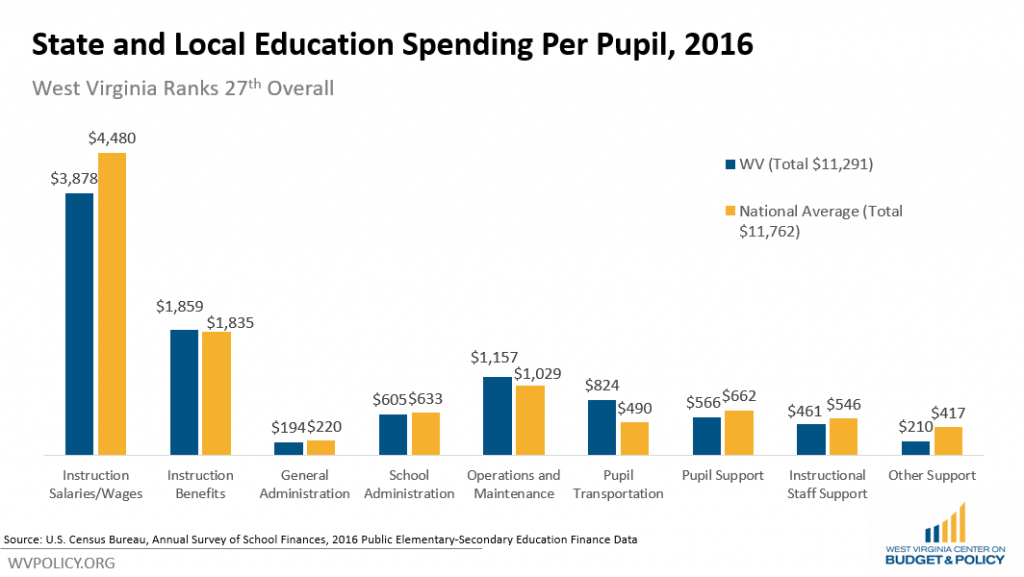 Of the major spending categories, West Virginia ranks significantly above average only on operations and maintenance and pupil transportation on a per pupil basis, ranking 14th and 5th highest respectively. On all other categories, West Virginia is below or near the national average. West Virginia ranks 31st in instruction wages and salaries, 21st in instruction benefits, 31st in general administration, 28th in school administration, 31st in pupil support, 34th in instructional staff support, and 43rd in other support. Despite this, the chamber’s analysis focuses solely on teacher pay and benefits. Further, the Chamber’s analysis doesn’t acknowledge that per pupil spending in West Virginia has been declining, and is down $1,400 since 2010, adjusting for inflation. 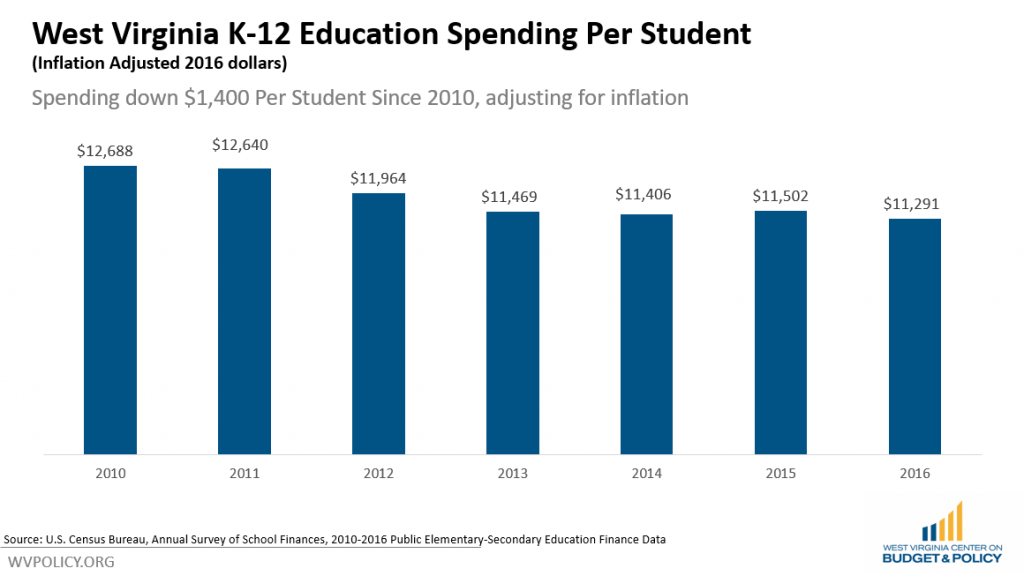 But the biggest problem with the focus on drawing connections between spending and student achievement is that it ignores that far more important factor of the economic and social conditions of the children in our schools. Nearly 24 percent of West Virginia’s children live in poverty, the 7th highest rate among the 50 states and D.C. A number of studies have shown that low academic achievement is associated with poverty, and that most education reform efforts fail because they do little to address the evidence that children in disadvantaged households on average perform less well in school. With a focus on the costs of education and the relationship between how much we spend and what out outcomes are, it is equally important to focus on the underlying problems like poverty that appear to play a much greater role.