The issue of other post employment benefits for West Virginia’s public employees has been discussed at length, here, here, and here. The growing cost of health care presents a real and substantial problem for our state budget. In 1973, PEIA medical expenses made up two percent of general revenue funds. This number increased to 10 percent in 1990, and 16 percent in 2009. This growth has “crowded out” funding for other priorities like higher education and is a serious concern for a state that has the lowest number of college graduates in the country.

Last week, the State Senate introduced Senate Bill 566, which would have reduced the retiree health care subsidy for public employees. It now appears that the bill has died in Senate Finance.

As we highlighted in January, the best way to address the growing cost of retiree health care is not to get caught up in the enormity of the OPEB liability. Rather, the focus should be on paying for retiree health care while finding constructive ways to lower health care costs. Unfortunately, SB 566 seems to focus solely on fully prefunding the OPEB liability and, in effect, ended the benefit for early retirees in about 10-20 years (see raw data here).

The first chart below shows that SB 566 would shift nearly the entire funding of retiree health care to retirees. Retirees currently pay for about 32 percent of their health care premium – under the proposed legislation, that share would grow to a whopping 82 percent by 2030. 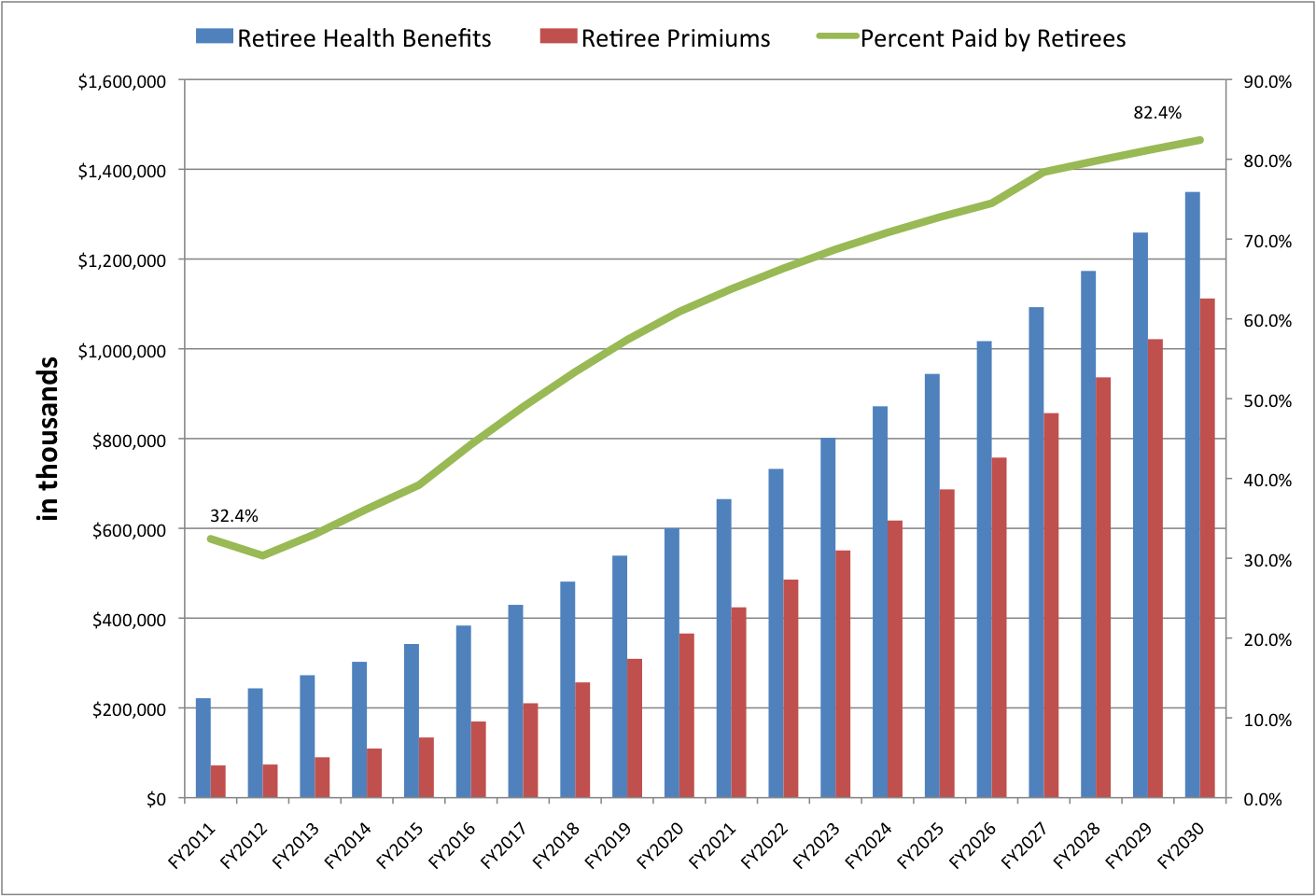 The second chart shows that in 2030 a retiree would pay over $18,000 a year in health insurance premiums, while pension income stayed fairly constant. For a retiree with a final salary of $50,000 in 2030, this would be about 53 percent of his or her pension income. Thus, most state workers would forgo retiring before age 65 even though they were “promised” this benefit in their compensation package when they were hired. 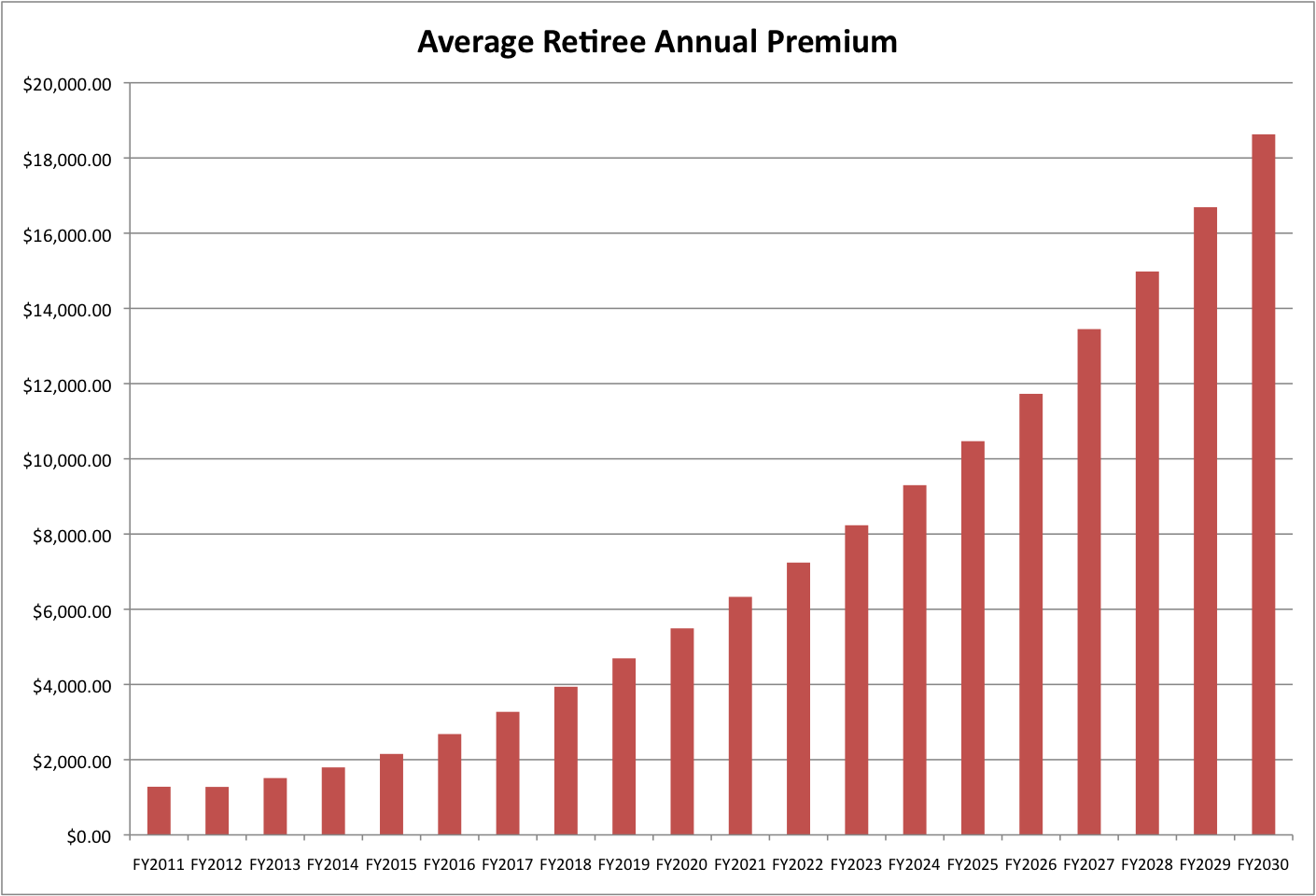 The last chart demonstrates that SB 566 would have drastically lowered the retiree health care subsidy, especially for early retirees. The red line shows the current PayGo – how much employers and employees pay toward the retiree health care subsidy. The blue line shows how SB 566 reduced the PayGo subsidy from the current projection, while the green line includes these changes but adds in the $50 million included in SB566 from an increased tobacco tax. As you can see, by 2030 SB 566 would reduce the subsidy by a projected $675 million, leaving retirees to foot almost the entire bill. SB 566 does little to tame
the underlying problem of the rapidly growing cost of health care and, in our opinion, focuses on eliminating the
retiree health care subsidy for the state’s public employees. 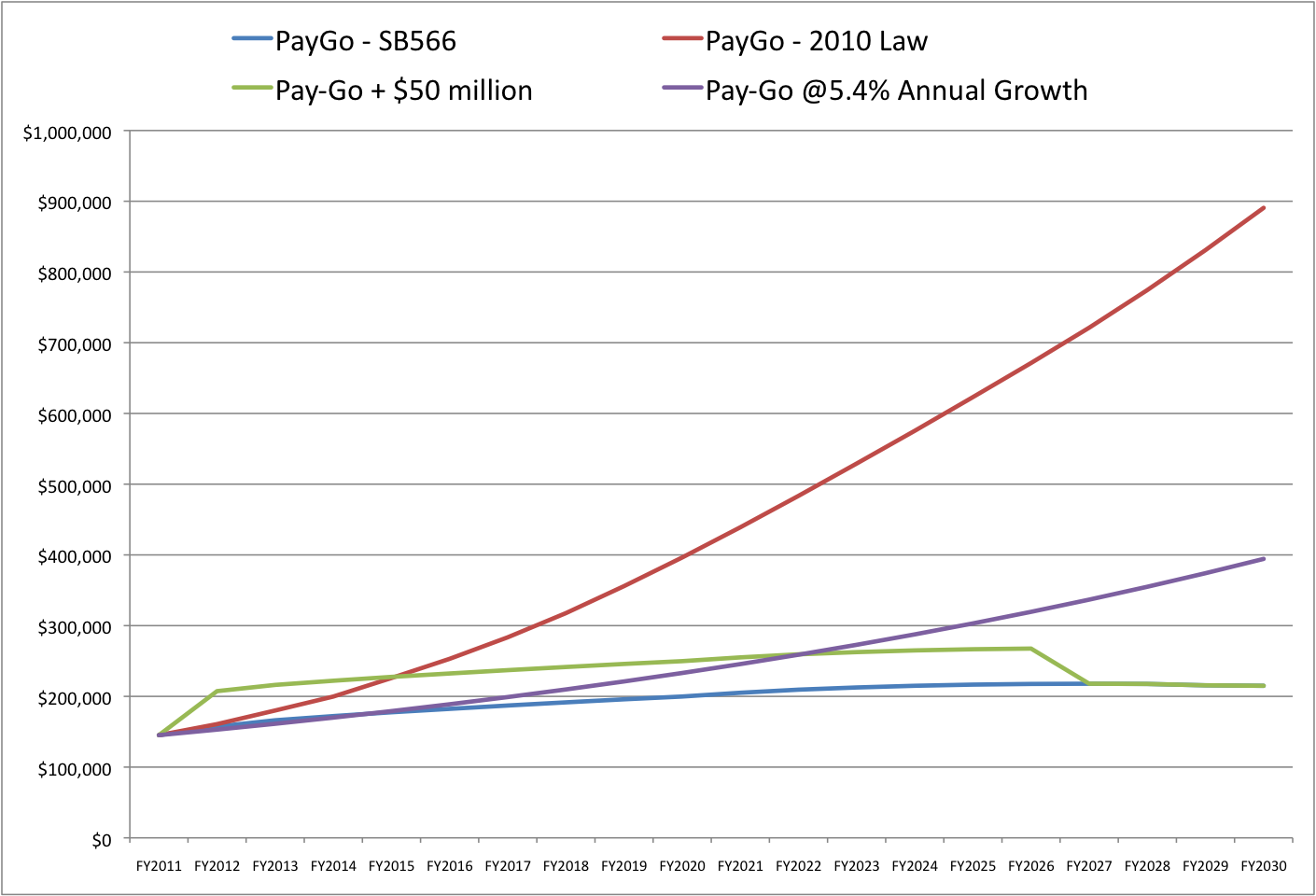 The focus should not be on ending the retiree health care subsidy, but rather on bringing it more in line with the natural growth of government services. According to Census data, West Virginia’s state and local governments grew at an annual average rate of 5.4 percent from 1990 to 2008. This is about the same as the national rate.

The purple line in the chart above caps the PayGo subsidy at this rate. As you can see, even if you capped the subsidy at 5.4 percent, it would provide a greater benefit for retirees than SB 566. In 2030, retirees would receive an additional $200 million toward their premiums. (If lawmakers decided to cap the PayGo subsidy at 5.4 percent, they should also look for ways to further compensate public employees since the subsidy is part of their benefits package)

If the Legislature decides to tackle this issue again in the near future, we hope that the focus will be placed on controlling health care costs rather than on drawing arbitrary lines in the sand to lower or eliminate public employees’ deferred compensation.