November Another Setback for Jobs in West Virginia 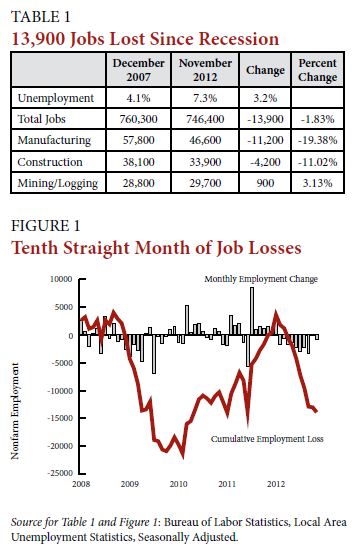 West Virginia’s construction sector experienced its worst month in more than three years, losing 1,200 jobs in November; a one month decrease of 3.4 percent. Construction’s losses dragged down the month’s total, as the state’s other nine major employment sectors added a collective 300 jobs in November.

The state also lost 300 manufacturing jobs, while the financial activities and professional and business services sectors each lost 200 jobs.

The mining and logging employment sector saw jobs grow by a full percentage point, adding 300 jobs, the sector’s first increase in three months. The leisure and hospitality sector also added 40 jobs, while the trade, transportation, and utilities, other services, and governments sectors each added 100 jobs.

2012 has been a poor year for job growth in West Virginia, with total nonfarm employment falling by 17,500 jobs. Figure 2 shows each employment sector’s performance since January. The government sector has lost the most jobs this year, with a decrease of 5,700, followed closely by the mining sector, with losses of 5,200. Only the education and health services sector is in positive territory so far in 2012, with 2,900 jobs added. 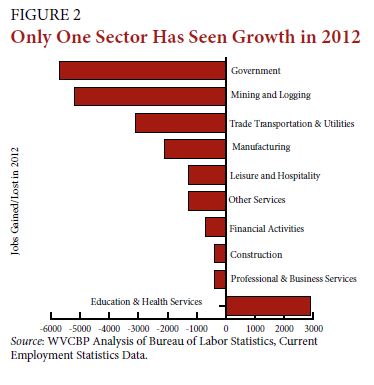 During the Great Recession, West Virginian’s actually saw growth in their personal incomes, a surprising trend that put the state in the top 10 nationally.

The safety net provided by these programs was crucial to West Virginia families between 2007 and 2011 during which income from net earnings, or wages and salaries, increased by only 4.6 percent (adjusting for inflation) while income from govenrment programs increased by 17.0 percent. The percent of total income coming from the safety net increased from 26.9 percent in 2007 to 27.5 percent in 2011. However, the share is down from its peak of 29.3 percent in 2009 (Figure 3). West Virginia ranks first among the 50 states in government support as a percent of personal income. Nationally, government programs account for 17.9 percent of personal income. 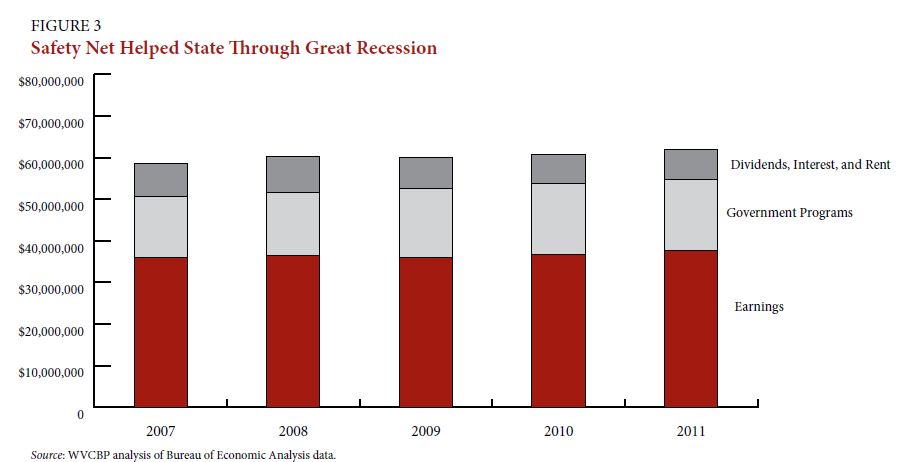 Major components of the safety net include Social Security payments at 34.5 percent, Medicare which accounts for 24.1 percent, and Medicaid at 16.0 percent. Income maintenance programs, including SSI and SNAP, make up 10.9 percent.

Without the income from these important programs, West Virginia families would have fared far worse, and the state would have likely felt the effects of the recession to a greater deal than it did.