The State Supreme Court heard several cases earlier this month on oil and natural gas property taxes that could have a significant impact on local government and school district finances, and also potentially impact the state budget.

At issue is how the State Tax Department calculates production expenses on natural gas wells. When valuing oil and natural gas wells for property taxes, the Tax Department allows a deduction for expenses. Under a legislative rule, the Tax Department is required to determine the average annual industry operating expense, and then deduct that average expense when determining the value of a well for property taxation. The deduction is capped at 30% of gross receipts, not to exceed $5,000, for conventional wells, and 20% of gross receipts, not to exceed $175,000, for horizontal wells.

Antero and Consol natural gas companies have challenged the cap, arguing that the deduction should not have a limit. If the Supreme Court rules in their favor, local governments would stand to lose millions in property tax revenue. According to the Tax Department, producing oil and natural gas property tax revenue totaled $93 million in 2017. 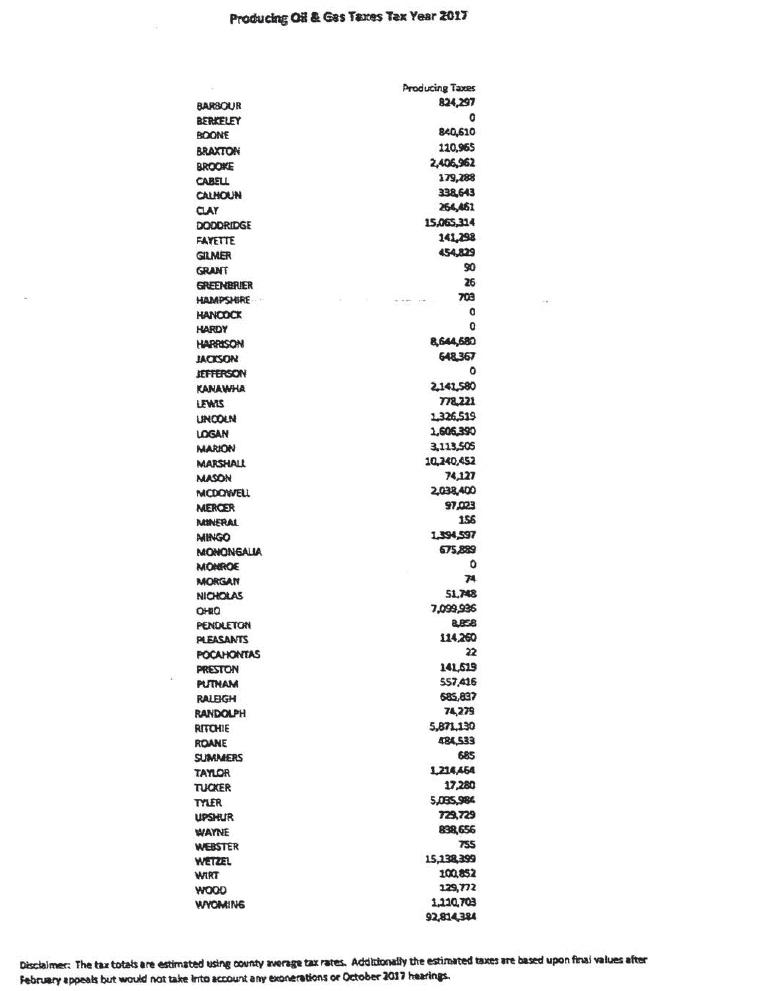 A brief filed by the WV Association of County Officials described the impact on individual counties, and what the loss of revenue would mean. This included delaying or canceling capital improvements, increasing taxes on residential taxpayers, loss of school excess levy funds, loss of emergency services levy funds, law enforcement and other local government staff reductions and pay cuts, and delayed and canceled maintenance.

The ruling could also affect the school aid formula, increasing costs to the state budget. For example, Steve Paine, the West Virginia Superintendent of Schools, filed a brief estimating that the state would have to increase it’s share of the school aid formula by $12.8 million to offset the lost local share revenue. County school districts would also lose $15.8 million in excess levy revenue, and $2.4 million in regular levy revenue that would not be replaced by the state.

A ruling in the oil and gas companies favor would significantly shrink the property tax base for a number of counties. Counties that stand to lose out of significant amounts of revenue would be forced to raise taxes on what remains of their property tax base, which would largely be on homeowners, or substantially cut important services like law enforcement and emergency services, which are largely funded by property taxes.

A ruling in favor of the oil and gas companies would in effect be a substantial tax cut for an industry often takes more than it gives. The property tax, like the severance tax, is one of the most important ways that we can insure that the state and its people benefit from natural gas extraction. While the economic promises of the industry have fallen short, the property tax helps make sure that local governments aren’t left holding the bag.