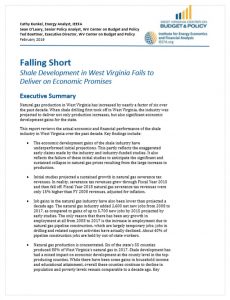 The nearly six-fold increase in West Virginia’s natural gas production in the last decade, due largely to shale development, or fracking, has fallen short of expectations for economic growth, job creation, and tax revenue generation, according to a new report released by the Institute for Energy Economics and Financial Analysis (IEEFA) and the West Virginia Center on Budget and Policy. Read report.

The report, Falling Short: Shale Development in West Virginia fails to deliver on economic promises, finds that the shale industry has underperformed economically due to the falling price of natural gas, which has cut into the industry’s profits and under-delivered state tax revenues. It has also missed expectations of creating jobs, reducing poverty, and spurring wider economic growth.

The paradox of a region rich in natural resources that fails to develop economically is known as the “resource curse.” The report asks how West Virginia, which historically exhibits signs of a “resource curse” in the coal industry, can avoid a similar fate with natural gas.

The report recommends increasing the severance tax rate from 5 to 10 percent on all minerals, or at least natural gas, natural gas liquids, and oil that are mostly coming from shale development. Proceeds would finance a Future Fund to diversify economic development and promote state initiatives that rely less on resource extraction and the vagaries of energy markets.

Early studies failed to anticipate the collapse of coal mining, driven in large part by the glut of inexpensive shale gas.

“Today, the natural gas industry is again promising significant economic benefits from what it sees as the next big opportunity: Appalachian petrochemical development,” said IEEFA energy analyst Cathy Kunkel, adding, “We find that such claims are likely to be overstated.”

West Virginia has a long history of economic boom-and-bust tied to coal extraction. Despite its vast natural resource wealth, the state has consistently ranked among the poorest in the nation.

“We are looking at how West Virginia can avoid repeating the same mistakes it has with the coal industry and use its natural gas and other resources to contribute to lasting in-state wealth,” said Ted Boettner, Executive Director of the West Virginia Center on Budget & Policy.